Less Than 12 Hours To Save Arya From Dying Of Liver Failure | Milaap
This is a supporting campaign. Contributions made to this campaign will go towards the main campaign.
This campaign has stopped and can no longer accept donations. 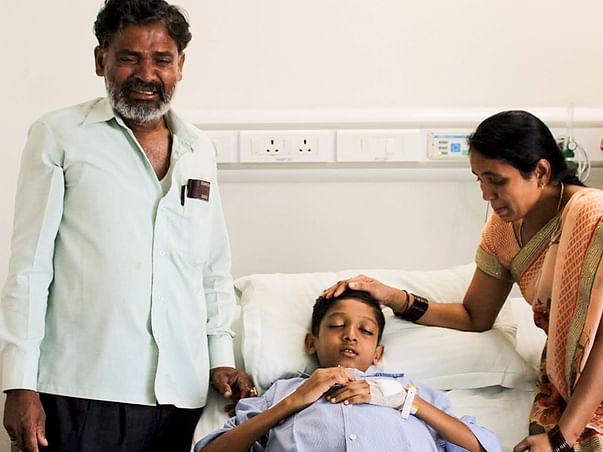 "He is dying right in front of me. I cannot watch this. I can't let him see me cry either."

Govind Raju just ran out of his son's room in the ICU to the driveway of Aster CMI so he could cry. In just a day, Arya's condition deteriorated so much that he needs a liver transplant within the next 12 hours. Govind Raju's wife, Parameshwari is going through pre-transplant work-up. His son lies in the ICU writhing in pain, crying silently so his parents do not hear him.

13-year-old Arya never complained of fever, headache or stomach ache. Growing up watching his parents struggle, he always spared them a visit to the doctor by not confiding in them whenever he fell sick. About a month ago, Arya's sister saw him vomiting multiple times, even after he took a sip of water.

"He made her promise not to tell us. The next day, it got worse. We saw him vomiting so many times, when my daughter told us he has been sick for a week. At the Ayurvedic hospital in our town, they tested his blood and scanned him. They said he has jaundice. Those tablets did not work. He started vomiting blood." - Govind Raju

His condition was stable until a few hours ago

In Bangalore, Arya's tests showed that his liver is completely damaged. The only cure is a transplant, and the parents were prepping for the procedure. They knew they had time Parameshwari was identified as a donor match, and Govind Raju began calling everyone he knew to arrange for funds.

"Suddenly a few hours ago, he was taken into the ICU. It looks like he may not make it past tomorrow. He needs the transplant in the morning at the most. Right now, we feel helpless." - Govind Raju

Since the liver is completely damaged, there is a lot of fluid retention in Arya's stomach. He clutches at his stomach, and clenches his teeth trying not to scream. Just now, they removed about 2.5 liters of fluid backed up in his abdomen. Slowly, his other organs are getting affected. He may soon slip into a coma.

"He may not tell or show us. Just watching him lie there like that is breaking my heart. I'm his father. I know him. I know what he is going through even if does not want to talk about it. He just says, 'Appa, please get me discharged. We will go home. Akka will be alone,' knowing that he will not survive."

15 lakhs in less than 12 hours is impossible to arrange

Govind Raju is losing hope that he can save his son. As a farmer he makes Rs. 2 lakhs in a year. His children are studying in high school and he has been trying to save up for college. He has spent upwards of Rs. 50,000 already on the treatment back in their town in Mysore.


"My son is giving up. I don't want to. I need to find a way to keep him alive. He has even stopped playing on the mobile like he used to last week. He talks to his sister like it is the last time. Whenever he closes his eyes, my wife checks to see if he is still breathing. We cannot survive his death. We need help to save him."

Arya's sister is back in their town, blaming herself for her brother's state. He is now unable to even breathe without wincing in pain. The clock is ticking, and this family is nowhere close to arranging the money they need not just for the transplant but also for post-transplant care.

THE ABOVE CASE IS SUPPORTED UNDER AFFORDABLE LIVER TRANSPLANT INITIATIVE:
Estimation letter 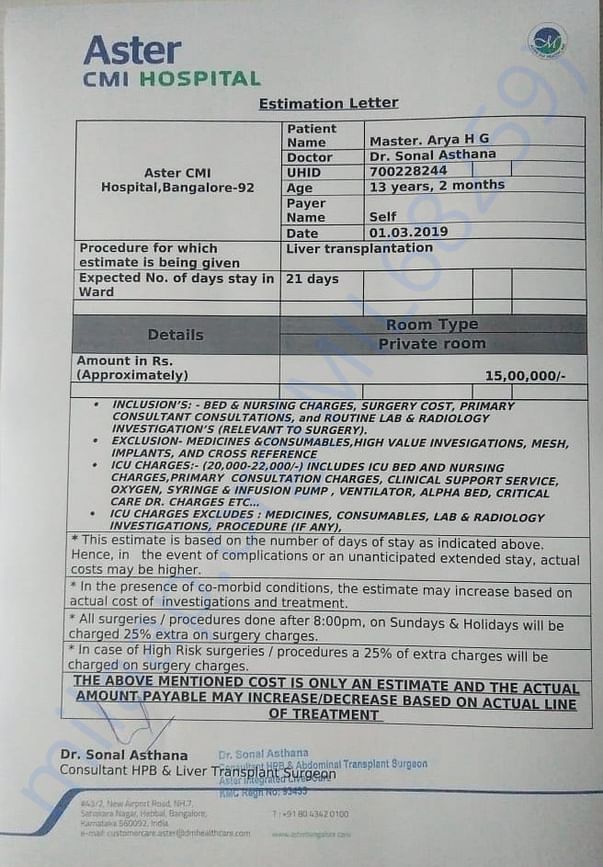 We regret to inform you all that Arya has passed away despite of his treatments. He had fever prior to the discharge and that affected him badly.

All the funds raised will be utilzed towards his medical expesnes.

Thank you for the immense love and support! Here is a quick update :

We have some good news to share. Arya's liver transplant was a success. He is still under observation in the ICU. Hopefully, all will go well.

Thank you once again for your support. Do pray for him to recover fast.

Donated to this campaign via Paytm? Click here if you can’t find your donation listed below.
TP
The Pravin Agarwal Foundation donated Rs.250,000

Donated to this campaign via Paytm? Click here if you can’t find your donation listed below.
TP
The Pravin Agarwal Foundation donated Rs.250,000 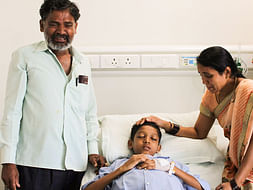