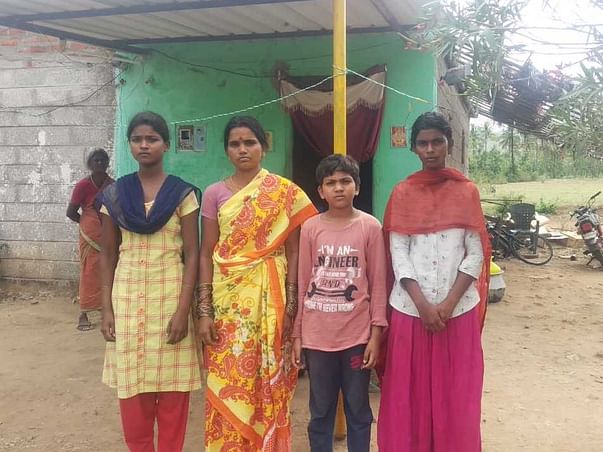 “Every charitable act is a stepping stone towards heaven”. Your little help to Mrs. Annakili Murugesan whose husband was brutally killed by police assault will go a long way in bringing a smile to the affected family.

Murugesan along with his wife and 3 children (two girls and a boy – Jayapriya (F) age 18, Jayabrindha (F) – age 17, and Kavipriyan (M) age 14 were residing at Edapatti (near Valapadi at in the district of Salem, Tamil Nadu). They were farmers hailing from a poor background.

Mr. Murugesan was the sole breadwinner for the family. Their agricultural income was less than 1lakh per annum and it merely supported his family.

On 22 of June 2021, Murugesan was attacked by policemen at Kalvarayan Hills check post. The attack turned fatal. The video of Murugesan getting attacked was captured on a cell phone and it went viral on national televisions. Though the Tamil Nadu Government has filed a complaint against the policemen who perpetrated this heinous act, Murugesan’s family is left in the lurch.

Now that family has lost its sole breadwinner, the family will be facing a lot of financial hurdles. I'm requesting all kind-hearted donors to donate liberally to help Mrs. Annakili Murugesan support her children’s education and family.

Donate
50 supporters
1%
Raised
Rs.43,611
of Rs.50,00,000
Only INR donations accepted towards this cause
Card, Netbanking, Cheque pickups
Or Donate using