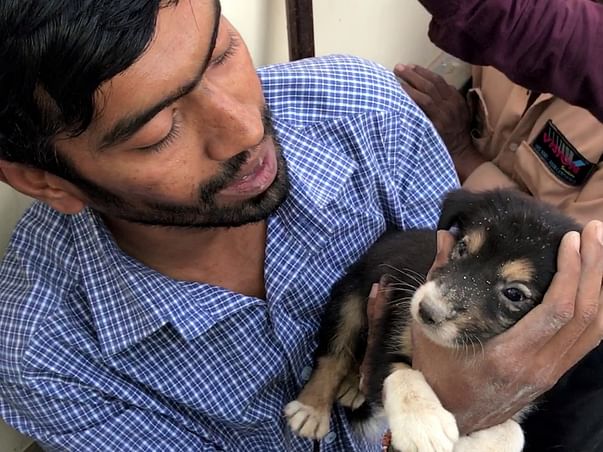 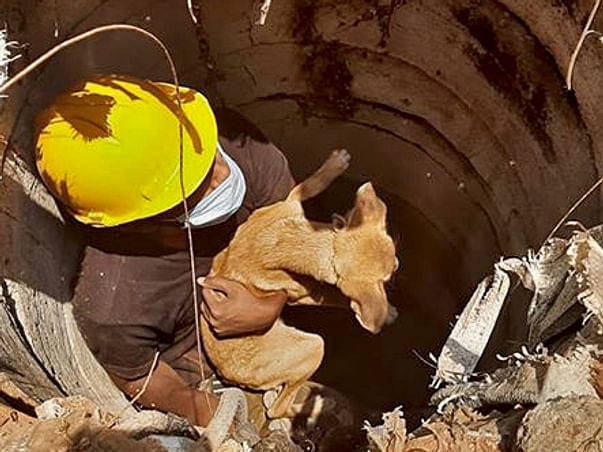 Previous Next
I am Pradeep Nair, born and brought up in Telangana. I moved to Hyderabad in 2005 after my B.Tech. I worked as a freelance web developer and also as a Senior UI developer. Being an animal lover since childhood, I always feel excited being around animals. I used to save animals whenever they are in need. When i moved to Hyderabad, I came to know about the existence of organizations working towards animal welfare. I volunteered myself in those NGOs and learnt much about handling animals in distress. I became an active animal rescuer since then. This experience helped me a lot in learning the techniques of animal rescue. I was more involved into tactical rescues such as when a dog fell in a well, or a bird got stuck in manja on a tree, or a kitten fell into 70ft borewell and I fine tuned my skills needed for tactical rescues. After so many years I see very less people volunteering with NGOs on field. I felt there is a need to expand the army of rescuers. In 2015, I started "Animal Warriors India" with an agenda of training more and more youngsters to become true animal activists. Often I see people who love animals but don't know how to help them in right way. We formed a team of around 18 well trained rescuers who now volunteer with all the NGOs of Hyderabad to save more animals. We brought up a new system called pocket shelters where an injured animal is rehabilitated at someone's house, easing resources of an NGO. By this more people started involving in animal activism and helping NGOs by giving space to injured animals. 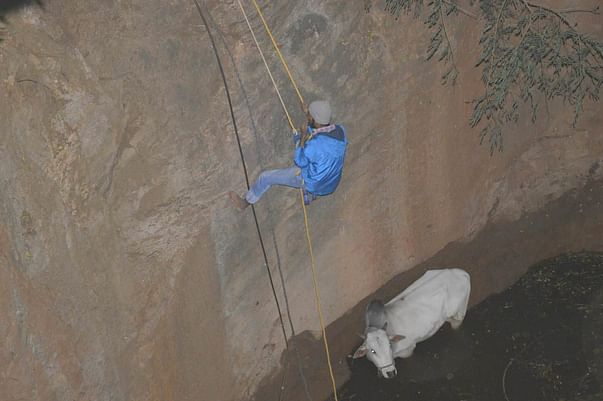 In the last 14 years, I have rescued more than 70000 animals like dogs, cats, buffaloes, snakes, birds etc. Me and my team were also involved in the animal rescue efforts during Kerala floods and cyclones in Andhra. We managed to rescue 327 animals in 10 days of rescue efforts during Kerala floods. I also fostered more than 40 disabled animals in these years. 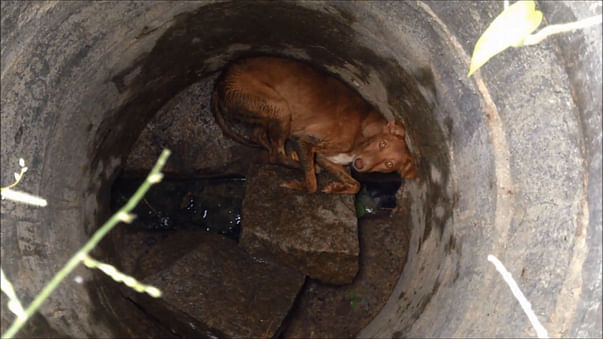 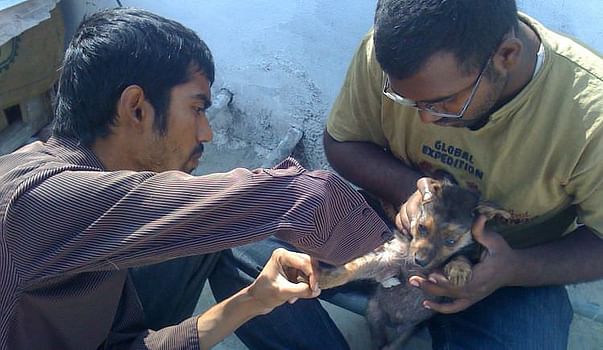 Since the lockdown started in India, Animal Warriors India has been committed to feed stray animals in remote areas and tourist places which are dependent on food stalls during lockdown. These stray animals are not able to find food as all these food stalls are shut during lockdown and no humans or tourists are around to feed them. We are feeding around 1000+ such dogs daily in different parts of India namely Hyderabad, Vizag, Ongole , Chirala. 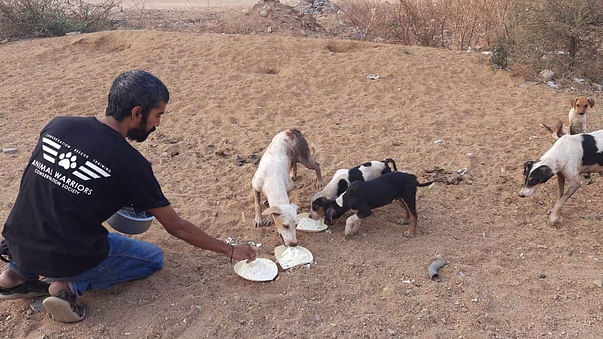 With an experience over 14 years we have saved more than 70,000 animals from distress situations. Annually we rescue around 1000 animals including stray animals and wildlife. We focused on saving animals in more tactical way in situations like borewell or manja rescues. With a high rise in such rescues our equipment are used at their maximum limit. It is becoming danger to us to continue the work with our equipment. We need better safety equipment to deal such kind of rescues to ensure safety of animals and rescuers. For rescuing injured animals, we are dependent on hiring private vehicles to shift injured animals, which we are not able to afford regularly. If it is a large animal then it is costing us around 3000INR per rescue. And its becoming hard to find vehicles due to lockdown restrictions. We need to buy a rescue vehicle to shift injured animals to shelter. 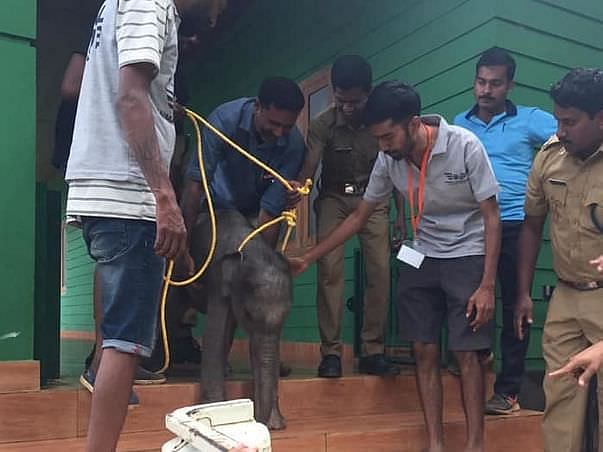 We need your help: 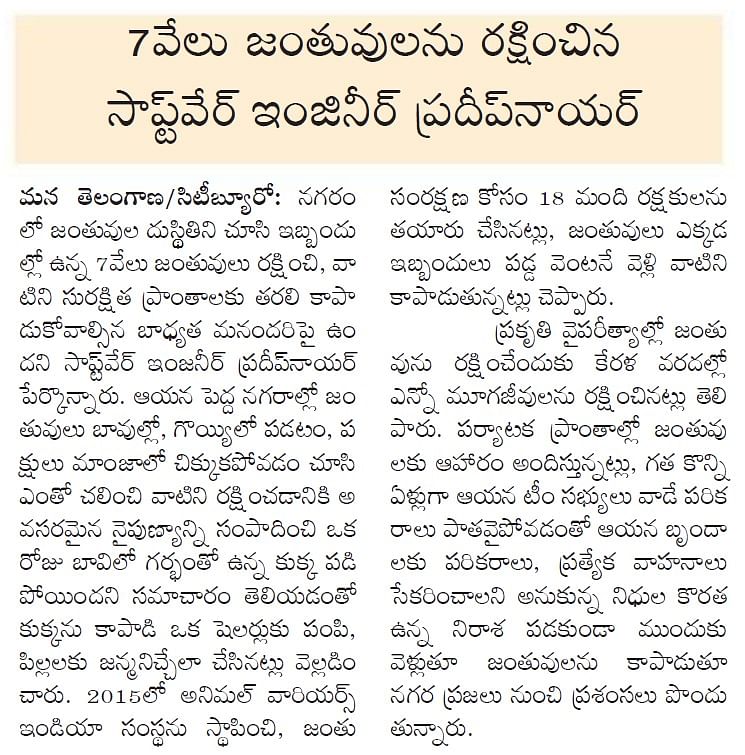 Thank you for your support for this campaign.

We are happy to inform you that this fundraiser has been covered by ‘Mana Telangana’ publication on December 14th 2020. You can read the story below:

We hope this will help the “Animals Warriors Conservation Society” the love and support it deserves from more and more generous supporters like you.

Thank you for your support for this campaign.

We are happy to inform you that this fundraiser has been covered by 8 New Age Media Web Portals on December 12th and 13th 2020. You can click the below links and read the stories:

We hope this will help the “Animals Warriors Conservation Society” the love and support it deserves from more and more generous supporters like you. 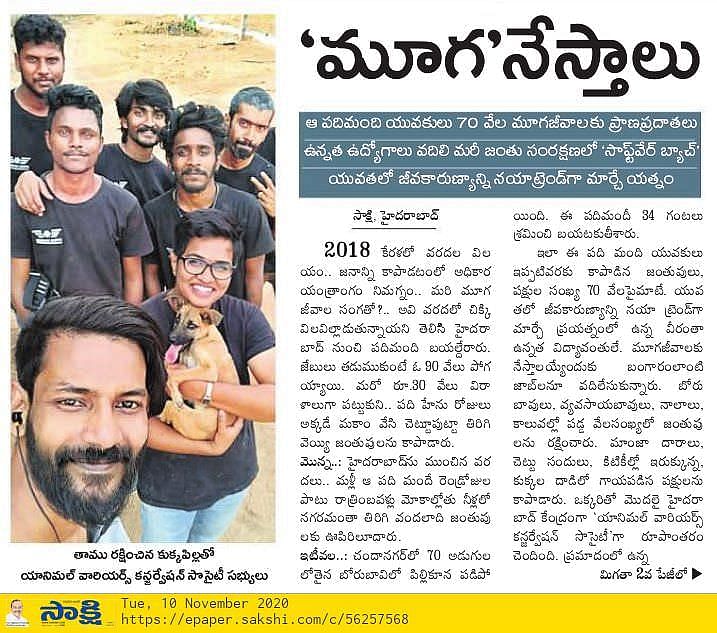 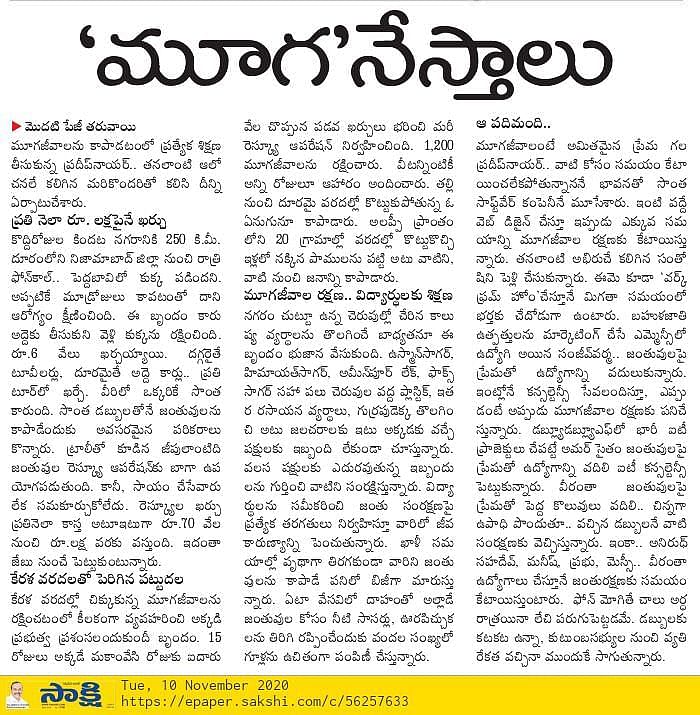 Thank you all so much for contributing and supporting the campaign so much.

We are based in Hyderabad and we have extended our services in Andhra Pradesh and Telangana. During floods we handle total South India for relief works. I am withdrawing amount to Pradeep (my account) , Founder & President of AWCS. The fund needs to be utilized for procuring if equipment needed to rescue and for the shelter. We bought  used rescue vehicles and bought few equipment used to save animals from wells and other situations

This campaign is benefitted by animals which we rescue. 1000s of animals being saved by us annually using the equipment which we bought and sheltered with us. We need to reach the target of 20 lakhs so that we can help more and more of our furry friends. Still a long way to go ahead and we need your help in this.

Please do kindly help and spread the campaign among your network.

Scan & donate with any app
check_circle_outline Download payment receipt
Report fundraiser
See how thousands are crowdfunding for their causes on Milaap
Rs.881,651 raised 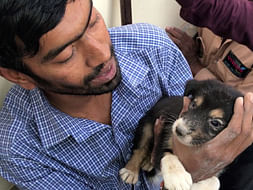