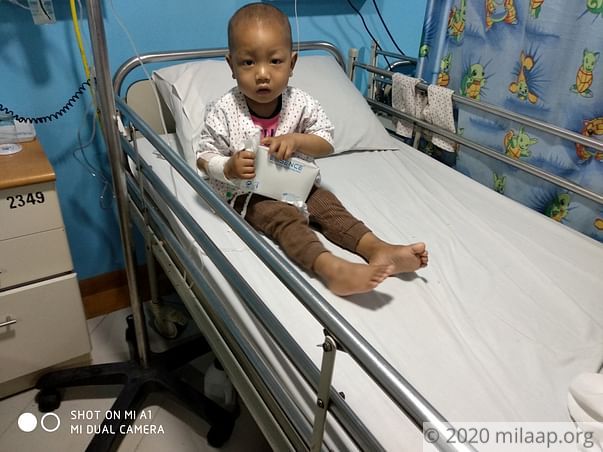 Pradeep Tisso, retired from the army after serving the nation for 17 years, is fighting valiantly to save his 2-year-old son, Alon from cancer. Pradeep and his wife, Deepika, have done everything possible, including travel to several different states in India, but now, their financial condition is making it difficult to provide for the much-needed treatment.


Pradeep, Alon and Deepika at the hospital

2-year-old Alon is suffering in pain

They went to the hospital because their small baby had a severe pain in Alon’s leg along and jaundice. Pradeep and his wife, Deepika, never expected that their 2-year-old baby would have Acute Lymphoblastic Leukemia, a fast spreading deadly blood cancer.

If untreated, it could prove to be fatal in a matter of months. Pradeep wants to get his son treated immediately, but it is becoming very difficult for him to do so. To survive, Alon needs chemotherapy but Pradeep’s struggle to get him treated in the first place proved to be very costly and now, he has nothing left to help his son.

Alon and his parents have visited hospitals in different states

Residing in rural Assam, the hospital in Pradeep’s village didn’t have the equipment needed to treat Alon. He was directed to a medical college in Guwahati. Pradeep went there, but they got very less attention and care there and he decided to go to a hospital in Nagaland instead.

On reaching there, Alon’s cancer was confirmed but that hospital too, didn’t have the equipment to treat Alon. Meanwhile, the 2-year-old’s condition wasn’t improving.


“I finally asked them where could I go to get my son treated right away. They said Shillong or Delhi. Delhi is so far, but I couldn’t even afford a trip to Shillong. After going home, I spent a month collecting money before we could go anywhere. We were very scared that month because Alon’s condition was clearly worsening.” – Pradeep

Through some help, Pradeep was able to get his wife and Alon to Delhi in August 2017. Being a retired army official, Pradeep’s grit and mental fortitude paid off but the expenses have taken a massive toll on Pradeep’s financial condition to a degree that he had to even give up his home.

Pradeep sacrificed his home as a collateral for a loan

When Alon was admitted, he was very critical. His eyes were red and limbs were swollen. From August 2017, Alon underwent chemotherapy cycles.

“We have been in Delhi since August. Alon still needs additional chemotherapy. Delhi has been so expensive. We stayed in a very small home to save money. I have used all I had for Alon’s treatment including the Rs 2.5 lakhs which I got through a bank loan. I needed more to help my son so I put my house as a collateral for a loan of Rs 1 lakh from my acquaintances. Now, I don’t know how I’m going to get it back but I need to save my son first.” – Pradeep

Pradeep has served India in the bravest possible way

“I will fight. I’m an army man and I need to fight against this. I will do anything to save Alon.” – Pradeep

After joining the army at the age of 18 in 1997, Pradeep served India for 17 years as a soldier. He was even a part of the war in 1999. He retired in 2014, but he still has the determination ingrained in him due to his time in the army.

Unfortunately, he has exhausted all he had and needs help to provide for 2-year-old Alon’s additional chemotherapy. His service and brave sacrifices for India are extremely honorable and now, he has sacrificed and fought valiantly to help his son fight cancer.

“Even after the chemotherapy, we have to remain in the hospital for 2 months. If Alon gets discharged, we can go home, but every month, I’ll have to travel 36 hours (by train) to reach Delhi for Alon’s follow-ups. It surely is hard, but I will do anything to save him.” – Pradeep

The total cost of Alon’s treatments and medications is estimated to be around Rs 6 lakhs. Pradeep has exhausted all his funds and borrowed from everyone he knows. He is left with no option but crowdfunding.

2-year-old Alon is suffering from blood cancer and his only hope of survival is to get additional cycles of chemotherapy. His father, Pradeep, a retired army official, has nothing left to save him and now needs our help to save his son.

Your support can save 2-year-old Alon. 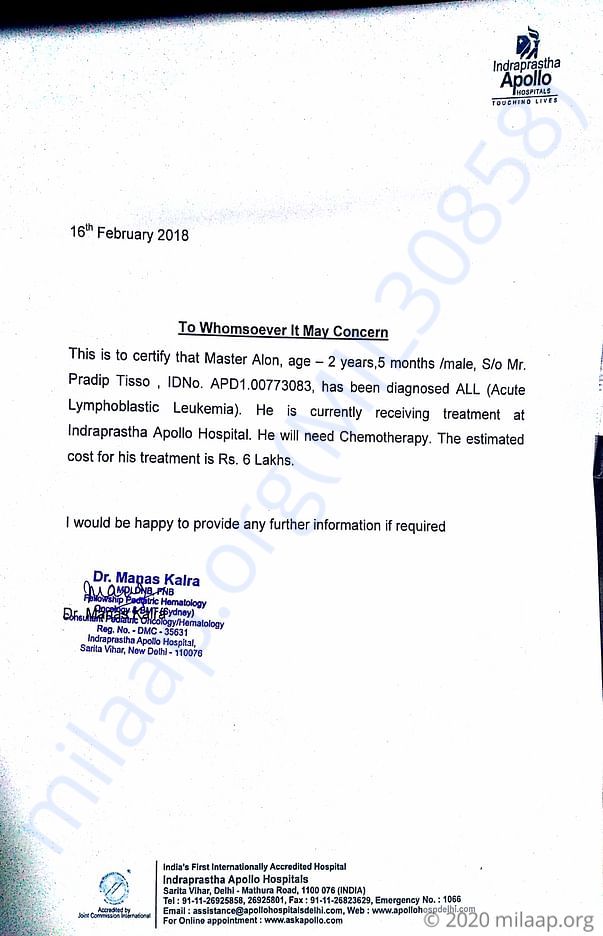 Alon is currently at home and recovering well. He has not faced any complications yet. We will keep you updated on any further progress reports.

Thank you for the love and support given to Alon.

I would like to inform you that he is presently being treated with chemotherapy and is reacting well to the same.

We are very hopeful of a speedy recovery soon. Please continue to pray for his health. Once again thanking you all.

Alon has completed his intensive treatment and he is showing signs of improvement. He went to his hometown,and will be coming for regular monthly follow-ups. We will keep you posted on his further condition.

Report fundraiser
See how thousands are crowdfunding for their causes on Milaap
Rs.751,886 raised

Donated to this campaign via Paytm? Click here if you can’t find your donation listed below.
JL
Joffrey donated Rs.500

Wishing him a speedy recovery and a healthy life ahead

Donated to this campaign via Paytm? Click here if you can’t find your donation listed below.
JL
Joffrey donated Rs.500

Wishing him a speedy recovery and a healthy life ahead 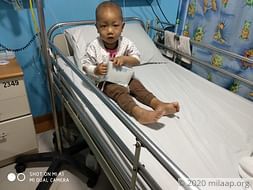