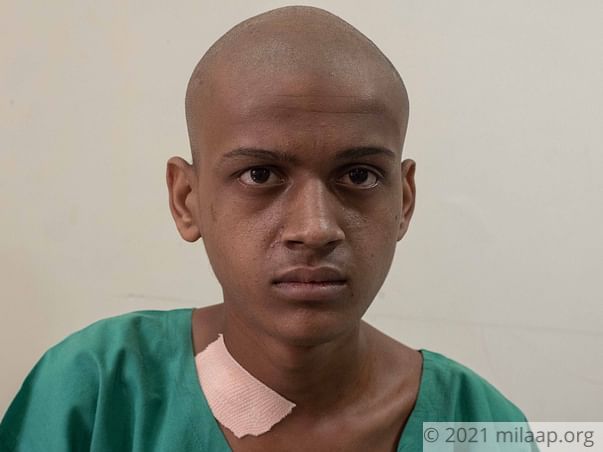 Share
During his class 11 final exams, Akshay used to stay up all night, revising his lessons despite Sulaha telling him many times to sleep. Akshay was adamant that he had to be thorough with his lessons. While studying, he often glanced at the torn out sheet from his notebook stuck on his wall that read “90%”. He kept his eye on the goal and worked hard in the hope that one day, he will become a chartered accountant and make his parents proud. Akshay passed his exams with flying colours, but just as he was going to start going to class 12, a crucial year for him, he was diagnosed with blood cancer.

A ray of hope for Akshay

The only cure for Akshay’s cancer is a bone marrow transplant. Fortunately for him, his younger brother Om is a matched donor, and he got the transplant on 25 December. However, his fight isn't over yet. He needs to stay in the ICU for two more weeks to recover. While there is hope for Akshay, his parents are running out of time and money. Without the post-transplant care, all their efforts will be in vain.


Akshay and Om during one of their visits to the beach

“We’re in the hospital now, waiting to find a way to continue his treatment. Om, as young as he is, said that he would do anything to help his bhaiya (brother). He doesn’t know that Akshay has cancer, but he understands that something is gravely wrong. Akshay is only waiting to go back to the life he knew.” – Sulaha, mother

As daily wagers, they’re struggling to afford his treatment

Sulaha occasionally works on others’ farms for a mere 100 rupees, while Samadhan works as a helper in a company, earning around Rs. 150 per day. However, his work is irregular and there are months when he comes back home empty-handed.

“It always depends on if they need labour or not. On the days that they don’t, I have nothing to do. But they were extremely helpful. Everyone in the company donated whatever little they had and helped us start his chemotherapy treatment. Now we need funds to continue his treatment. We can’t ask anyone for such a large amount.” – Samadhan, father.

Akshay has his whole life ahead of him. He has many dreams and aspirations, and as the oldest child, he feels a sense of responsibility towards supporting his parents. When he’s not studying, one can find him playing cricket with his friends in the nearby field. Unfortunately, Akshay can’t do anything that he loves anymore. Due to cancer, he not only looks different but is also getting weaker with each day. Akshay can beat cancer if he gets timely treatment. He needs your help.