Severe Infection After Complicated Surgery Has Blinded 3-Year-Old | Milaap
This campaign has stopped and can no longer accept donations. 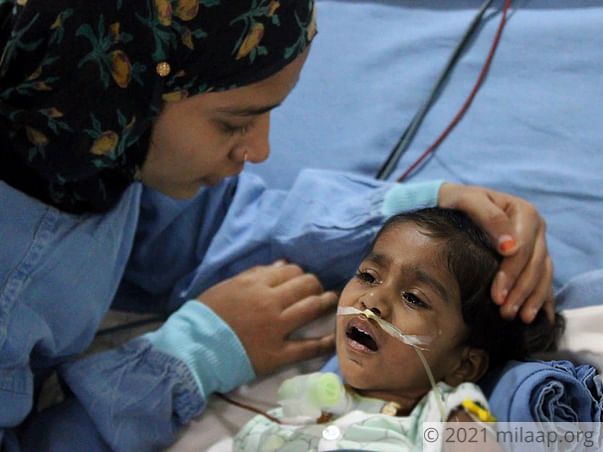 Little Aiyan Khan is just 3-years old but he has undergone 4 surgeries since he was 8 months old. Born with a hole in his heart, Aiyan has never been able to play like normal children as a result of his weak heart. His parents Imran and Farzaana thought that he would be active once he gets one open heart surgery. But they never imagined that he would need 4 complicated surgeries for his failing heart and his blocked windpipe. Post surgery, Aiyan developed severe infection that has spread to his eyes and blinded him, and now he needs ICU stay to recover. Unfortunately, his poor parents have no money left to continue his ICU stay.

He was found to have excess flesh near his heart, just a few months after his first surgery

Even before Aiyan was born, Imran and Farzaana were told that he had a hole in his heart and he needs an open heart surgery immediately. As  he was too young to undergo a surgery, his parents waited. But 8 months after his birth,  with the help of Arogyasri scheme provided by the government, they could get his son undergo an open heart surgery.


“Aiyan was slowly getting better. He didn’t had any trouble in breathing and he was able to actively run around our house. We thought he will live a  healthy life. But we were wrong. During a regular follow-up with the doctor, we found out that there was excess flesh growing near his heart because of which his heart had very poor functioning. We were told that he needed another surgery.” - Farzaana (mother)

Aiyan underwent one more surgery to remove the excess flesh near his heart, but unfortunately the operation was unsuccessful. 4 months later, he underwent the same surgery. It was during the surgery the doctors found out that Aiyan had severe lung infection and his windpipe is completely blocked because of which he’s unable to breathe.

He needs to stay in ICU to recover. If he doesn’t, he won’t get better.

Although the surgery was a success, Aiyan needs to stay in ICU to fight the severe infection. And as his windpipe was blocked, he also underwent tracheostomy, a surgical procedure that creates an opening in the neck in order to place a tube in the windpipe that allows air to the lungs. The infection in his lungs slowly subsided. But much to parents despair, the infection has spread into his eyes because of which his vision is impaired. Aiyan is now able to breathe on his own and his heart condition is also improving but he needs to stay in ICU for a few more days to recover from infection in his eyes.


“He’s been in the ICU for the past 34 days. He’s been going through a lot at such a young age, but he’s getting better. Everyday I talk to Imran about those days when Aiyan was happy and cheerful. It is those memories of our son that is giving us the strength and motivation to help him get better. The doctors told with continued treatment, Aiyan will be able to see properly once the infection goes away. But we barely have any money left to continue his treatment.” - Farzaana (mother)

Imran used to work as a helper in a cloth shop earning a meagre income of Rs 8000 per month. He knew the little income he earns won’t be enough to look after his family and so he shifted to Kuwait to earn better. ‘4 months after I’ve moved to Kuwait, I got a call from Farzaana. She was on tears crying out that Aiyan’s health is worsening. I had no other choice but to come back to India to save my son.’, says Imran.

Now, having no source of income and having exhausted all the funds aided by the government, he hasn’t been able to pay the hospital bills for the past 30 days. He can only save his son with your help.

Your help can give this helpless parents a ray of hope

“ We have been away from our home and our daughter Ifza (4) just to provide treatment for our son. We could get help from our family and friends, but the little amount they could provide wasn’t even enough for us to continue the treatment that costs Rs 8 lakhs. We have even sacrificed our meals to spend every rupee we get for our son’s treatment. Please help us save our son.” - Imran (father). 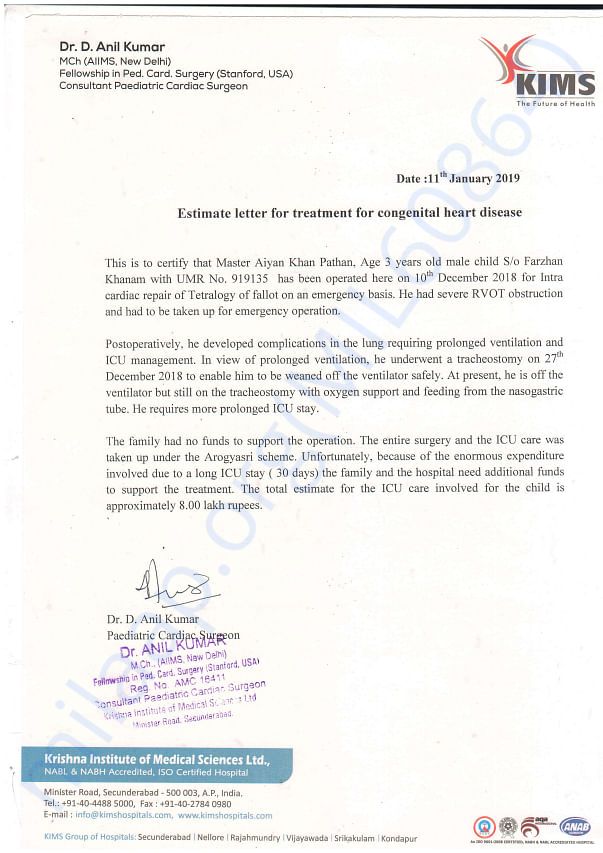 Aiyan Khan is doing well. The patient has been discharged from the hospital and is recovering. Patient is on medication and will visit hospital for regular check ups.

Scan & donate with any app
check_circle_outline Download payment receipt
Report fundraiser
Know someone in need of funds for a medical emergency? Refer to us
Rs.250,692 raised

67 Supporters expand_more
This campaign has stopped and can no longer accept donations.
$150 Million +
Raised on Milaap
Are you in need of financial support for medical or personal emergencies, or a social cause?
Start a fundraiser
Or
Know someone in need of funds for a medical emergency? Refer to us
Campaign organizer contact_mail
G
Goutham
Beneficiary: Aiyan Khan Pathan info_outline 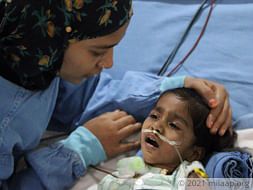