Save Life! Support our Blanket Drive

" There can be no keener revelation of a society's soul than the way in which it treats its children. Let us reach out to the children. "
- Nelson Mandela , Former President of South Africa

About 4 million children across India are homeless and lack a proper roof over their head. They either spend their nights over pavements or landfills which itself makes them vulnerable to either diseases or the authorities. This winter, in streets of Jharkhand which usually experiences 0 to 20 degree in most part of Jharkhand , we will ensure to bring warmth and comfort to more than 3000 inhabitants across major districts of Jharkhand. Ensuring a Happy Christmas from the breezy cold waves in the winter.

ADWAY WELFARE FOUNDATION BLANKET DRIVE
Blanket drive by ADWAY WELFARE FOUNDATION is first of its kind in Jharkhand which steps up to the need of the hour to protect these kids from the winter. ADWAY since its incorporation has actively participated in social awareness and  also contributed to society. Last year we conducted a similar blanket drive across Jharkhand, which was a huge success and was applauded  by all.
The drive requires rough estimation of 8 Lakh Rupees, which includes production, transporting and other expenses. We aim to distribute 3000 blankets which will cost RS. 165/- Per pc and 5 % GST on the total amount and transporting cost and other unforeseen expenses.
Children and Women on the streets will be our first priority.
DISTRICTS THAT ARE TO BE SERVED :

Why Should you contribute ?

The project will roll out in 7 districts of Jharkhand (  RANCHI, LOHARDAGA, GUMLA, SIMDEGA, PALAMU ,GARHWA, WESTSINGHBHUM ) and will benefit 3000 people. Your support will touch lives and also safeguard people from the cold waves. A small contribution from your side will protect these small childrens and women from the winter.
HOW WE WILL UTILIZE THE FUNDS?

UPI: givetomlpadwaywelfare@yesbankltd (Copy to clipboard)
Or
Click here to read the instructions before you make a bank transfer. 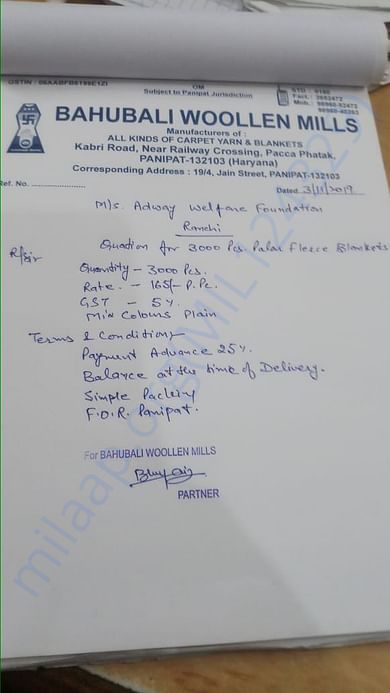 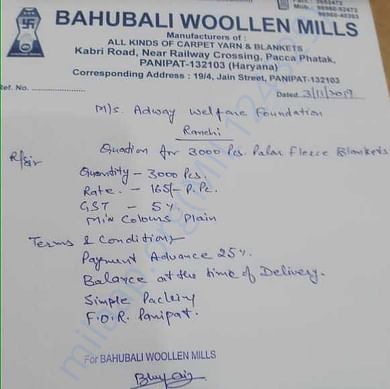 UPI: givetomlpadwaywelfare@yesbankltd (Copy to clipboard)
Or
Click here to read the instructions before you make a bank transfer.

Ask for an update
Donated to this campaign via Paytm or bank transfer? Click here if you have not received an email confirmation from Milaap.
We are going to conduct our supposed blanket drive in ranchi on 14th January. where we will be serving blankets and woolens to the needy and street people.
As we couldn't reach our goal. We will utilize these funds for same purpose in small scale.
Donate

Report fundraiser
See how thousands are crowdfunding for their causes on Milaap
Content Disclaimer: The facts and opinions, expressed in this fundraiser page are those of the campaign organiser or users, and not Milaap.
Rs.5,558 raised

Donated to this campaign via Paytm? Click here if you can’t find your donation listed below.
AR
ARYAN donated Rs.101

Donated to this campaign via Paytm? Click here if you can’t find your donation listed below.
AR
ARYAN donated Rs.101

Save Life! Support our Blanket Drive