5-Year-Old Paralyzed From The Neck Below Needs Urgent Help | Milaap
This campaign has stopped and can no longer accept donations.

5-Year-Old Paralyzed From The Neck Below Needs Urgent Help 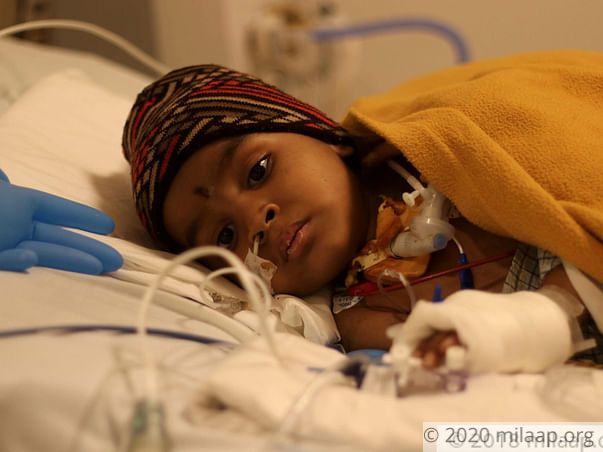 After six months of gruelling chemotherapy, Gowramma took her 5-year-old grandson home, thinking that the worst was behind them. Little Aayush was finally cancer free and could go back to the childhood he once knew before the deadly disease took over his life. However, just two months later, 5-year-old Aayush's life once again came to standstill.

“It started with his legs, he just couldn’t move them. He was terrified. He just sat on the floor crying and asking me to carry him. In the next 3 days, his entire body was paralysed and he was completely bedridden because of this dangerous disease. Now when he cries and tells me ‘Ajji wipe my tears, I can’t move my hands’ it breaks my heart. He’s so young and has been through so much already. He even fought cancer so bravely, and now he has another battle to fight.” – Gowramma, Grandmother.

Ever since he was a 1-year-old baby, Aayush has been in the care of his grandmother, Gowramma. His father Anand, a court clerk in Dharwad, Karnataka, suffers from heart disease, while his mother Sridevi suffers from mental health problems. Owing to their ill health, they had to leave him with his grandmother (Sridevi’s mother). As much as it broke their heart, they knew it was the best chance of a happy childhood they could give him.

Just when they thought his days of pain and suffering were over, he was diagnosed with another disease

Aayush was growing like every other child. He even started going to school, and as soon as he got back home, he would play his favourite songs and dance. Gowramma worked hard as a cook at a nearby hostel in their hometown, and her world revolved around her happy, cheerful grandson. Everything she did was to see him smile. Unfortunately, last year in December, Aayush fell sick. His relentless fever and cold were soon diagnosed to be blood cancer. As shattered as Gowramma was, she and her son did everything they could to get him treated.


“We spent nearly 10 lakhs on his treatment. The happiest moment was when the doctors told us that we could take him home because he was cancer free. I hoped that he would go back to the happy child he was.”

However, two months after he went home, little Aayush was diagnosed with Guillain-Barre Syndrome, a rapid-onset muscle weakness caused by the immune system damaging the peripheral nervous system. Aayush is now in the ICU on ventilator support. The only thing that can save him from this dreadful condition is continued hospital care.

An old photo of Aayush

Gowramma’s income as a cook (Rs. 4000 per month) was just enough for the family to get by. With her son’s income as a daily wager, they somehow managed to keep their family afloat and afford Aayush’s chemotherapy. But after taking several loans and spending all her savings on his cancer treatment, Gowramma has nothing left to save Aayush. As she stands by his hospital bed, she can't help but cry watching him suffer. Gowramma has done everything she could to get him treated so far, but two more weeks of treatment is beyond her means.

Little Aayush needs to stay in the ICU for at least 2 weeks to recover from this debilitating condition. He is now completely bedridden and can’t move from the neck below. At an age when he should be running around, playing and learning new things, Aayush can’t even breathe on his own. His aged grandmother is struggling to save him on her meagre income. Aayush needs your help to survive.
Estimation letter 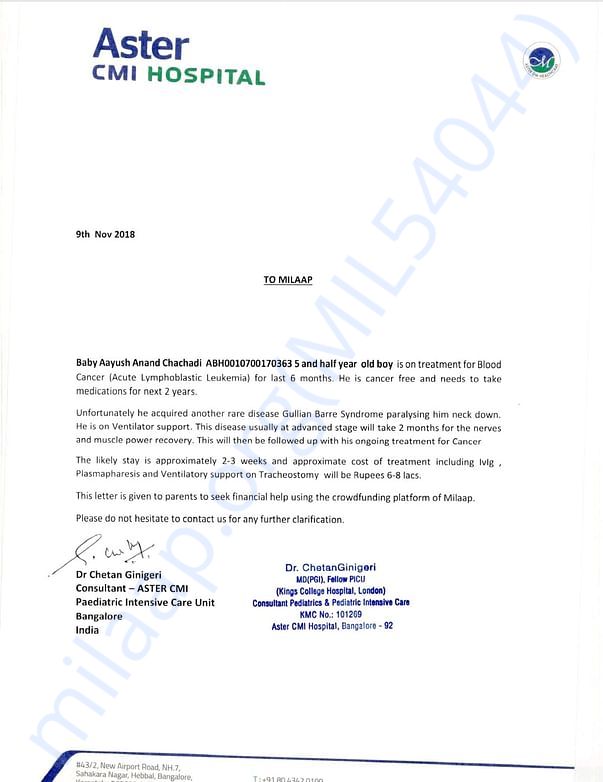 Aayush is still in the ICU. We will keep you all updated about his health.  Please keep him in your prayers.

Here's an quick update on Aayush. Aayush  is doing ok and is recovering slowly. The child still needs to stay in the hospital. Hence restarting the campaign. We shall keep you posted. 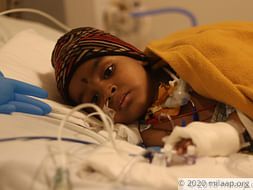 5-Year-Old Paralyzed From The Neck Below Needs Urgent Help