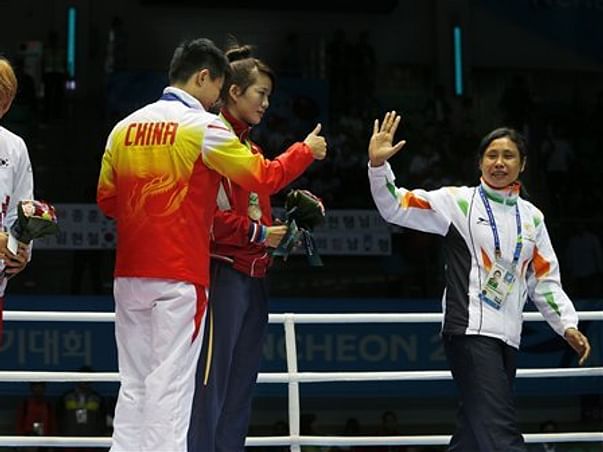 Arjuna Award winning boxer L Sarita Devi needs your support. She is facing an imminent ban for returning her bronze medal and walking off the podium at the Asian Games 2014 at Incheon Korea. She is 32 and a ban will end her career, threatening her livelihood. During her semi-final bout with the host country’s Jina Park, Sarita Devi seemed to land most of the hits (see the match footage here http://www.firstpost.com/sports/watch-judge-video-sarita-devis-semifinal-bout-jina-park-1739569.html) and yet, incredibly, was judged the loser. Shockingly, Indian sports officials at the venue did not support Sarita Devi. She ended up having to borrow money to appeal the result, which she lost. Now she faces a international ban from boxing. Sarita Devi held her head high and protested at what she believes was blatant match fixing. She was emotional, some might say foolhardy even. She did it for India and for all of us Indians, preferring to be courageous rather than stay silent and accept a medal. We need to Stand With Sarita Devi. Show her that we applaud her courage, her indomitable spirit and pride in her achievements. This is where we begin to show that we Indians care for those who represent India at the highest levels. Medal or not, Sarita Devi is a winner. Please contribute and share this campaign (#SaritaDeviFund) widely. Jai Hind.