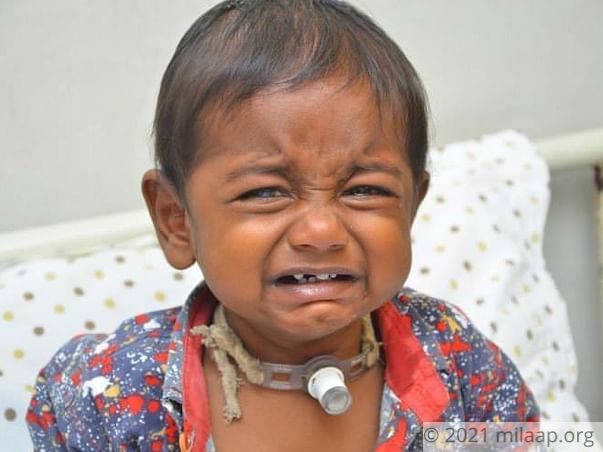 Jancy Rani and Anthonysamy were a happy couple with two children Roshan (2) and Joel (1). They did not have children for four years. When their two precious sons were born they were on cloud nine. When they were hopeful of raising their children healthy and happy, an unexpected tragedy happened. Joel has a block in his windpipe and he has been struggling to breathe.

Baby Joel was diagnosed with dengue, his windpipe is blocked

Joel was a very active and happy child until he turned 11 months. Suddenly he had a high fever and was diagnosed with dengue. Since then, his condition deteriorated, and he never got better. He struggled to breathe. His parents rushed him to a hospital in Chennai. The reports confirmed that his windpipe is blocked and told them that he needs an urgent surgery.

Even after an emergency surgery Joel's life is in danger

Within few days, Joel's health deteriorated. He needed an Emergency Tracheostomy and he is now breathing through the tracheostomy tubes. He cannot survive like this for a long time, he requires tracheostomy closure reconstructive surgery to live a normal life.


"I never thought that my son's life will be at risk. It is so painful to see the tubes around him. He just turned one, already a surgery is done and he needs one more surgery. How much can this little body bear? I'm so worried. I can't imagine losing my son." - Jancy Rai

Jancy and Anthony are from Villupuram and have come to Chennai for the treatment. They are struggling all alone with 2 little children. Joel is supposed to be at the hospital until next surgery. Unfortunately, they cannot afford to pay the hospital expenses so they have taken him back home with a heavy heart. They are frustrated and do not know whom to plead for help.

Joel has recovered from breathing trouble and fever. His health is better now but without the closure surgery it may turn out fatal soon. Anyone would fall for his smile, he has been very strong despite the suffering. His parents are desperate to save him. They are running to everyone they know to arrange money for his life-saving surgery.


"I felt I'm the worst father in this world when I had to take my son back home knowing his condition. He was still holding onto me. He trusts me. I can't let him go but how can I manage to get so much of money? I have no strength to even look at him. I'm willing to do anything to save him. I cannot forgive myself if I lose him." - Anthonysamy.

Anthony is a daily wage worker, sole breadwinner of the family

Anthony is a daily wage worker. He doesn't get a job all the days in a month. Ever since the diagnosis, he is struggling to get a job. He is working day and night and saving every rupee he gets. He even skips his meals. He is physically and emotionally exhausted. Now he is relying completely on the generosity of the strangers to save his son.

Anythonysamy earns Rs 300 per day. He supports his family of four with the meager income. He has nothing to sell. He has borrowed heavily from his friends and he is neck deep in debts. He is desperate to save his son. Joel has a high probability of recovery if he has the surgery at the right time. He needs Rs 3 lakhs for the surgery.

Your contribution can save little Joel's life.