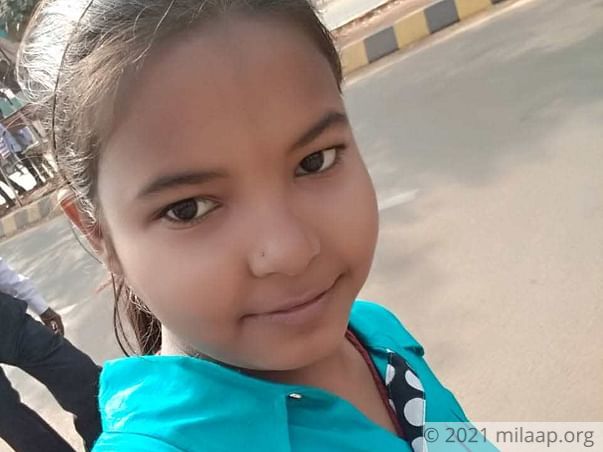 Share
Sohini sometimes looks at her father’s photo hanging from the wall and feels that things would have been different if he was around. Sohini’s father, Ramapada, passed away last September because of a severe liver disease that had gone overlooked for a long while. His death has left the entire family in disarray. Sohini (12) and Shreyasi (17) are too young to work and their mother, Arpita had hardly known a life outside home. Amidst all of this, Sohini was diagnosed with cancer last December. Her only hope to get better is to undergo chemotherapy but her poor mother has no means to afford that.

‘Her face was completely swollen when she woke up'

Everything was normal on the night before the fateful morning when Sohini woke up with a swollen face. ‘Is that an allergic reaction, is that because of some insect bite’ - Arpita had no clue that this was the first symptom of her daughter’s cancer.

“We took her to a dermatologist but he told that this swelling is different. He referred us to a hospital in Bhubaneshwar. There I learned that my daughter has Hodgkin's Lymphoma, cancer has affected her immune system. It felt like God was testing me." - Arpita (mother)

‘My husband has left us nothing, my in-laws have deserted us - my parents are my only hope’

Ramapada was the sole breadwinner. His symptoms went unnoticed, and it was a shock when he died. Arpita's in-laws abandoned her after their son's death, and refuse to help with Sohini's treatment. Without any savings on hand, she sold mother’s jewellery and mortgaged her father’s house to start Sohini’s treatment.

Sohini with her sister, Shreyasi and her mother

“My old father and my brother are toiling everyday to make some arrangements for Sohini. We somehow arranged for Rs 1 lakh but we need Rs 6 lakhs more. How will I arrange for so much?”

‘Her cancer is spreading rapidly, she can’t miss a single cycle of chemo - please help me’

Sohini doesn’t know she has cancer. Arpita feels that knowing the truth will break her. She just thinks there is a lump in her lungs and it will go away with treatment.

“She hopes to go back to school soon. She misses playing in the evening. I keep telling her that she will be fine but in my mind I am afraid that I might have to stop her treatment if I fail to arrange the money soon.”

A generous contribution from your side can bring the smile on little Sohini’s face.

Donate
0%
Be the first one to donate
Need Rs.600,000
Card, Netbanking, Cheque pickups
Or Donate using