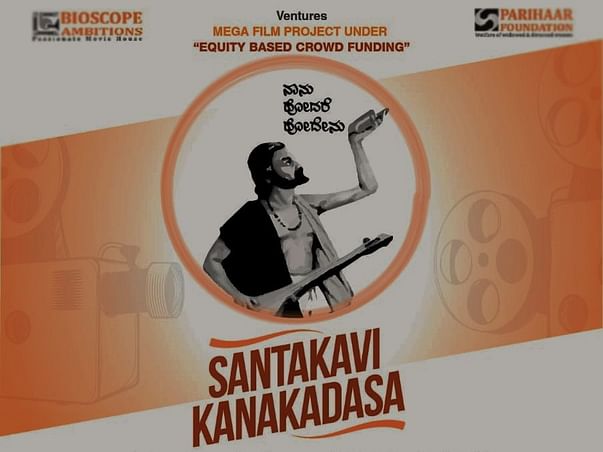 Back ground
Saint Kanakadasa of purba (Dhangar) community is a legendary saint and an exemplary poet. His legend has sailed past 500 years and it is the duty of every cultural activist to preserve, persuade and pass on heritage for the generations to come in different forms from time and again in various forms of media for the legends to live, for we live ,only thus far as we take our culture and heritage. In the age of Digital Marketing, the only respectable way to record the life in a palpable and dignified manner is the film media.
In an era where there are 6000 tweets shared every second, we hardly a few hundred tweets in kanaka’s name. Facebook and other media also do not have much content. The valid way of presenting his life would be to reshoot and represent his life story in a modern scenario with meticulously re-written dialogues and fresh mellifluous music that send Kanak’s lyrics directly to the hearts and minds of various communities and congregations of people.
This project attempts just to do that. The commercial viability of the project is greatly appreciable. While also, the cultural and historical value of this representation will boost the morale and uplifts the spirits of the people of Karnataka, and the Kannada speaking clan that lives far across the seas.
Although there are many historical characters which we have listed for special screening, Kanaka comes first to our mind, following his 530th Jayanthi. This project is a founding stone for many artists to come forth and depict, capture and present the lives and history of Kannadiga’s to the world, which comes flocking to Karnataka for success in various professions.
The film may be used to:
Each of the above mentioned activity is estimated to create 300 new jobs among youth. Amounting to a total of 1500 jobs including the increase in the productivity of musicians and various other stage shows that will live with the new music. This unique initiative will spin off and set an example of promoting Films with a socially responsible message.
Further to the success of this toy making initiative, more and more Indian made character toys can evolve, helping the Indian toy industry and reviving the age old Channapatna artisans to rethink, their toy making strategy for a profitable, sustainable and proud display of Karnataka’s talent’s and treasures.
Although there were 23 books released after 500 years of Kanaka’s Samadhi, they have not made a huge sales or profound impact for the Kannadiga community to take pride in its heritage. This project is aimed at filling the gap between, the books and today’s ultra – fast digital and social media generation that takes its cultures and values to the next level.
Objectives
. Create a digital presence of Santakavi kanakadasa
. Boost the morale and uphold the culture and respect of Kannadiga’s world-wide
. Restore Kannada Historians and poets
. Create new jobs
. Popularize the works of Kanakadasa through fresh music
. Make the Kannadiga community noticeable to the world
Research
. 23 books on kanakadasa to be released on July 3 – The- Hindu.
. Kanakadasa Research Centre Mangalore University
. Kanakadasa Adhyayana peeta and Kanakadasa Research centre

Donate
0%
Be the first one to donate
Need Rs.10,000,000
Card, Netbanking, Cheque pickups
Or Donate using