This 1-year-old Who Had A 1 Kilo Tumor Needs Help To Survive | Milaap
This is a supporting campaign. Contributions made to this campaign will go towards the main campaign.
Milaap will not charge any fee on your donation to this campaign. 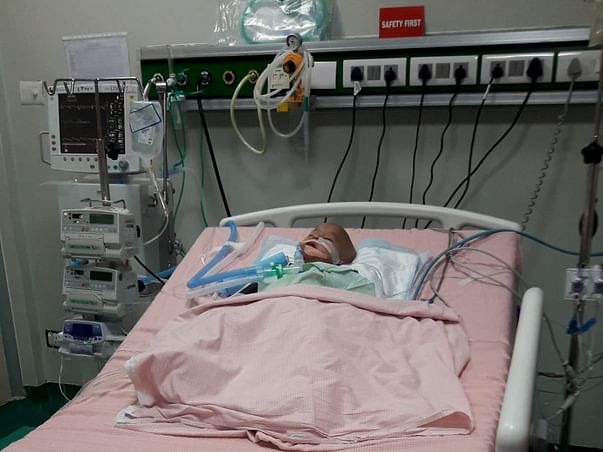 “In the past 8 months, I think we’ve cried so much that we’re out of tears now. She (Siddhi) is just a year old and she is so strong. She has been through 6 operations and 10 cycles of chemo and still smiles and play. If she is fighting so hard then why should we give up?” – Navin Ray, Siddhi’s father

In the past 9 months, 1-year-old Siddhi was diagnosed with a large tumor inside her liver and had just 20% chances of survival. The baby has fought valiantly like a warrior and until now, she has undergone 6 operations and 10 cycles of chemotherapy. Now, she has hopes of complete recovery only if she receives 4 additional cycles of chemotherapy but her father, Navin, who has exhausted all he had to help keep her alive until now, is finding it difficult to provide for the treatments.

Siddhi was diagnosed with a very rare cancerous tumor

Hailing from a small town in Chhattisgarh, in December 2016, Navin and his wife, Akanksha had twins – Riddhi and Siddhi. everything seemed normal for the first 6 months after the birth of the twins’. Suddenly, Siddhi’s upper-right side of her abdomen started swelling up.

Navin decided to get his daughter checked up and after several tests and scans, it was still unclear what was wrong with her.

After going to Vellore and waiting for multiple hours to get his daughter checked, Navin and Akanksha’s souls were completely destroyed when they learned that Siddhi had hepatoblastoma, a very rare and life-threatening cancerous tumor which was growing rapidly inside the 1-year-old’s liver.

Fewer than one in a million children are diagnosed with hepatoblastoma, that’s how rare it is. By July, Siddhi wasn’t able to gain much weight and had grown weak.

Siddhi had only 20% chances of survival

“The doctor said that if we decided to treat her, she’d have only 20% chances of getting out of this. My wife and I were so crushed. I don’t think we have smiled ever since. My wife has cried her heart out and she cries so much that the doctors have told us not to cry excessively as well.” – Navin

Akanksha and Siddhi at the hospital

Navin and his wife decided to fight and get Siddhi the treatment she deserved.

By August 2017, the 1-year-old was extremely critical and underweight. She had to undergo chemotherapy immediately but there was a waiting period of 25 days in the hospital at Vellore.

“She was so critical. Her abdomen had swollen up a lot and she was very thin. I decided to take her to a hospital in Hyderabad and get her chemotherapy started.” – Navin

Finally, the 1-year-old started chemotherapy and after 6 intense cycles, Navin was advised to go to a doctor in Ahmedabad.

“The doctor said to get 4 additional cycles done and then he’d do a liver surgery and then she’ll be fine. That’s what any parent would love to hear. So, we went back to Hyderabad and got 4 more cycles done and went back to Ahmedabad. On seeing the reports, the doctor refused to do the surgery and told us to go to Mumbai. Then we went to Mumbai with our hopes up but no hospital was ready to take her case. Finally, someone in Mumbai told us to come to Chennai. This has been so stressful and painful, words cannot describe it.” – Navin

So, 1-year-old Siddhi and her parents have been away from home since 14th August 2017. They have been to 5 different cities to keep Siddhi alive. This has been nothing but a hard battle and the 1-year-old and her family haven’t given up yet.

1-year-old Siddhi is a strong warrior

After traveling to 5 different cities in desperate need of treatment, 1-year-old Siddhi is nothing but a warrior. Until now, not only has she undergone 10 brutal cycles of chemotherapy but in addition to 5 other operations, in Chennai, she underwent a 9-hour long hepatectomy surgery as well.

“They removed 70% of her liver and the tumor too. The tumor weighed over 1 kg! This was a major surgery and she can survive on the 30% of the liver she has left. Now, she has a 100% chance of recovery and this is really a miracle. But she needs more chemotherapy now.” – Navin

1-year-old Siddhi’s only hope of complete recovery lies in getting 4 additional cycles of chemotherapy. Navin has spent so much on Siddhi’s multiple visits, operations and chemotherapy. He is left with nothing to save his daughter.

“Right now, she weighs just 5 kgs whereas Riddhi weighs around 10 kgs. She is so strong. Chemo has the capacity to weaken and destroy someone. She is just a year-old ad she is stronger than most of us. She has withstood 10 cycles and 6 operations but still manages to smile and play with me. I want to fight too. I will fight until my very last breath.” – Navin

Navin is in dire need of help

Until now, Navin has provided over 24 lakhs behind Siddhi’s surgeries and treatments. He has asked everyone he could and exhausted every bit of savings he and his wife had managed to accumulate. He worked as a supervisor of laborers and earned a meager salary every month. Still, he managed to make ends meet and make the most of his resources to save his daughter.

Now, Siddhi needs chemotherapy for 6 months and that cost is estimated to be around Rs. 5 lakhs. Navin has nothing left to save his daughter and needs your help.

1-year-old Siddhi has been through 10 chemo cycles and a major liver operation. She beat the odds of survival and now, to recover completely, she needs 4 cycles of chemotherapy. Her father has spent everything he had on her and has nothing left to save her. He needs your help.

Your support will save 1-year-old Siddhi. 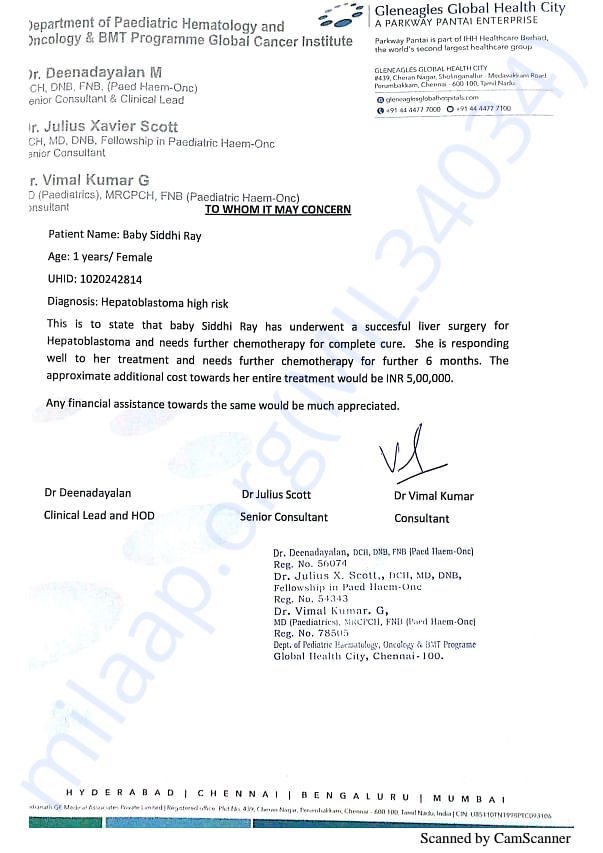 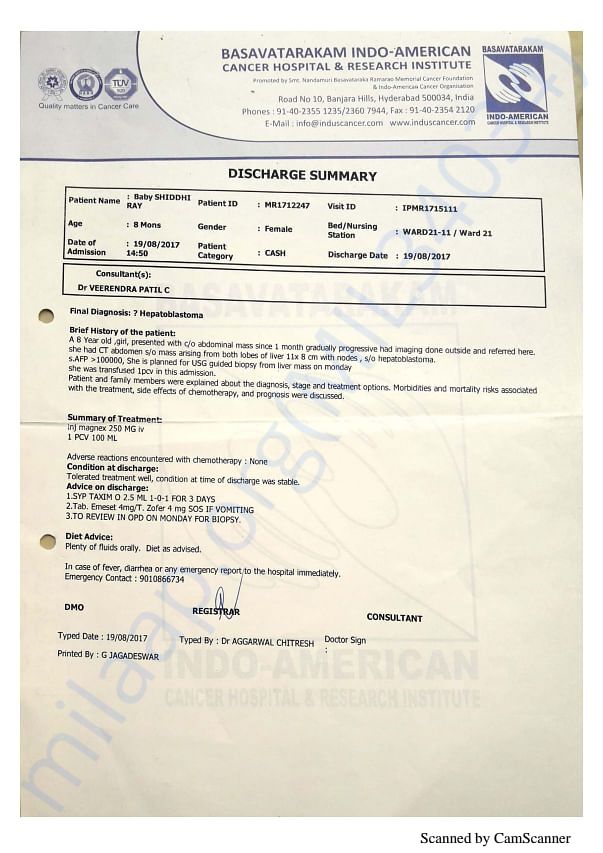 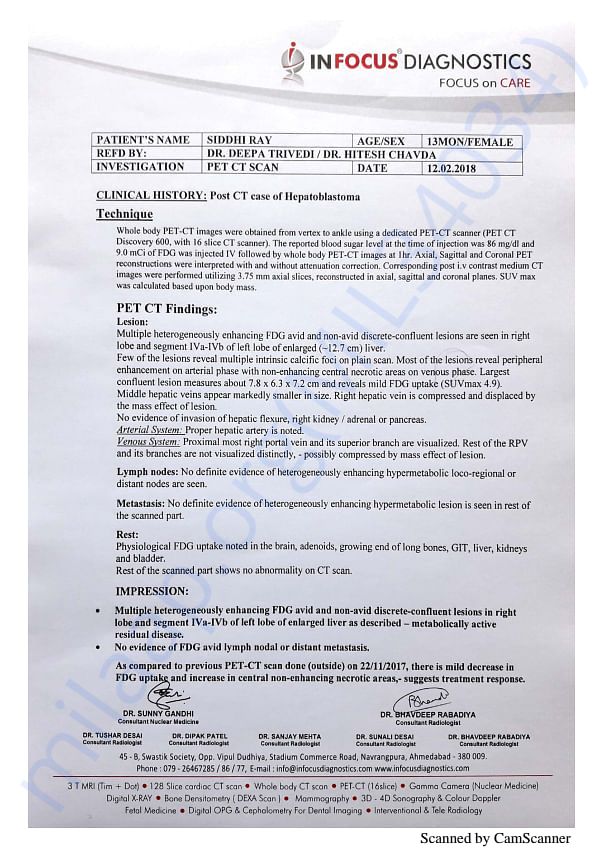 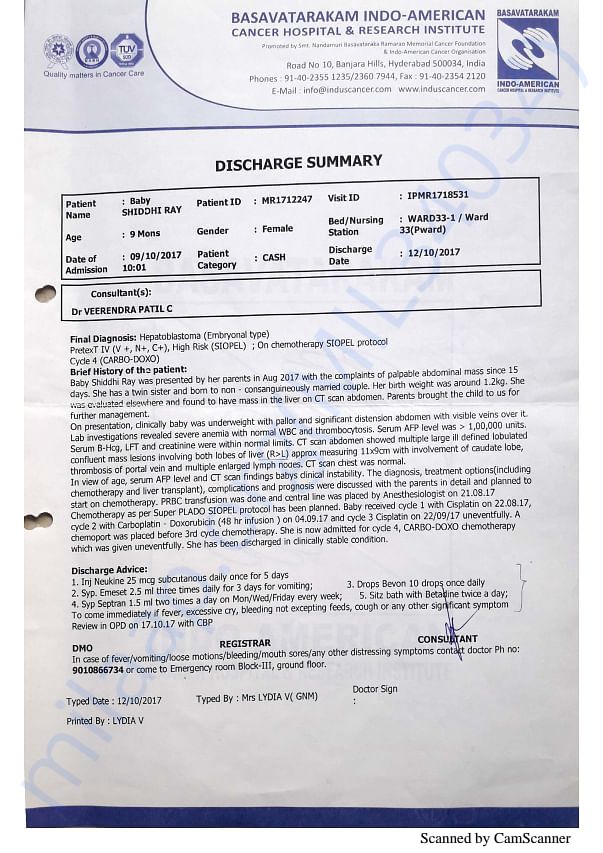 Second chimo report with all details 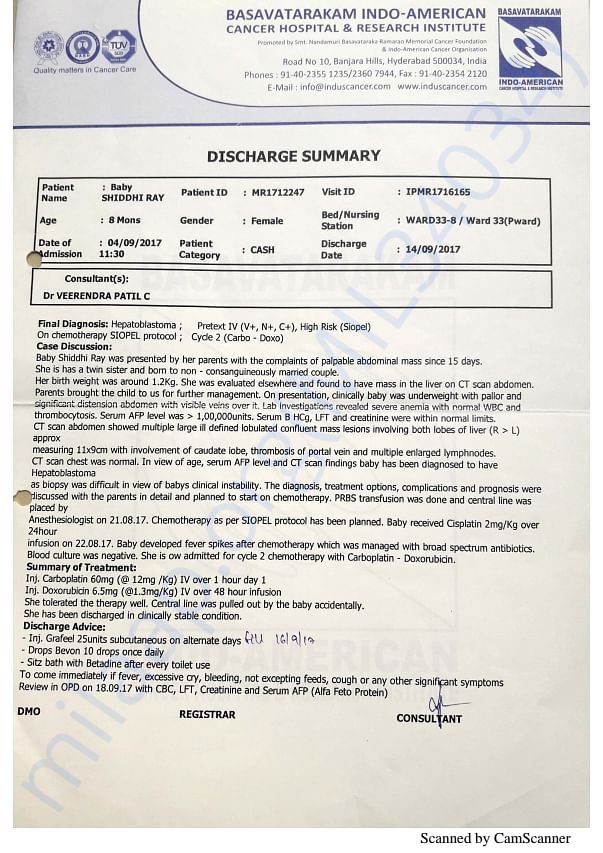 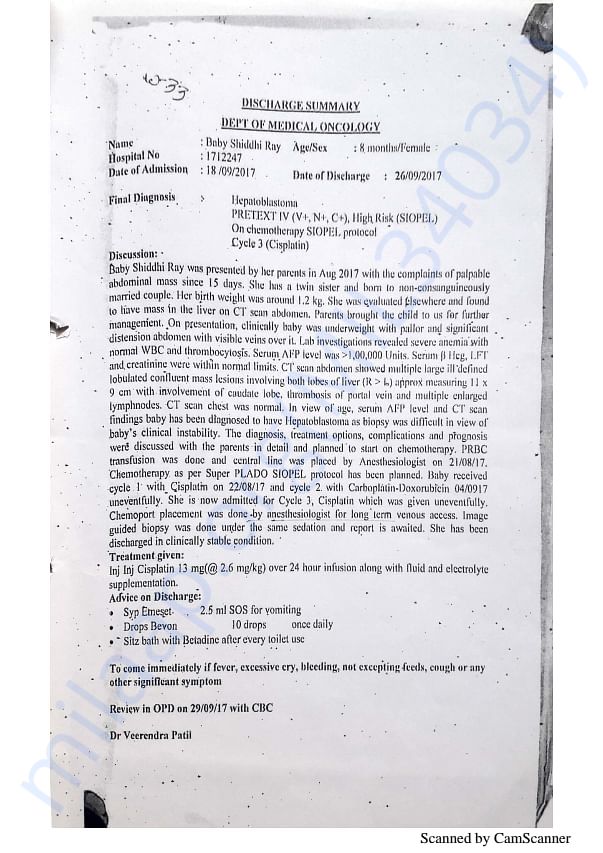 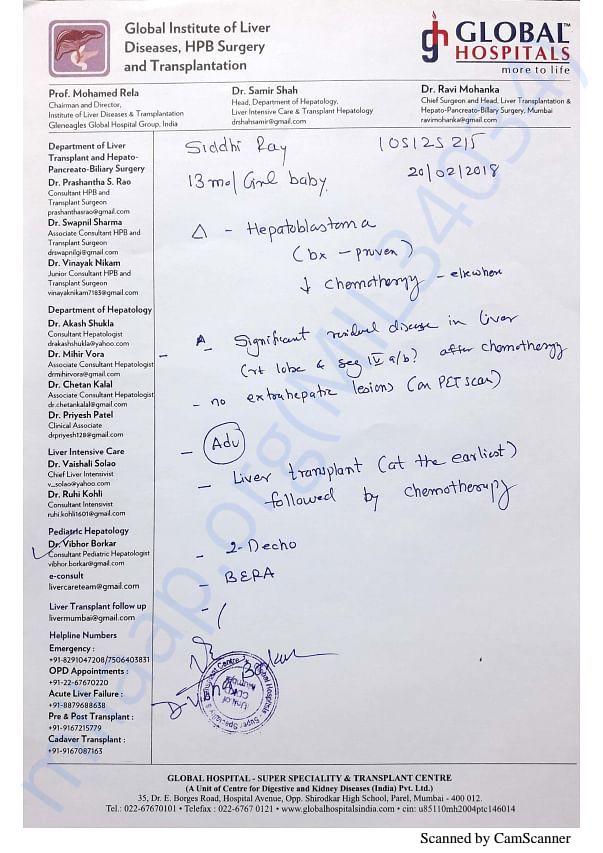 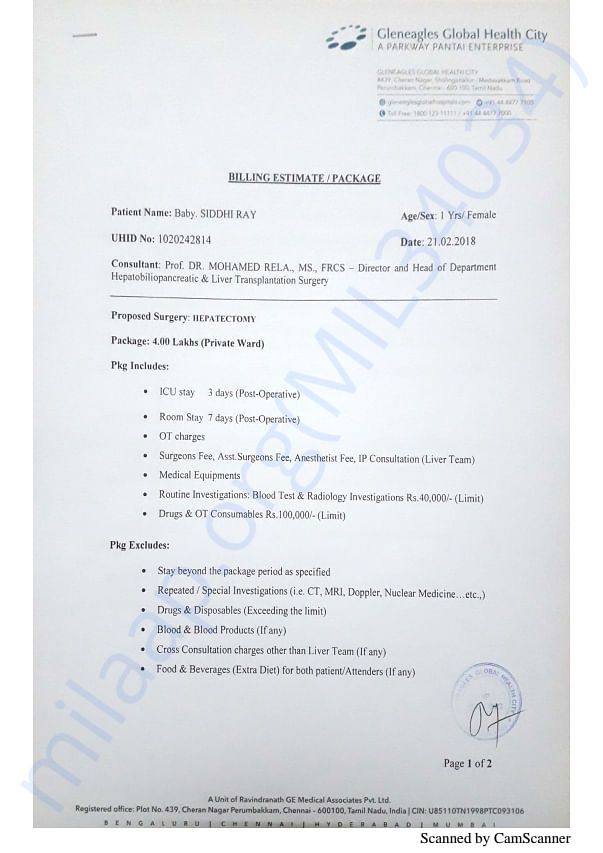 Doctor's letter for all bill and details 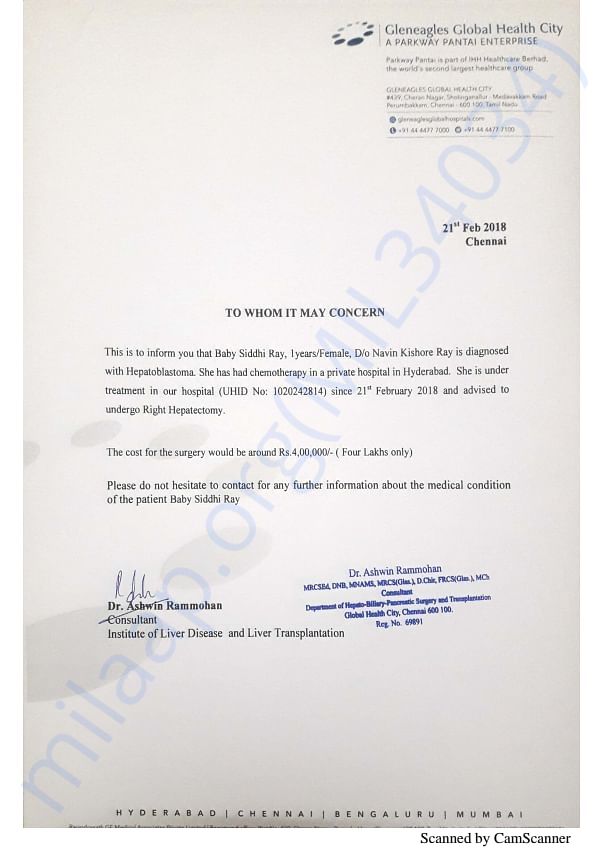 We are very thankful to all of you, from your contributions, prayers and blessing, Siddhi’s surgery is done successfully and now she is recovering.

Thanks to you all from our family and lots of blessings.

Love from Riddhi and Siddhi

Thanks donors for your contribution and blessings.
Siddhi's surgery is done successfully. She is now in the ICU and doing well. Need your prayers for her fast recovery, and also share the link as much as you can.

Thankyou from our family
Specially from riddhi's twin sister.
Donate 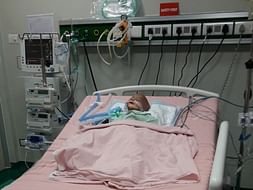