Save the Strays | Milaap 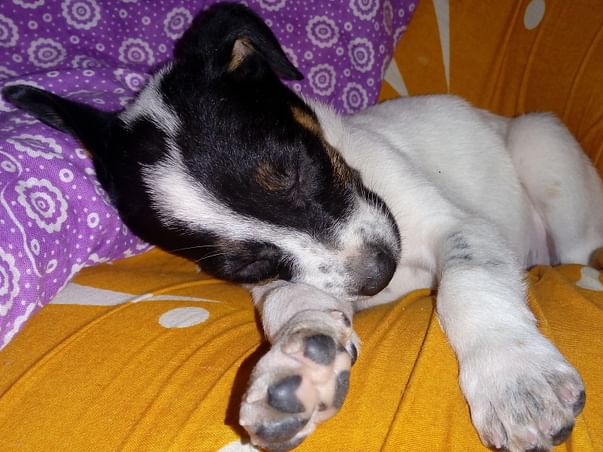 It was 3 years back I got my first child Pushy(the cat, who unfortunately left us few weeks ago). And a year after that my second child Muffin (the first dog, who was rescued by Alexandra Gade and Charlene Hendricks ). Muffin went through a lot of tough times with parvo, internal bleeding etc., but emerged stronger from that. During this time I was a hard-core non-vegeterian.
Then in 2017, September I got Dholu, again rescued from the streets by Sandra. Who we all tried to get adopted but did not work out. I took Dholu to a friend's place who was keen on adopting but due to family pressure he could not keep his word, so I had to take him back, but I could not find the strength in my heart to drop him off the streets, (by the way he was so tiny,that he fit into my hands) so I decided to take him home and deal with my Dad later (who is also not so excited about the dog thing, but he is coming around). So I took Dholu with me and my Mom fell in love with him. And so his happily ever after began.
And then during December 2017 this stray from my locality started hanging around my garden, she is a very sweet little girl, I named her Idli. Then I discovered she was pregnant, so my mom somehow built a small loose kennel for her with the bricks lying around, an old mosquito net, in our garden.And she started living there happily. Soon the day arrived and she gave birth to the most beautiful babies, Hachiko, Scooby and Laika. It was happiness all around. The kids slowly started growing up, playing happily in the garden.
Then on January 2018, my neighbour rescued a one month old pup from getting bit by some roudy dogs. He kept her inside his home, but she used to scream all day long, and tried to run away from that home and tried entering our premises, and while doing so she used to get chased around by the locality dogs. Then one fine day she entered my house covered in fleas, so I gave her a bath and fed her nicely and tried to get her back in their home. But the neighbours were saying "keep her, we won't be able to keep her for long".
And that was that, and now she is my Pastry, the lady don of the house ❤

Then during March I lost my Hachi and Laika to some disease that the doctors could not cure.
By this time I was slowly inclining towards vegeterianism.
After that I started treating dogs in my locality and on my way to office for maggots, deworming them, feeding them, treating them for ticks anything and everything that am able to do.
About two months back, on my way to the office I started noticing this really malnutritioned chap covered in dirt. I felt sorry but as I already have so many strays I did not pick her. July came and it was raining heavily all around Cal. So one day while returning from office I saw that girl lying in a medicine shop and what I thought was dirt, it was actually stone chips. I asked the shopkeeper where does she stay at night, he said on the road since he closes the shop at night, her only place is the road. I did not think anymore I picked her up with one hand and holding the umbrella and my heavy purse on the other hand and shoulder. And I kept her in the balcony for three nights, for most of which she was sleeping. Then I gave her a warm bath and took her inside and my Mom slowly got all the chips off her. I named her Ghotu and she is the most well behaved of the lot.
Then I arranged for neutering for all my babies who are eligible and most of my neighbourhood dogs as well. And by this time I was a eggetarian, who refrained from using products tested on animals, using milk, honey, leather, fur etc. And with the vision of becoming a vegan and inspiring everyone around me to become one as well.
Then in August first week I heard about Pari, another beautiful work of Sandra and her friend. Pari's back limbs are paralysed. Sandra rescued her when she was about to die and gave her a new life. But she already has 11 special needs child at her home so she was looking for someone to foster for Pari until she gets adopted overseas by a nice family. So many people were approached, some even gave her hope but none were fruitful. So I decided to take Pari in. She came last Monday, it took a little while for her to adjust in the new home and so many dogs. She got into a fight with Pastry and bit my mom when she tried to intervene (totally unintentional). And then she apologised to mom for that by so many sweet gestures I cannot even explain. And it has been a week and she is happily enjoying herself in her new home, playing around but most importantly she does not leave my mom's side for once, not even when she goes to the loo. ❤

Finally I rescued Titli from the street, one month old orphan girl, whom I used to feed on my way to office. Took her in last Friday. Gave her a bath, and now much like her name which means butterfly, she is jumping all around the house. And a kind friend Mukta decided to sponsor her food and vaccines. Thank you Mukta ❤

There is one more guy who hangs around in my garden, Kalu, who is a little injured. Sleeps in the balcony or the terrace. He somehow just found my address and decided not to leave me ever ❤

I have been thinking about building some kennels in my garden for a while now. There are 10 more dogs that I know of who are in dire need of a home, so I decided to start the work now. So I started drawing the plan of building 4 pax shelter then increased the number to 10 pax shelter. It is a very expensive project for me, as I belong from a very middle class back ground and an average earner and all my money goes for my babies all around Kolkata, which is still not enough to get the proper vaccines done for all of them. Now I have built 5 kennels and want to convery my first floor into a full fledged shelter home and rescue  all the babies in Kolkata that I can. Need all kinds of help for this. Anyone wants to come forwarx for this project, I will be grateful.

UPI: givetophalder@yesbankltd (Copy to clipboard)
Or
Click here to read the instructions before you make a bank transfer.

Ask for an update
Donated to this campaign via Paytm or bank transfer? Click here if you have not received an email confirmation from Milaap.
Two more kids are going to get added. And still am unable to arrange for the required funds for the first floor conversion of the shelter. Their food and ailments are consuming it all. Need help urgently.
Dear Supporters,

Now I got Rani, sweet little, 6 months old girl who has a nerve problem, due to which she is always twitching and she is a Distemper and Parvo survivor. She was abondoned twice, was threatened on being poisoned by neighbours and then finally she came to.
Am looking for a nice forever family for her, who would love her unconditionally. Due to her condition and tauma she is always scared and trusts human around her like anything, that is her solace.

Thank you for your love.The kennels are already built midway. And it will take another 4 weeks to be completely ready. Medicines purchased worth Rs.20000

We shall keep you posted.

You are sending a message to
Pragati Halder
Go back 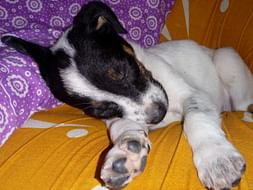