24-year-old Roland's life can be saved with a kidney transplant | Milaap
Milaap will not charge any fee on your donation to this campaign. 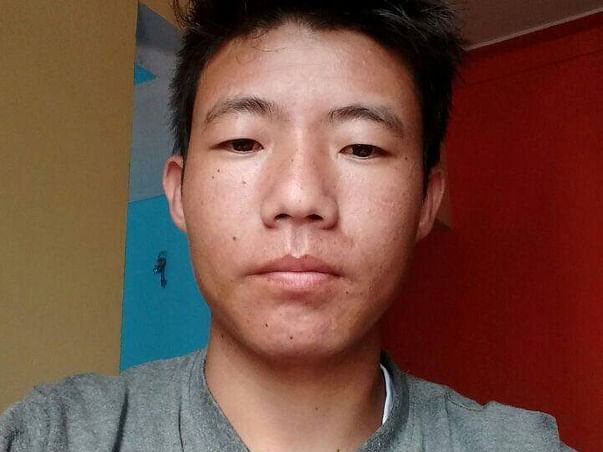 Roland Lepcha is from a remote village called Samthar in Darjeeling. He was born into a simple farming family working hard to make ends meet. At the tender age of 9, he lost his mother & his father could not support Roland’s education with his income. Intrinsically, this led Roland to discontinue his studies.
In the year 2014, he moved to Bangalore to make a living and support his family. He started working as a cook in small restaurant(s) earning a meagre income of Rs. 2500 /- per month (approx. $37). With his hard work and a couple of job changes later, he started to make Rs. 9500 /- per month (approx. $140) by early 2016. With this earning, he was taking care of his ailing father who still lives in his village.
Life had just begun to pick itself up for this hard working young man but for his twisted fate which had other sinister plans.
Early 2016, he started experiencing intermittent bouts of headache and fever. Attributing and believing that it was his hectic schedule as a restaurant cook, he started looking for other job options. So, he joined a course hoping to land a job in a hair salon. And, he had only started the course, when his health started to deteriorate further with the same symptoms of headache, fever and blood pressure fluctuations.
The worst was yet to come.
The thorough check-up diagnosed him to have "Chronic Kidney Disease Stage 5". This meant that his kidneys had lost nearly all their ability to do their job effectively. He is currently on maintenance hemodialysis twice weekly. He is advised renal (kidney) transplant therapy in the form of renal transplant as a life saving measure and is advised to continue regular hemodialysis as a life saving treatment until renal (kidney) transplantation.
The haemodialysis costs Rs. 30000 /- per month (approx. $441) and the kidney transplant procedure would cost Rs. 5 – 7 Lakh (approx. $7353 - $10295). This expense is way beyond his means and support.
After doing our bit of help and when we were sure we would need a larger audience to meet the medical expense, we decided to write this fundraiser as a public plead of hope believing in the fundamental thought that “Hope springs eternal”.
We are currently looking to cover the cost of dialysis for a year and hope to find a donor by then.
“Ashes to Ashes and Dust to Dust”- we bring nothing and take nothing. All that remains after we have gone is the touch of “Godliness” we leave onto others” - Anonymous
Thank you & May the Good Protector bless you all.…! 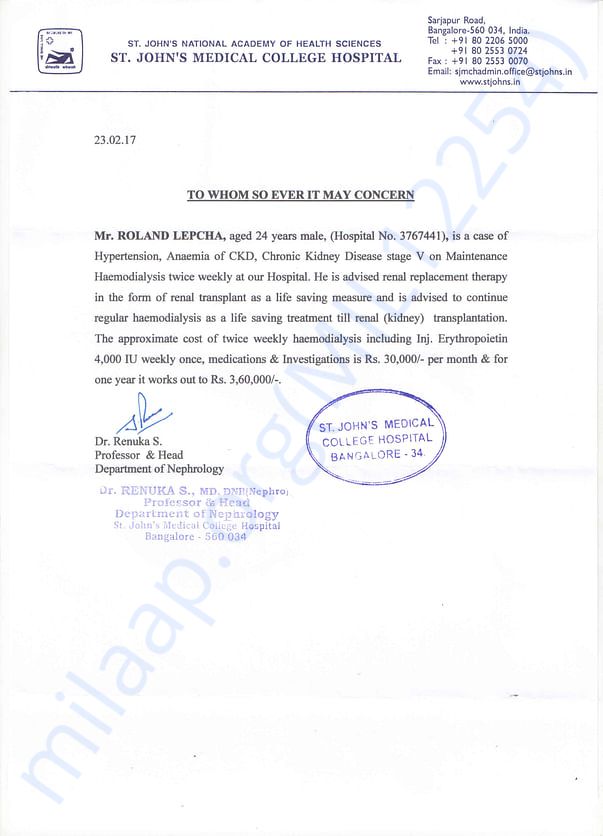 Ask for an update
Donated to this campaign via Paytm or bank transfer? Click here if you have not received an email confirmation from Milaap.
Hello Everyone,

Roland's operation is scheduled for today at 9 am IST.

Please do pray for him.

Thank you,
Alvin.
Hello Everyone,

All the tests, medical & legal processes for the transplant is finally over. It has been a very difficult year for Roland to go through all these processes while continuing Hemodialysis. However, this has been possible for him only because of your support and prayers. Thank you so much for the generous contributions that you've made.

Roland's has been admitted to the hospital today. The transplant will most likely happen coming tuesday. The dates are not yet finalised.

After the operation, there will be a long recovery process if his body doesn't reject the new kidney. Please do pray for him.

Scan & donate with any app
check_circle_outline Download payment receipt
Report fundraiser
Know someone in need of funds for a medical emergency? Refer to us
Rs.117,382 raised

Donated to this campaign via Bank transfer/QR Code? Click here if you can’t find your donation listed below.
K
Kaushik donated Rs.1,000

All the best Roland....life is just a game play it well!!

Hope you get well soon!

Donated to this campaign via Bank transfer/QR Code? Click here if you can’t find your donation listed below.
K
Kaushik donated Rs.1,000

All the best Roland....life is just a game play it well!!

Hope you get well soon!

You are sending a message to
Alvin Martin
Go back 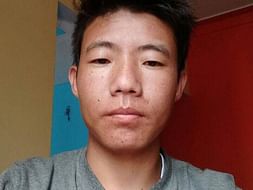