5-Year-Old With Football-sized Belly Cannot Survive Another Day | Milaap
This is a supporting campaign. Contributions made to this campaign will go towards the main campaign.
Milaap will not charge any fee on your donation to this campaign. 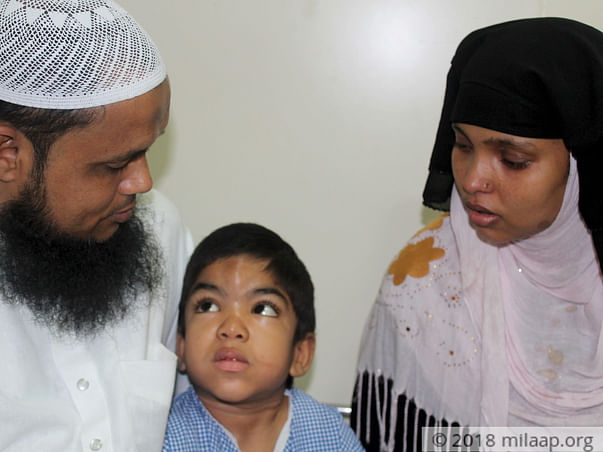 “Hanzala does not behave like a normal 5-year-old. He whimpers like a baby and points to his tummy to tell us that it hurts. Sometimes we cannot understand anything that he babbles, and he starts crying because he cannot even communicate with us properly. Every day we wake up with the fear of losing him.”-Rahat Anjum, father.

After his persistent stomach ache, the next most painful thing for Hanzala is wearing his t-shirt after bath every day as his arms can only be raised up till his ear. If his mother, Saleekha Begum, lifts them a little higher up, he screams in pain. He cannot walk properly either, as his spine has been bending since birth. Living is a nightmare for Hanzala at this moment, but death is sure to come for him if he does not get a bone marrow transplant soon. His father, a poor madrassa teacher, is struggling to save him before it is too late.

The couple’s first-born son, Huzaifa (6), had suffered severe infections at birth which resulted in him being deaf and dumb. So when Hanzala was born seemingly healthy a year after, they were overjoyed and prayed for him to grow up like a normal child. However, within a month of his birth, Baby Huzaifa fell terribly sick too, making these parents extremely worried.

“One day, we noticed that his body had become yellow all over. We were shocked because he had been okay just the day before. We rushed him to a hospital in our hometown in Bihar, where doctors said that it had to do with a liver problem. He was given medicines and even though the yellowness went away his tummy started swelling. We noticed that his growth was also not normal from that point onwards. We took him to many doctors, but none of them had any answer.”-Rahat Anjum.

Rahat Anjum and Saleekha sold everything they had in Bihar and left for Bangalore in the hope that they would be able to understand why their son’s stomach swelling had not gone away even after a hernia surgery. He had also not meeting major developmental milestones even after he turned 4 – he could only say ‘Ammi’, but that too not very clearly. His limbs looked shorter than normal too, but nobody could ascertain the cause for these issues for long. He was finally diagnosed with mucopolysaccharidosis, a condition where the body cannot break down important sugars, resulting in declined physical and mental function along with impaired organ functioning that can result in death.


“The doctors have told us that only a bone marrow transplant can save him, otherwise he will have a painfully short life. He is 5-years-old, but cannot do anything on his own. When he tries to eat rice and dal on his own, the food slips through his hand due to the stiffness of his fingers. It is heartbreaking to watch him being unable to do the most basic activities by himself. But what really scares us is the fact that he can get scarier symptoms in the future and even die.”-Rahat Anjum.

Saleekha has nightmares of losing her son, she cannot hold back her tears now

“Hanzala cries more often now – my wife does not leave his side even for a minute and cries uncontrollably when she sees him struggling to walk or eat. She strongly thinks it is because of some sin she did that her child is suffering. I have no words to console her as I am dying inside as well, but I try to put up a strong front .”-Rahat Anjum.

Hanzala’s condition is critical than ever, but Rahat cannot afford his life-saving transplant

It has been a year since Rahat and Saleekha have been living with their three children – Huzaifa (6), Hanzala (5) and Ribda (3) in a small spare room of a Bangalore madrassa where Rahat works as a teacher. He earns Rs 8000 a month, but it is not enough to afford Hanzala’s daily medicines and hospital admission charges, let alone his bone marrow transplant. As all of his salary goes into his son’s treatment, he has not been able to send his eldest child to a special school as he is deaf and dumb. Now, Hanzala’s condition has become so bad that he might not live another day without an urgent transplant.

“Only Allah can show us a way now - we have tried asking everybody back home for help, but nobody is willing to loan us such a huge amount of money. My innocent son does not deserve to die just because of his parents' poverty. Please help us.”-Rahat Anjum, with tears in his eyes.

5-year-old Hanzala has a deadly disease that has resulted in stunted physical and mental growth. He cannot speak normally and communicate his pain to his parents. His life will be short and painful without an urgent bone marrow transplant, but his poor parents cannot afford to save him. 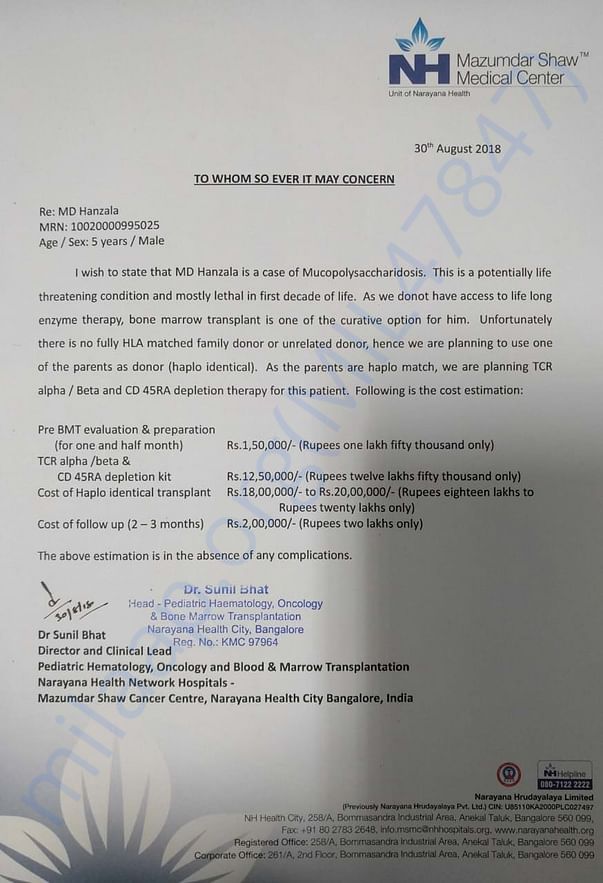 Currently, Hanzala is at home. Doctors are planning for Bone Marrow Transplant as soon as possible, depending on the availability of funds.

Date of the transplant is still not yet decided for Hanzala. Please keep supporting us as we are in need of more funds and keep him in your prayers.

Please share this campaign with your friends and family.

This is to inform you all that Hanzala requires more funds to go ahead with the bone marrow transplant. The treatment has not started as we still require funds. He is currently at home and his health is very weak.

Scan & donate with any app
check_circle_outline Download payment receipt
Report fundraiser
Know someone in need of funds for a medical emergency? Refer to us
Rs.50,000 raised

You are sending a message to
Shiny Charles
Go back 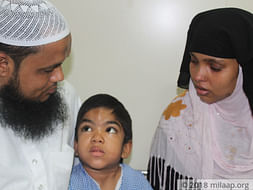