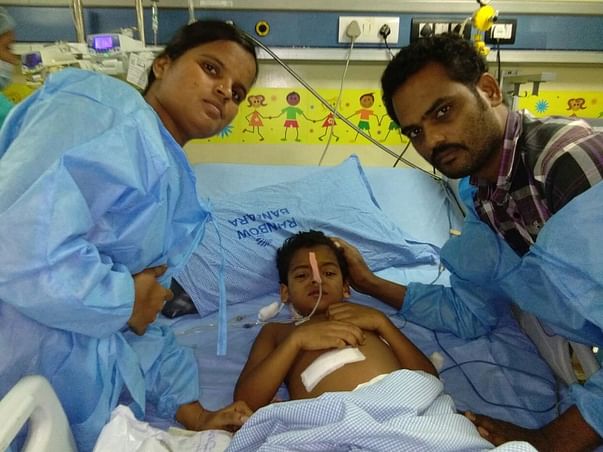 What is Gastrointestinal Bleeding (GI)?
GI is all forms of bleeding in the gastrointestinal tract, from the mouth to the rectum. When there is significant blood loss over a short time, symptoms may include vomiting red blood, vomiting black blood, bloody stool, or black stool.
Balaeswar is in severe pain and was instantly placed in ICU where he has been under treatment for the last week. However, for his condition to improve and for him to have a fighting chance, Bala needs to be in ICU care for another 15 days under close investigation.
“At 11 in the night, he came running out, screaming that he had to go to the toilet. Before he got to there, he passed bloody-liquid on the floor and started crying. We put him to bed, only for him to wake up and vomit blood every where. At 1 in the night, we were trying to find a hospital thinking that if only we found a hospital to take him in, he would be fine. But our ordeal hadn't even started,” says Nirmala, Balaeswar's worried mother.

How Can You Help
Balaeswar's concerned parents are willing to do whatever it takes to save their son but unfortunately, do not have the funds to afford his treatment in the ICU.
Bala in his school uniform before he became sick
His parents seek our help to save their son so that Bala can get the urgent treatment he deserves.