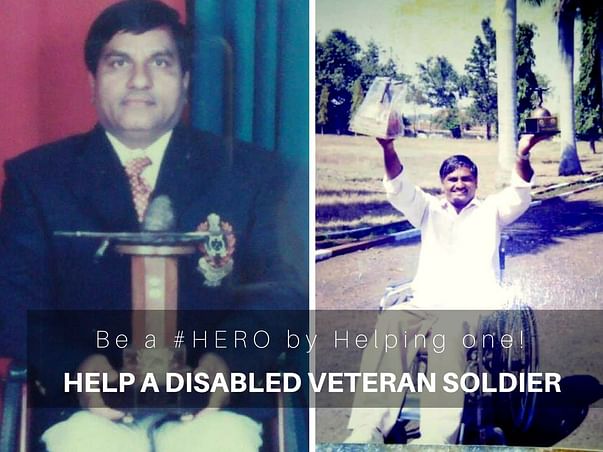 He stood to protect us and the country, day and night. Support a #VETERAN #PARAPLEGIC Soldier in his time of need..
Help Sepoy Pandurang Anandrao, Indian Army veteran and paraplegic soldier who stood up to protect the motherland during his service with the Indian Army, stand up on his own feet. The 62 year old veteran in his prime had been a state level sports champion and was even awarded by the Maharastra Govt. However, he met with a crippling spinalcord injury during his service in the Army and was declared paraplegic and wheel chair bound.
Sepoy Pandurang Anandrao has been fighting the excruciating pain for the last 20 years and even small task like sitting is hard. But the brave soldier that he is, He has over the years learnt to be independent physically even while being completely wheelchair bound. To be financially independent too, he wants to start a small Photocopying shop in Pune which he can operate even while wheelchair bound. Support him in his endeavour. Please donate generously for this cause via Milaap
Amount needed is INR 3.5 Lakhs for the photocopying machine, small shop and consumables to start the business and Sepoy Pandurang to stand on his own feet.