This 18-month-old's Liver Is Failing And Only You Can Save His Life | Milaap
This campaign has stopped and can no longer accept donations. 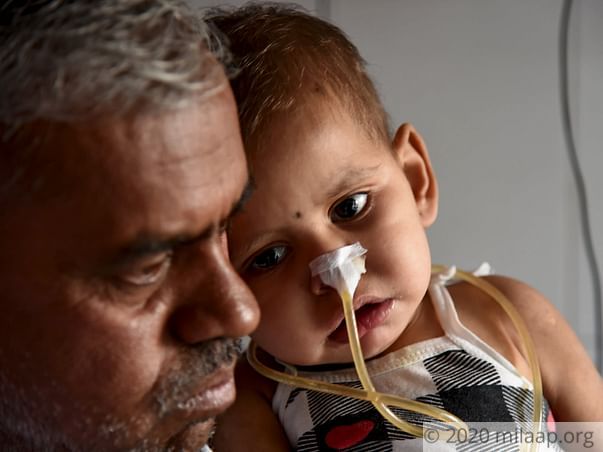 “Just 10 months ago, my first child, who was 3 and a half years old, passed away because of liver failure. Now, my second baby is going through the same and it’s heartbreaking. His condition is getting worse every day but there is still hope if he gets a liver transplant.” – Prashant, Sai’s father

Sai and Prashant at the hospital

Prashant and his wife, Jyoti, lost their first child to a rare and severe disorder on July 25, 2017. Now, within a year, they fear losing their second child to the same disorder unless the 18-month-old baby gets an immediate liver transplant. His mother is matched as a suitable donor but his father, who sold everything he had, has absolutely nothing left to save him.

Just when Sai was 8 months old, he started throwing up whenever he’d breastfeed or eat something. This alarmed Prashant to get him checked up because his first baby, Yash, showed the same symptoms.
Prashant and Jyoti, who have been through enough pain, were emotionally tormented once again when they found out that their second baby, was affected by a rare and severe disorder called propionic acidemia.

In simple terms, this is a very rare genetic disorder that is inherited from both parents. In 18-month-old Sai’s case, his liver is slowly failing and causing other parts of his body to fail too.


Jyoti and Sai at the hospital

“We were shocked, terrified and extremely sad when Yash passed away last year. He was just 3 and a half years old. He had propionic acidemia too. When we learned that Sai had the same problem and was slowly dying, we were just horrified. A few days ago, he was down with high fever too and his condition is now deteriorating. The doctors said that he needs a liver transplant immediately or else his fate will be the same as Yash’s.” – Prashant

Sai has breathing and feeding issues

“Any baby needs protein to grow. With Sai, if he has protein, it’s as good as poison for him. He is on a low-protein diet and over the past 10 months he hasn’t been able to grow much. Since the past few months, he has been unable to breathe normally. He breathes at a much lower rate than most babies or even adults. This has affected his heart. You can see how one thing is affecting the other. The doctors say that slowly, his brain will get affected too and one-by-one his organs will stop functioning.” – Prashant

Sai and his grandfather

Only a liver transplant can save 18-month-old Sai

Sai’s only hopes for survival lie in getting a liver transplant, his own liver being the primary reason for the metabolic disorder. Sai is in severe pain and has been suffering for over 10 months at such a young age. His mother is matched as a suitable donor too and the baby boy still has a strong chance of recovery if he undergoes the transplant.

Unfortunately, for his first child’s periodic treatments and medicines, Prashant has spent over 11 lakhs. Now, he is left with nothing to save his 18-month-old boy.

Jyoti and Prashant lost their first child to the same disorder

“Last year, I went all over India and we still couldn’t find a treatment for him. This disorder is so rare. The past 2 years have been nothing but hard for our whole family. My wife is completely devastated. Imagine what a mother has to go through after watching her own child die. Now, her second child is dying too.” – Prashant

Jyoti and Prashant are running out time to save Sai

Sai’s condition is getting worse with every passing day and he's dying slowly. Prashant used to own a salon but in order to provide money for his first child’s treatment, he sold it. He got 11 lakhs which all went towards the treatments of his first baby, who, sadly, passed away.

Now, Prashant works at someone else’s salon as a barber and earns around Rs. 8000 every month. To keep Sai alive until now, he even sold a small home he had in his village and has provided Rs. 3 lakhs.
Prashant hasn’t gone to work for 3 months since he needs to take care of Sai too. Now, he has absolutely no savings and nothing left to help his dying son. He is left with no option but crowdfunding.

18-month-old Sai is suffering from a severe and rare disorder that originates in the liver. His condition is deteriorating every day and to have some hopes of survival, he needs an immediate liver transplant. His mother is matched as a donor but Prashant, his father, has absolutely nothing left to provide for the life-saving transplant. Now, he needs your help to save his dying son.

Your support and contribution can save 18-month-old Sai.
Estimation Letter 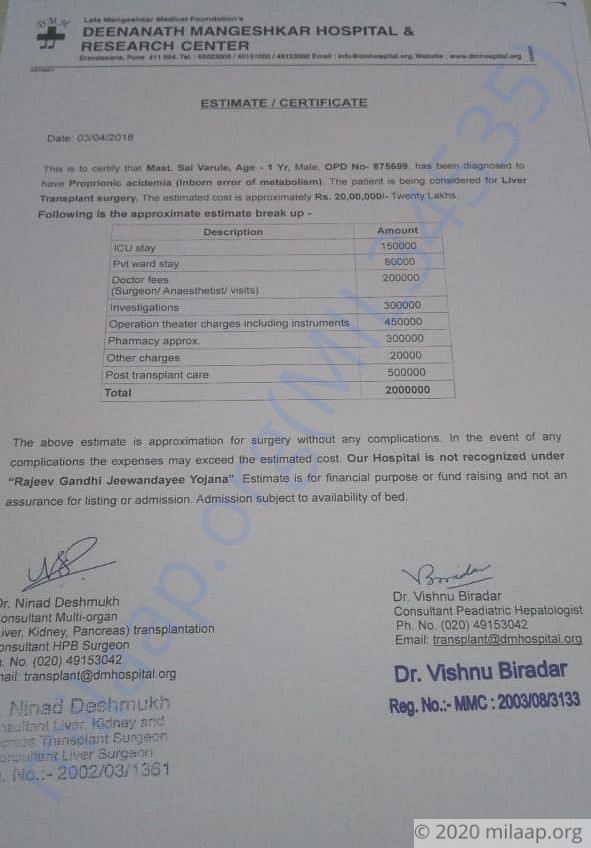 Thank you for the wonderful support that you have shown towards Sai Prashant Varule. I have some unfortunate news to share with all of you today.

Sai Varule passed away on last week on 4th May. He really had a tough fight but developed a few complications and was undergoing treatment for the same. In spite of the doctors best efforts, his little body could not take the stress and he left all of us.

His parents are really courageous who took a decision of Transplant and mother donated part of her Liver. His family is completely devastated. The funds raised on Milaap have been used towards his transplant which happen last month on 6th April. Since there are no pending medical expenses we are stopping the campaign with the family's consent.

The letter from the treating doctor, Dr Ninad Deshmukh has been attached with this update mentioning about his health and the treatment.

May his Soul Rest in Peace.

Thank you for the wonderful love and support that you have shown towards Sai Prashant. He is doing better now compared to earlier. His mother is recovering well and based on her health and stability she has been discharged from the hospital on Monday(16th April).

He has been showing good signs of improvement but the doctors have suggested him to be under observation in the cardiac recovery ward. He is under observation 24/7. He has opened his eyes but due to the medication he is still a little dizzy.

Thank you for all the wonderful love and support. Please do pray for his health and speedy recovery. Will keep you posted.

Sai and his mother underwent a successful transplant surgery on 6th April, Friday.
As of now,  he is under cardiac recovery and the doctors are suggesting that they will monitor him closely, as the coming few days are very critical. He will be moved to PICU, depending on his condition. Sai's mother was in ICU, but today she was shifted and now she's conscious and doing well. Both Sai and his mother will be dealt very cautiously with care, as the threat of infection still exists.

We will keep you all posted of any further developments, and sincerely thank you all, without your support we couldn't have made this far.
Thank you.

Donated to this campaign via Paytm? Click here if you can’t find your donation listed below.
k
karthik donated Rs.1,000

Donated to this campaign via Paytm? Click here if you can’t find your donation listed below.
k
karthik donated Rs.1,000

SB
You are sending a message to
Shilpa Barwe
Go back 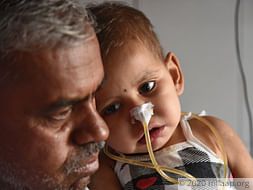