Vegetable Vendor's Son May Not Live To Go To College Without Treatment | Milaap
This campaign has stopped and can no longer accept donations. 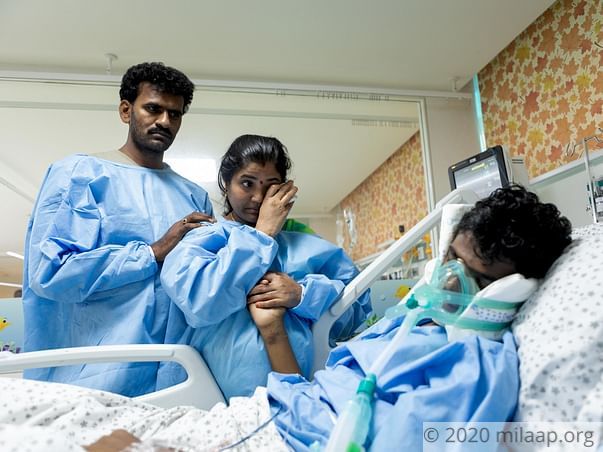 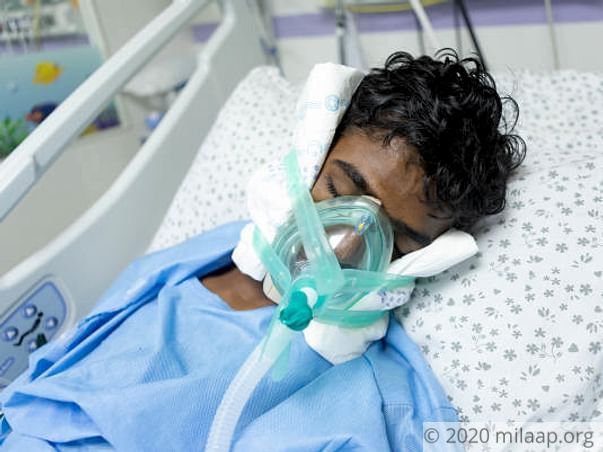 “My 17-year-old son cries in the ICU because he is worried about money. I tell him not to think like that. I promise him I'll find money from somewhere because I can't see him like this.” – Satyanarayana, Sai's father.

Sai scored 9.3 in his class 10 exams and was looking forward to joining college, but just before admissions – he became very sick. He has painful, life-threatening infection and blockage in his bile duct. He needs strong medication and a surgery. His father, a vegetable seller in Khammam, has borrowed heavily to keep the treatment going. He has nothing left to get his son a life-saving surgery.

Sai had to fight one illness after another

Sai's parents have been making monthly payments to clear the loans incurred on Sai's health bills for years. Sai has a blood disorder where his body makes faulty red-blood cells. Being faulty, they are rapidly destroyed causing increased bile in the body. Sai struggled with bad health – anemia, jaundice and frequent infections all his childhood. At 11, he had a surgery that finally improved his health.


“In 2012, he got a surgery where his gall bladder and spleen was removed. After that his health improved and he got sick a little less. Last month, his class 10 results came out and he got very good marks. We were very happy. But his stomach pain started again and we came to the hospital.” – Satyanarayana.

Sai came to the hospital with a severe stomach infection caused by gallstones blocking his bile duct. Sai is in the ICU taking strong antibiotics for both the stomach infection and pneumonia. As an emergency, a stent has been placed in his ducts, but it is not enough. The stones need to be removed surgically to stop his infections to spread any further.


“They told us his liver was infected and he has been in the ICU for days. I have already borrowed Rs 5 lakhs and his surgery hasn't even started. We can visit him a few hours a day and every time we see him, he asks for food or water. He cries because he knows treatment is expensive. All the time that he is in there alone, he is fretting about money. His mother is too upset to even enter the ICU.” – Satyanarayana.

Sai needs extensive treatment to be out of danger

Already, the infection has reached Sai's liver. He needs to recover from his infections and a surgery to remove the stones. Though he is critical and things can go very wrong, he is young and can recover. He only needs enough treatment.

Satyanarayana and his wife Sita make about Rs 10,000 a month selling vegetables. Their two sons are their whole life. No matter how much the difficulty, they have managed to provide them both with education. Satyanarayana is too scared to even think about not being able to pay to save his child from a painful end. 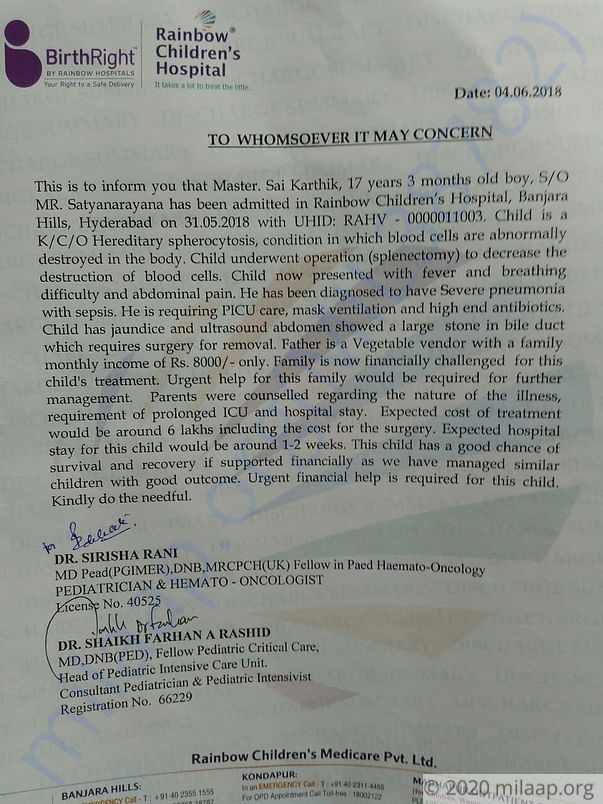 Master Karthik was discharged from the hospital and he is doing will now. He was suggested for regular follow-ups and there has been no complication so far.

Since all of Kartik's bills are cleared the family has expressed a will to transfer the remaining funds towards master Damruth's campaign - https://milaap.org/fundraisers/help-damruth which is in urgent need of funds.

Master Damrut will be undergoing a Bone marrow transplant for which the parents are financially constrained. Hence the remaining funds for Kartik's campaign will be mapped towards the treatment of Damrut.

We sincerely thank each one of you for the love and support which you have shown towards Kartik.

Thank you for the wonderful support that you have shown towards Sai Karthik. He is doing better now compared to earlier. His response to the treatment has been really positive.

Based on his health and response to the treatment he has been discharged from the hospital. He has been advised to visit the hospital regularly for routine follow-ups.

Thank you once again for the overwhelming love and support that you have shown towards Sai Karthik.

Scan & donate with any app
check_circle_outline Download payment receipt
Report fundraiser
Know someone in need of funds for a medical emergency? Refer to us
Rs.423,971 raised

Dear Brother, Will remember u in my prayers.... Fight strong... We r with u.

Dear Brother, Will remember u in my prayers.... Fight strong... We r with u. 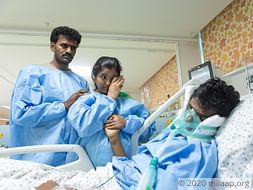