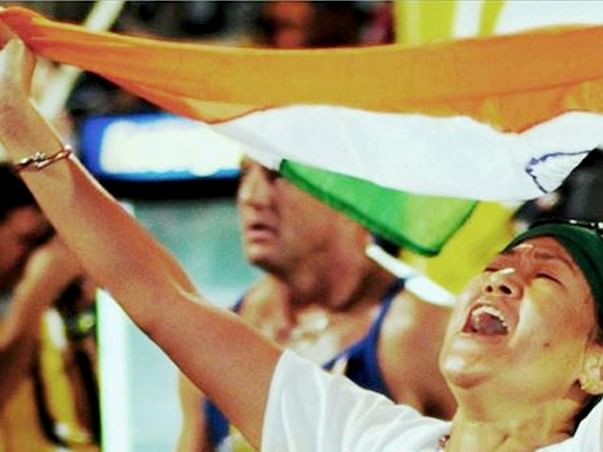 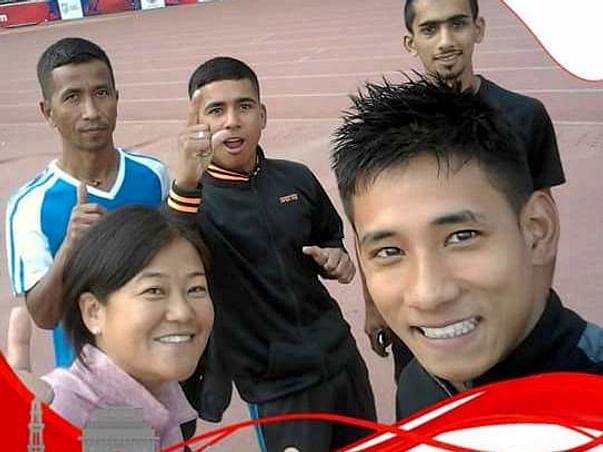 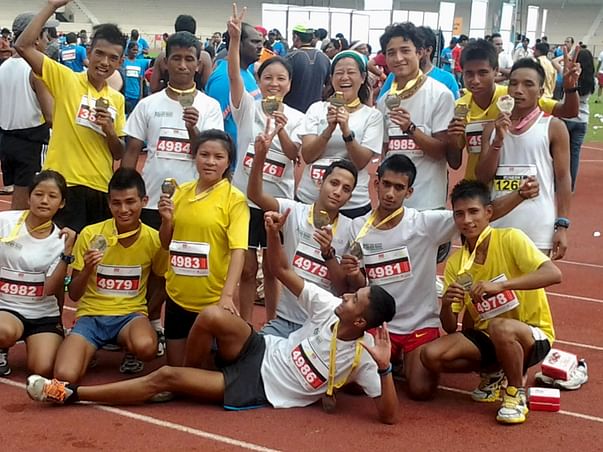 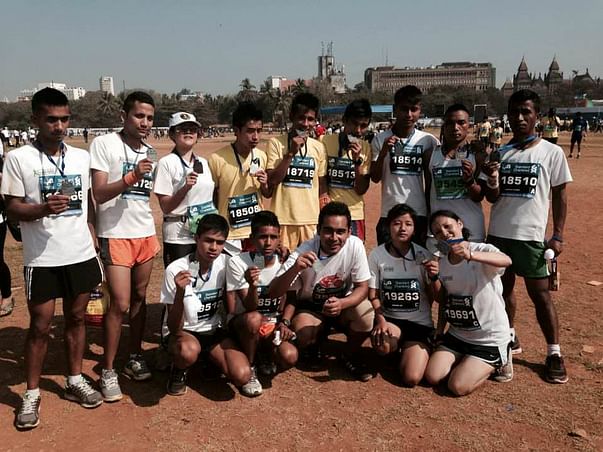 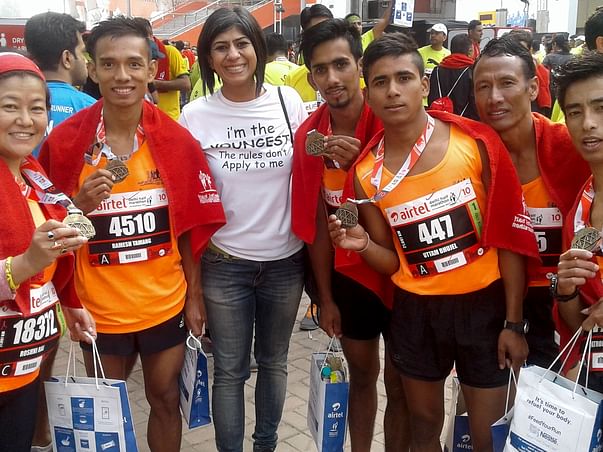 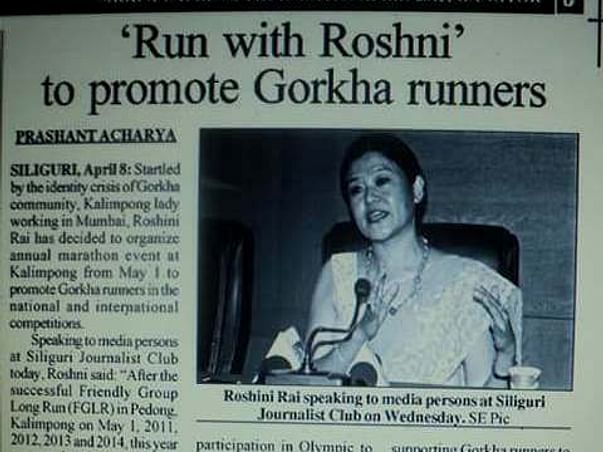 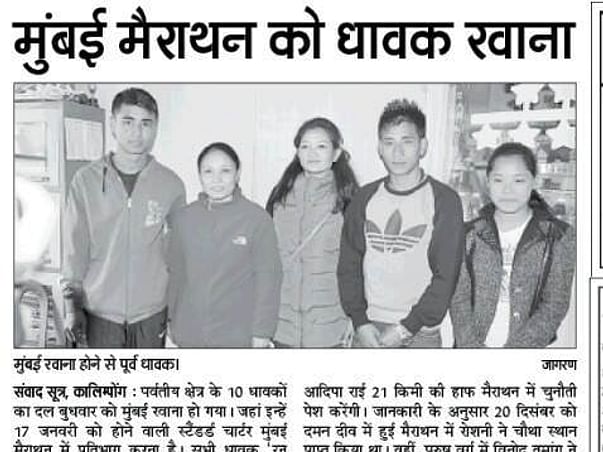 “Run with Roshni” is a vision, a dream. Roshni is not an individual.

From 2012, Roshni has started a project by name ‘Run with Roshni’, which is now a registered Charity Trust as ‘Run with Roshni Foundation’ (RWRF). Till now, RWRF has supported more than 30 runners from Darjeeling to run twenty different Marathons and Tiranga Relay 2015.
Following are the details of the marathons participated by team ‘Run with Roshni’.
RWRF organize Kalimpong Half Marathon every year on 1st May to select six local runners(three boys and three girls), whom they sponsor to run Mumbai marathon in January of the following year.

What's the vision:
• To empower and enlighten Gorkhas in India.
• To eliminate the identity crisis faced by Nepali speaking Indian in their own motherland.
• Bringing awareness among Indians, how the Nepali speaking people are Indians.
• To bring awareness all over India that Nepali is a recognized language under the Constitution of India and it is one of the languages mentioned in the Indian currency..

What's the mission:
• To support strong runners from economically backward class in Darjeeling to run national and international marathons.
• To make India proud by winning International and Olympic Marathons by the runners from Darjeeling.
• To let the world know, who the Gorkhas are by getting media mentions through running and winning marathons.

Ups and downs is a part of life but through Roshni’s story, we can inspire youngsters not get stopped by breakdowns in life. Roshni has set up an example by never giving up no matter how hard the struggle was for her.

How will the funds be used?
Three boys and three girls selected from Kalimpong Half Marathon 2018 will be fully sponsored to run Mumbai Half Marathon in January 2019. The funds will be utilized for the following;

1. to do their registration,

2.to buy their travel ticket, '

3. to arrange accommodation in Mumbai,

4. provide healthy food to the runners, when they are training and

5. to buy a pair of running shoes to each of them.

Though her campaign is a success all over India, most of us are not aware of the struggle Roshni had gone through. It is our effort to tell her stories behind the campaign. In lieu of all these evidences I find her a perfect subject to be documented for the welfare of our students from the hills of Darjeeling.

On portraying her stories as a documentary I can assure you that our students will be well prepared to cross the various stages of life without giving up the vision to follow their dreams. Furthermore, our young generations will be motivated and most importantly they will learn how to handle/overcome the hard times that everyone is likely to face in upcoming years, and stand on their own overcoming the battles which have just started. The person that one becomes after their successful and tough approach which in fact shall prepare them to make better judgment not only for their personal choices but also for the society and the environment they live in shall be of the utmost influence of a human character.

Alas, I decided to play a little role in this fight for identity by portraying Roshni’s stories to the world.

“You don’t need to resist or luxuriate in the path of defiance every time to seek change; change is certain, if only you put your well being into considerations and work through it… it shall matter."

Team Run with Roshni is very proud of Binod Pakhrin Tamang, Ramesh Tamang and Ranjeet Rai, who performed very well in TCS World 10k Bengaluru 2018 today. Binod Tamang is second in his age category. His finish time is 35mins 53sec. Ramesh is 4th and Ranjeet is 7th.
Congratulations boys.
We are very thankful to all our supporters, who made it possible for our three runners to go to Bangalore in the last moment to participate in 10km race.
Thank you Mr. Vishwanathan Jayaraman for always being there to support us. Thank you Procam International for always supporting us. Special thanks to Kavin Parera and Jayanti Poojari.
Thank you Brijesh Gajera for connecting our boys with Simanta, who not only gave shelter to our boys in Bangalore but he gave all the support required for our boys to run 10km race.
Thank you Bangalore. Team will be back again, more strong with more power from the mountain ;-)

Facebook
Report fundraiser
See how thousands are crowdfunding for their causes on Milaap
Rs.12,000 raised

Donated to this campaign via Paytm? Click here if you can’t find your donation listed below.
WY
Weeky donated Rs.10,000

All the best and keep up the good work!

Donated to this campaign via Paytm? Click here if you can’t find your donation listed below.
WY
Weeky donated Rs.10,000

All the best and keep up the good work!

You are sending a message to
Roshni Rai
Go back 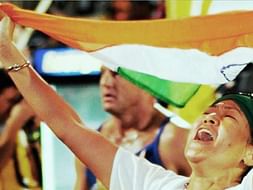