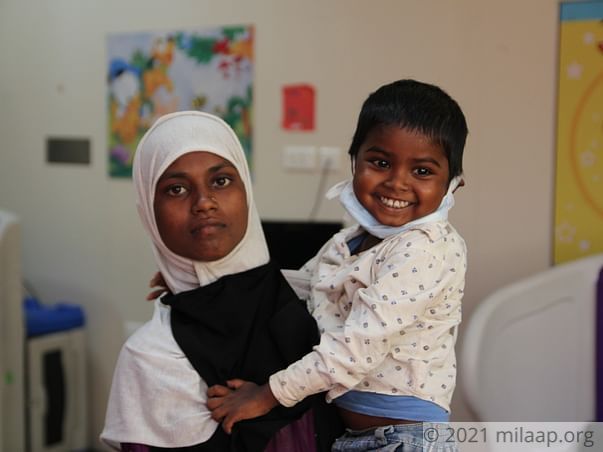 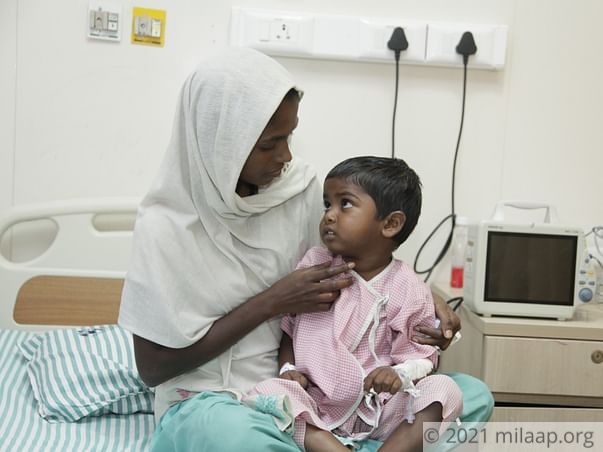 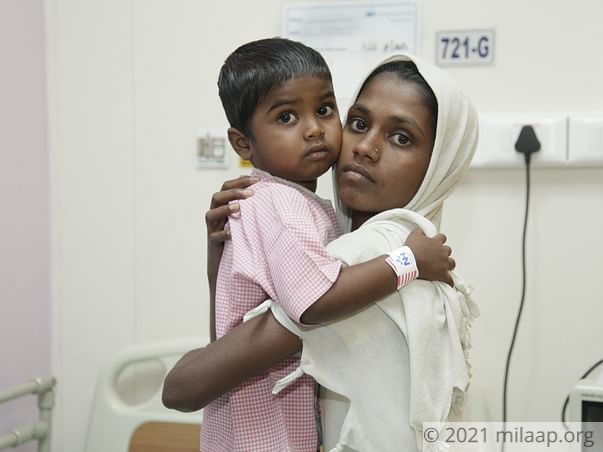 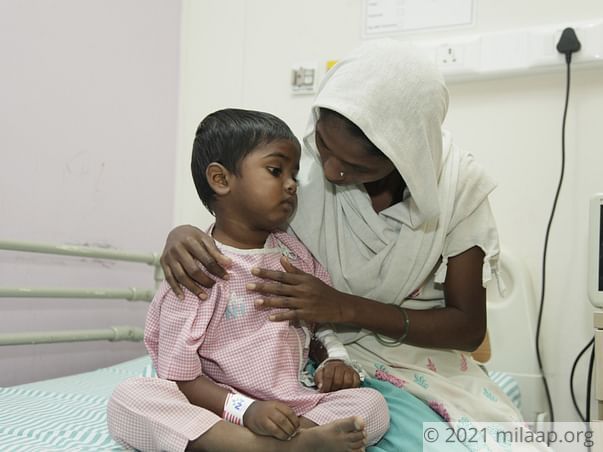 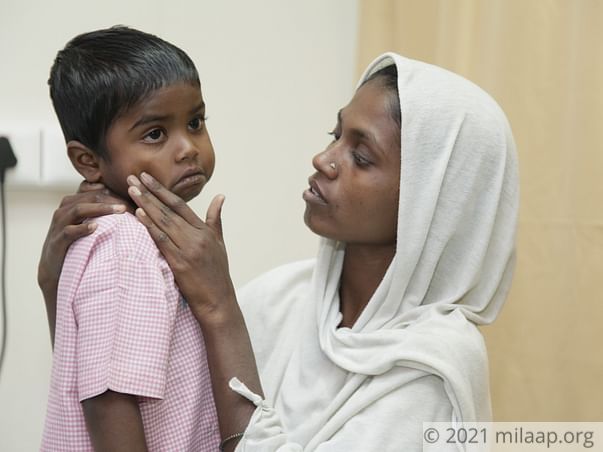 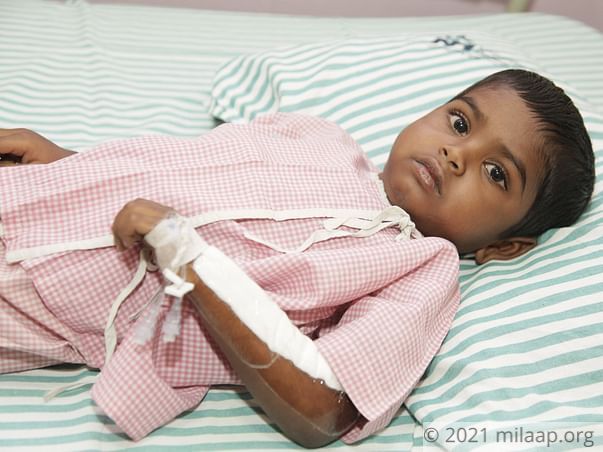 “We’re left with nothing. To support his chemotherapy, I need to feed him some fruits, but I can’t afford them. I’m in a terrible state right now and my son is critical too. This is such a poor condition for anyone to be in.” – Fatima, Rajhimad’s mother

Rahimad and Fatima at the hospital

Fatima fears that her 5-year-old son, Rajhimad, might not make it given how fast his condition has worsened. Rajhimad is in a lot of pain due to a fatal form of blood cancer. He needs additional chemotherapy to survive. Abandoned by her husband, Fatima, a 21-year-old mother of 2, has absolutely nothing left to save her son and feels helpless.

Residing in rural Karnataka, Fatima found it hard to get the right treatment for her 5-year-old, who kept succumbing to high fever again and again. No one seemed to know what was wrong with her child.

Out-of-her-mind with worry, Fatima took her son to Bangalore. She was devastated to hear that her sweet Rajhimad had cancer. It was blood cancer that would rapidly spread all over the body if left untreated.

By March 2018, the 5-year-old became extremely weak and critical. As an emergency to halt his cancer - he took 2 cycles of chemotherapy in just one month. But it is not enough. To survive, he needs additional chemotherapy for two more months followed by other treatments.


“I feel like crying when I see him. I can't sleep at night thinking about what will happen to him. He’s just a 5-year-old child and he has to go through so much. I feel so helpless. His condition improved slightly but recently I had to admit him to the hospital for 8 days because he was down with high fever.” – Fatima

Rajhimad is a cheerful child who doesn't know what cancer is

“His body is weak and he is tired all the time. But, he wasn’t like this at all. In fact, he was quite the opposite. Full of energy, he would constantly go out and play with other kids in the neighborhood. Now, he just lies around and doesn’t do much because he’s tired.” – Fatima, while weeping

Abandoned by her husband, Fatima is fighting hard

About a year ago, along with her 2 kids, Fatima went back to her mother’s home because her husband was a drunk. Fatima wanted to bring up her children in a safe, more loving home.

“He left us a long time back and he doesn’t even care that our baby has cancer. He never asks about them. I receive absolutely no support from him. I don't have a job and my mother has helped me with Rajhimad’s treatments and medicines so far.” – Fatima

Fatima has been married for 7 years now. At the age of just 21, Fatima already has 2 kids. She was a housewife for the longest time and now she has no support from her husband. Now, she is in Bangalore, fighting hard alongside Rajhimad. Her situation is so bad that she doesn’t even have money to feed Rajhimad properly, who needs certain fruits as a part of his diet too.


“My second baby is just one and a half years old. I had to leave my baby at home and come to Bangalore with Rajhimad. My mother is taking care of him and I haven’t seen him in so long. This is such a bad time for the people I love.” – Fatima

The 5-year-old’s only hope of survival is to get, at least, two more months of additional chemotherapy. After that, he will undergo certain tests that determine if the cancer has reduced or not.

Fatima is in dire need of help to save her son

Fatima is running out of time to help her son. She hasn’t gone to a college and has been a housewife for the past 7 years. She has no job and her husband, who abandoned his family, does not support her in any way.

Her mother, who is a laborer, has helped her provide for minor treatments and medicines. She has borrowed around Rs 40,000, from friends and family who also borrowed from others to help the family. They have absolutely no other way of saving the child. The total cost of chemotherapy is estimated to be around Rs 4 lakhs. Fatima, simply, cannot afford this and is left with no options.

5-year-old Rajhimad needs additional chemotherapy to fight a deadly form of blood cancer. His mother, Fatima, is fighting alone to save his life but she has nothing left to provide for his treatment. Now, she needs your help to save his life.

Your support and contribution will save 3-year-old Rajhimad.