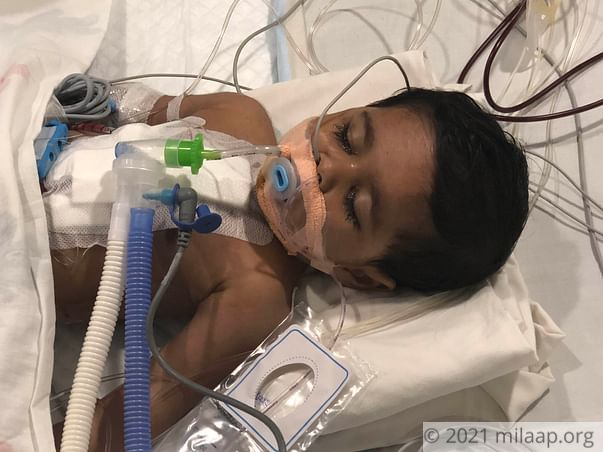 “We could not afford tatkal tickets, so we took a general ticket. This is festival time – so it was very crowded. All we could think of was the doctor's worst warnings about what could happen to Pari.”

Pari is a 1-year-old baby and she has several heart defects. Her father Jitender has been trying to arrange for a life-saving heart surgery, but time has run out. Two days back, Baby Pari started screaming because she could not breathe. Her worried father immediately booked tickets from Kanpur to Delhi and got her admitted. Pari needs a heart surgery immediately to survive.

Pari's doting grandmother named her so because she was just as magically joyful as a fairy (Pari means fairy). She is her parents first child and her birth was a very happy occasion for the family. It was for a cough that her parents took her to the doctor when she was just 2-months-old.

To their shock, they were told that Pari had a heart condition and needed a surgery at the earliest to survive. Jitender was simply heartbroken that his angel had a condition this painful – would he be able to manage treatment given his poverty?


All Jitender wants is to save Pari

“I heard that Chattisgarh had a hospital where children's heart surgeries were done for free. I borrowed thousands of rupees and took Pari there. They gave me a date in 2019. I came back disappointed because I didn't know what else I could do.”  – Jitender

Last December, on a friend's advice, Jitender once again borrowed from everyone he knew to take Pari to Apollo Hospital, Delhi. It was here that the doctor gave him firm hope that his daughter could be saved. Jitender applied for government aid and was very reassured when he got it. Unfortunately, that is when Pari's time ran out.

Pari's father has tried everything to save her

Despite her expensive medicines, Pari's condition only started getting worse. Two days back, she started crying and then screaming because she could not breathe. That was when, Jitender says, all the warnings the doctor gave went through his head. He could not lose his daughter at any cost.

Jitender booked the cheapest tickets in an overnight train from Kanpur to Delhi. He and his wife stood for hours in the train because it was crowded. They held their screaming baby in a towel and tried their best to soothe her through the discomfort. They admitted her to the hospital just before Pari had a minor cardiac arrest. Pari needs a surgery immediately.

“We got her admitted today and the whole day, we forgot to even eat. Pari's mother simply refuses to eat and I am also not very hungry. For the surgery, we need Rs 4 lakhs – and for someone who doesn't even have Rs 40,000 in his pocket – I don't know how I will save her. She is my only child.” – Jitender

Jitender works in a small cloth shop in Kanpur and earns Rs 4,000 a month. He never expected to spend lakhs on saving his child from certain death. He is utterly unprepared for this emergency and has nowhere to turn to for help.

Taking the family's poor financial condition, the government has sanctioned Rs 1.5 lakhs to the family. Despite everything he has done in the last one year to save his daughter – he still needs to arrange for Rs 4.5 lakhs to save her.

Please donate and give this desperate father a chance to save his child.