This teenage boy's body will continue to swell up without treatment | Milaap
This is a supporting campaign. Contributions made to this campaign will go towards the main campaign.
This campaign has stopped and can no longer accept donations.
Milaap will not charge any fee on your donation to this campaign.

This teenage boy's body will continue to swell up without treatment 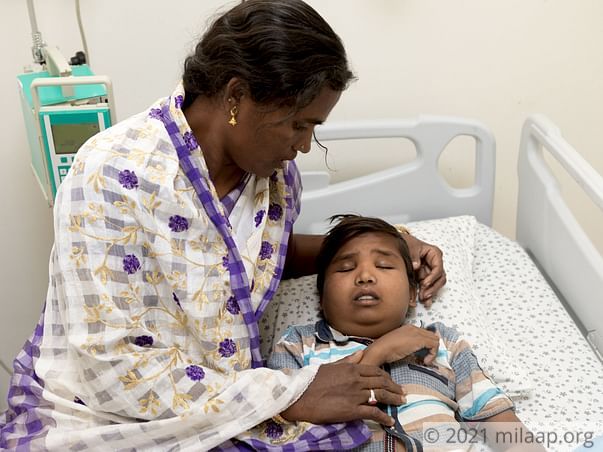 “He can’t eat or sleep. His body swells up and he can only lie down on the hard floor because it is cold. He has been this way for 12 years now.”

Nithin is a 16-year-old boy who has only seen suffering for three-fourths of his life. When he was just 4, he stopped eating properly. He wouldn’t eat vegetables or rice but only crave meat. If there was no meat at home, he would go to sleep hungry and crying. Initially, his parents thought he was throwing tantrums, but little did they know that everything else made him so uncomfortable that he preferred going hungry to eating.

Nithin suffers from a rare disorder which makes him lose protein from the body and his blood count also keeps falling. When he was younger, he would need a blood transfusion once every 3 months and protein infusions from time to time. Over the years, his condition has gotten so bad, that now he needs infusions once every 10-15 days in order to keep his strength up.

Whenever he has an infusion, he is fine for a week. Then he starts slowly getting weaker and weaker over the next few days, and then, it is time for his next infusion. He feels very uncomfortable and can’t sleep on the bed since only sleeping on the cold floor gives him any respite from his suffering. Not just that, he can barely eat, or sleep. All he does is lie down in the room and stay awake while suffering in this misery. For a 16-year-old, this kind of life seems straight out of a nightmare.

He has never enjoyed the normalcy of life

“He used to go to school before, even though irregularly. But since the last 2 months, he hasn’t been in a condition to get out of the bed to go to the school.”

Nithin can barely do anything like other boys his age. At 16, he should be full of energy and hopes for the future. But he can’t even go to school because of his weakness. Before, for every 2 days of school, he had to skip 2 or 3 more to stay home and rest. He really wants to play with his friends and play outside with them, but his overly fragile health doesn’t let him do anything. All the engagement he has is when his younger brother Nikhil sits down with him to talk to him.

Nithin's family has seen him suffer for far too long

“My younger son can’t see his pain. He cries and asks me when his brother will get better. When I ask him to go out and play, he says that he doesn’t want to his bhaiyya alone, and that he would rather spend time talking to him, even if he is too weak to talk back.”

Nikhil, his younger brother, is 8 years old and cries at seeing his older brother’s pain. He keeps asking his mother how long it will take for Nithin to get better. He is always ready to forego playing with his school friends to spend time with his brother, sitting next to him on the floor, talking. Nithin’s parents often get overwhelmed at this, and they wish is for their older son to get better and have a normal life like the others. But the biggest hindrance they face is the lack of funds.


“We have borrowed money from so many people that we feel ashamed of stepping out of the house. They have been very kind and helpful, but even they can’t help us anymore.”

Nithin’s father, Suddu, works as a daily wage labourer for a meagre Rs 2,000 a month. His income isn’t even enough for getting them two meals a day, so affording treatment worth Rs 3 lakhs is out of the question for him.

Over the years, Nithin’s family has spent over Rs 15 lakhs towards keeping him alive. They have borrowed money from everyone they know, and now there is no one who can help them out, but you. Nithin can recover, but for that to happen, they need your help.

Your contribution can save Nithin and give him the healthy and happy life he deserves. 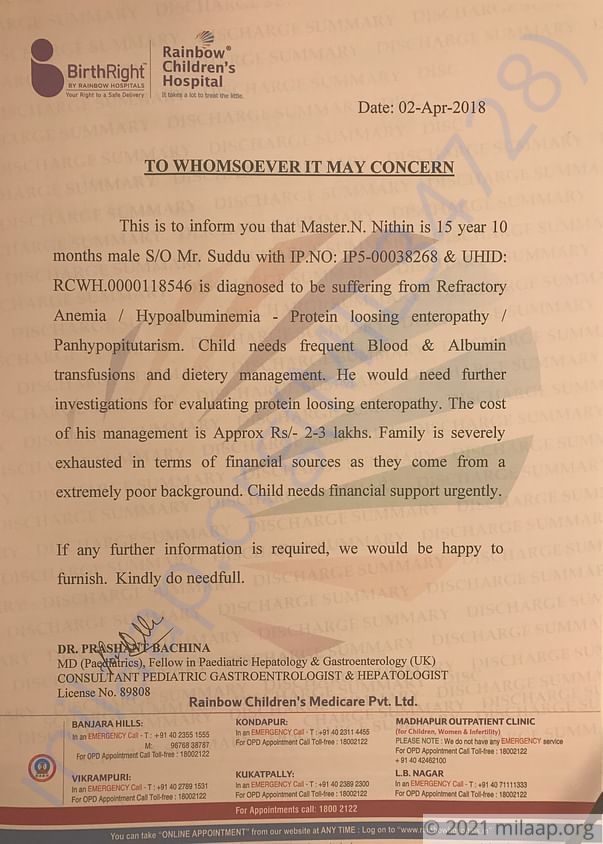 Here is a quick update on Mast. N. Nithin. He got admitted for 20% Albumin Transfusion - A  Day Care procedure on 23-Dec-2019. We will keep you posted on his health condition.

Please keep him in your prayers and thank you for all the support.

We wish to update you that Mast. Nunavath Nithin’s condition has worsened as he is suffering from side effects of his treatment. He has severe stomach ache and vomiting. The doctor’s want to run some tests and this would cost us around ₹30,000.

Thank you for the support you’ve shown Nunavath. Please continue to support him and pray for him.

We wish to update you that Mast. Nunavath Nithin got discharged after undergoing treatment for a medical condition of swelling over face and abdominal distention.

Thank you all for the continued support.

Scan & donate with any app
check_circle_outline Download payment receipt
Report fundraiser
Know someone in need of funds for a medical emergency? Refer to us
Rs.37,379 raised

5 Supporters expand_more
This campaign has stopped and can no longer accept donations.
$150 Million +
Raised on Milaap
Are you in need of financial support for medical or personal emergencies, or a social cause?
Start a fundraiser
Or
Know someone in need of funds for a medical emergency? Refer to us 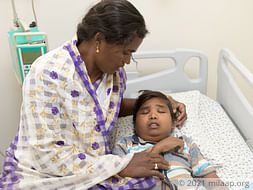 This teenage boy's body will continue to swell up without treatment