Deadly Swine Flu Will Take 2-Year-Old’s Life Without Urgent Help | Milaap
This is a supporting campaign. Contributions made to this campaign will go towards the main campaign.
This campaign has stopped and can no longer accept donations. 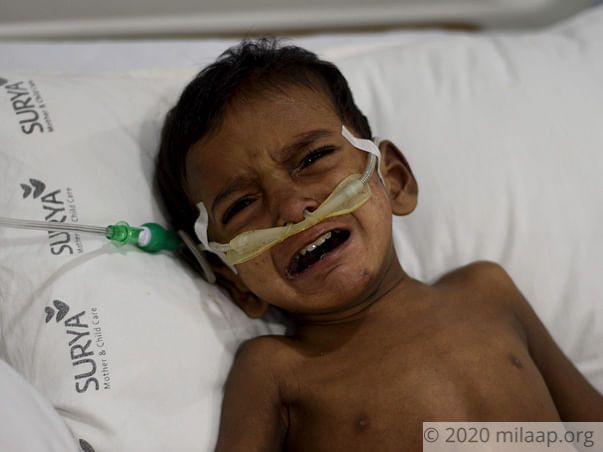 2-year-old Aniruddh is the latest victim of swine flu, a deadly and easily transmittable viral infection that is claiming lives in Western Maharshtra and Gujarat currently. Doctors say he may have contracted the disease due to his family's poor living conditions in an overpopulated slum of Thergaon near Pune. He was placed in an isolated ward, owing to the communicable nature of the disease. He is still not out of danger and needs urgent help. His poor parents are left with nothing and are scared they will lose him.

When Aniruddha developed a high fever last month, his mother, Komal thought it was normal and gave him medicines. But when it did not subside even 3 days later, and he developed breathing problems, Komal knew it was not something to be ignored.

“I was waiting for his father to come back home from work when Aniruddha started choking and gasping for air. I started getting scared when a strange sound started accompanying his vigorous breathing. We immediately rushed him to the hospital in the dead of the night. - Komal, mother

Aniruddha was immediately put on ventilator support – doctors suspected pneumonia first but after a couple of tests it was confirmed that it was a case of swine flu and his life was in grave danger. For 15 days that he was on the ventilator,  barely eating or sleeping. Now, there is hope of saving him, but the only barrier is money for the poor family.

Komal can only meet Aniruddha for some hours during the day

Komal, her husband Nitin and their 3 children lives in an overpopulated slum

Life was becoming increasingly hard for Komal and Nitin. Out of the 10,000 rupees the family managed to earn, Rs 7,000 went for rent alone. Their 3 children- 9-year-old Aditi and 5-year-old Aaradhna and 2-year-old Aniruddha's expenses were met using the remaining Rs 3,000. Komal and Nitin were desperately trying to provide them better-living conditions. But as fate would have it, all their hopes crumbled when Aniruddha, their youngest child was diagnosed with swine flu. Komal had to immediately put her school-going daughters in the care of her mother and stay in the hospital with Aniruddha.

Being the youngest, Aniruddha was pampered by his family and his favorite pastime was pulling his sisters’ hair until they shrieked. He loved playing with steel vessels and would tap at them using ladles, thinking he made a musical instrument out of it. At other times, he would run behind his mother, following her wherever she went – whether it was to visit the neighbors or get water from the pump, they were inseparable. Now, he is lying motionless on a bed and Komal can only watch her once-cheerful Ani crying.

“His throat hurts and I can understand that he is in a lot of pain from the sound of his cries. He has become so weak.”-Komal.

Nitin is a poor driver who works day and night to provide for his family of five. If he misses even a day of work, he loses pay and therefore he never used to take a lot of leaves to be with his family. He worked really hard – on some occasions, he would have to spend days away from home on trips. But when Aniruddha got sick, he had no choice but to take care of his child in hospital. But he could do that for only a few days as his employers threatened to replace him if he didn’t join back soon. This poor father had to go back to work with a heavy heart and the fear of losing his child.

“My husband had no choice – we had taken a lot of loans from local moneylenders and without a job, he wouldn’t be able to pay any of it back. We have exhausted all the money we had and have nothing left. Aniruddha still needs a couple of weeks in the hospital to completely recover. Without my husband with me, I feel completely helpless.”-Komal

2-year-old Aniruddha is suffering from swine flu. His life is still not out of danger. Anything can happen if he were to be removed out of intensive care due to his family’s lack of funds. With his driver father away, his mother is struggling to save him.
Estimation letter 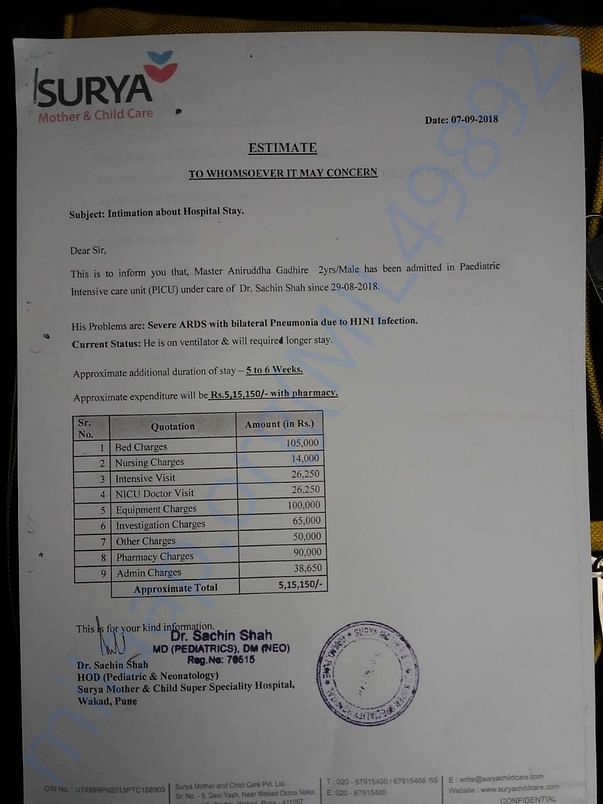 It is with a heavy heart I inform you all that Aniruddha could not make it.

He was very sick and fought very hard. Last week he developed a fever and was put on the ventilator. The doctor told that the infection had reached his lungs.

He did not have any energy left to fight more. Please pray that his soul rest in peace.

Funds raised will be utilized  to clear his medical expenses.

Thank you all for showing us your support.

Patient has been admitted to the PICU of Surya Mother & Child Care Pvt Ltd for respiratory distress. As his distress started worsening he was put on ventilator support & was diagnosed  to be suffering from Bilateral Pneumonia with ARDS due to H1N1 infection.

He was ventilated for 15 days & gradually weaned to oxygen support & was planned to be discharged. But again developed another Pneumonia & at present on ventilator.

Thank you for love and support.

Here's a quick update on Aniruddha's health. Aniruddha is currently in the hospital ans is recovering from Swine flu. He is responding well to the treatment and will be discharged soon.


Thank you once again.

You are sending a message to
Nipun bhardwaj
Go back 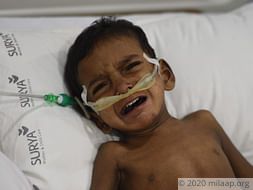