Widowed Mother Has Just 24 Hours To Save Her Son | Milaap
This is a supporting campaign. Contributions made to this campaign will go towards the main campaign.
This campaign has stopped and can no longer accept donations. 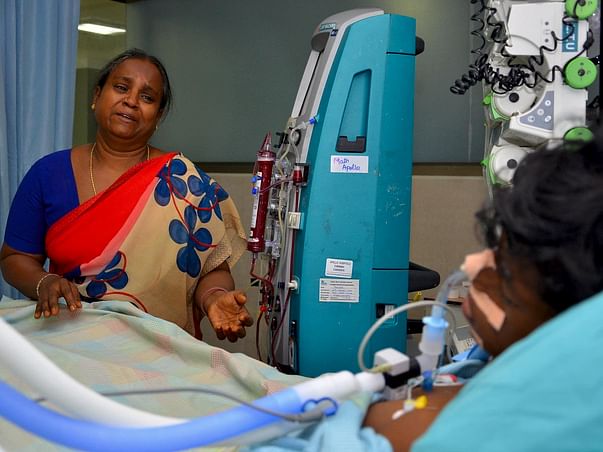 “The last words my poor child said to me before he fell unconscious were: ‘I don’t know if I will make it’. There was so much pain and suffering in his words. Doctors had to forcefully sedate him because he tried to remove all the tubes from his body due to severe itching. My kid is at death’s door and I can only watch helplessly.”-Mageshwari, mother of 18-year-old Naveen Kumar.

It was just last week that Naveen had told his mother that he had formulated a proper time-table to study more efficiently and score better in exams. After all, he had just recently secured admission in the diploma course that he wanted. He believed that this would pave way for his ultimate dream of providing a better life for his mother, who had struggled to raise him. But as fate would have it, he fell sick the very next day and from there, his life was in a downward spiral from which recovery is not possible without an immediate liver transplant. His elder brother, Arun, is a matched donor, and only money stands in the way of life and death for this ambitious teenager. His widowed mother, who has not been able to work after an accident, is struggling to save him.

2 days of continuous vomiting was not due to appendicitis, but something more dangerous

Last Thursday, while lying down to sleep on the floor in their small house in Kumbakonam, Naveen told his mother Mageshwari that he felt something was wrong. His mother dismissed it as stress from studying too much and told Naveen to rest and forget about it. Early morning next day he started vomiting, and it did not stop for hours. Medicines from the local clinic did not help him and his mother and brother rushed him to the hospital when he started fainting too.


Naveen (first from right end) during a family function

“He started looking so sick – it was so unlike him to appear so weak. He was never one to get sick often, so I wondered if the ration rice that I had cooked the other day was spoilt. The doctors suspected jaundice first and then appendicitis, when he complained of severe stomach pain. He was admitted for 2 days, but never got better. That is when we decided to take him to a better hospital in Trichy where doctors confirmed that his liver was completely damaged.”-Mageshwari.

Naveen’s brain is filled with infected fluid now, his system will shut down without a transplant

Naveen’s condition started deteriorating rapidly after his diagnosis. He became so weak and couldn’t even speak much, after which he was rushed to a good hospital in Chennai from Trichy. Soon, fluid started accumulating in his brain which had to be removed immediately. He has severe stomach pain because of fluid retention in his abdomen as well. If he does not get a liver transplant soon, his other vital organs will also start getting affected, which will only end badly for this poor teenager.

“We have not been able to rest peacefully even for a second in the past few days. We have come to Chennai in the hope that we will be able to take him back home alive, but every minute he goes without a transplant, he is getting closer to death. His happy face flashes in front of me very time I look at him now –I don’t have the courage to see him suffering now.”-Mageshwari.

Mageshwari has not been able to work after an accident, she cannot afford to save her son

After her husband’s death 10 years ago, Mageshwari has been struggling to make ends meet. She initially took up work as a tailor at home itself, which she managed along with housework and bringing up her two sons – Naveen (18) and Arun (21). She was completely disowned by her husband’s family and survived on her meager income of Rs 8000 a month. But after a recent accident that left her with a severe arm injury, she has not been able to continue tailoring. She is dependant on the mercy of her siblings for survival ever since.

“Even when we didn’t have enough money for food, I did not pull out either of my children from school. Many people told me to stop Arun’s studies and send him to work, but their education was important to me. Arun recently graduated from a government engineering college and had just been looking for jobs when Naveen got so sick. We are completely helpless – we had been each other’s support through all these years. We want to see him alive now – that is our only prayer. Please help us.”-Mageshwari.

18-year-old Naveen Kumar’s liver is a 100% damaged and there is no way he can survive, except with an urgent liver transplant. His brother, Arun, is a matched donor, but his widowed mother does not have enough funds to save her son. He is currently unconscious and getting more critical with every minute.

Your kind contribution can save Naveen’s life 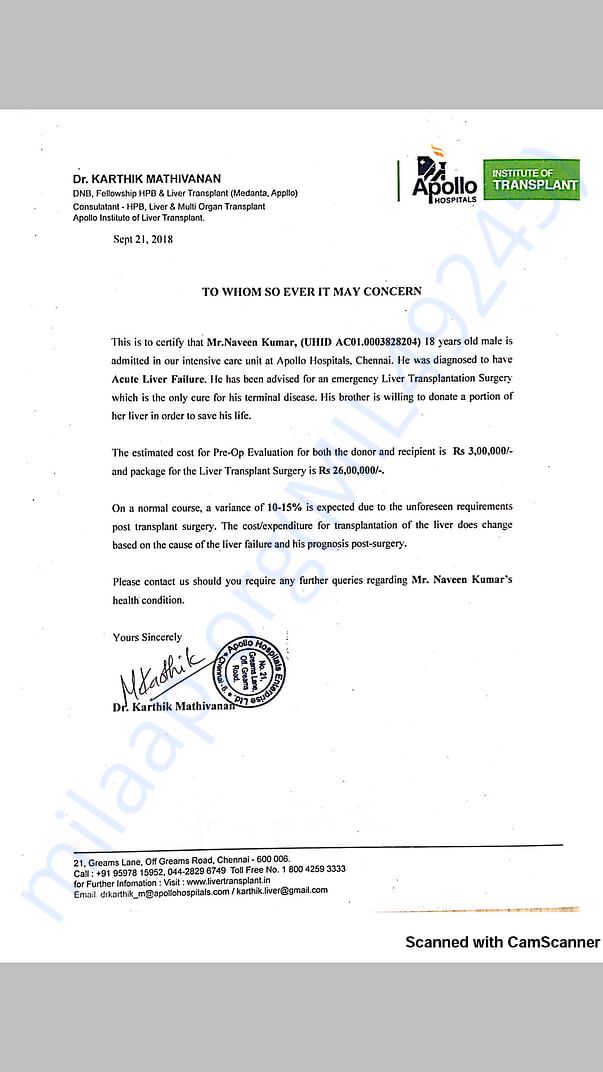 Naveen is doing well. He has recovered and is at home now. Here are few recent photos of Naveen.
Dear Supporters,

Naveen who is undergoing treatment at the neuro rehabilitation centre in Bangalore is planned for discharge today. He is doing better and recovering slowly.

Here's an quick update on Naveen. Naveen is currently undergoing treatment at a Neuro rehabilitation centre in Bangalore. He is recovering slowly. We shall keep you posted on the same. 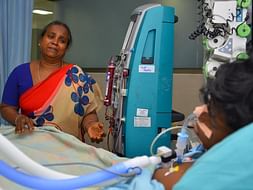