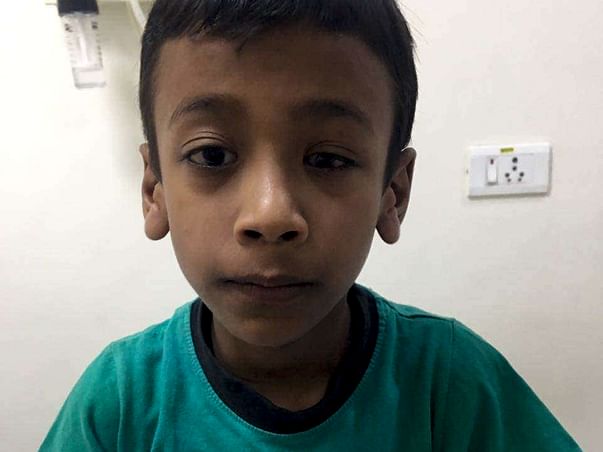 6 year old Krishna cannot hear from any of his ears. He requires a cochlear implant in one ear so he can hear some sounds. The family comes from a very humble background and need help to raise 8 lakhs for their son's treatment.
The doctors told the parents that their premature baby wouldn't make it. But Krishna managed to overcome a terrible infection and lived to become a healthy baby. Now, 6-years-old, Krishna still doesn't speak. He is deaf in both his ears. A cochlear implant will help him hear his first sounds. His father, a carpenter, needs financial help giving Krishna this life-changing surgery.

Like his namesake, Krishna has a strong will to live
When he was born, the doctor told Krishna's parents – Ajit and Teena, that there was no hope. Teena had chikungunya and the baby had contracted the infection. To save him, he had to be delivered early.

“When Krishna was born, he could open only one eye due to the infection. The doctors said we should take him home, but we begged them to keep him in ICU for as long as needed,” says Teena.
To everyone's surprise Krishna beat the infection and lived. To the parents, his recovery was the bright side to a very difficult pregnancy and childbirth. It was a miracle that affirmed their faith in God. “We spent all our savings, but we were happy that our baby made it. That is the most important thing,” says Teena.

But, when Krishna was 2, his mother noticed something strange about him on Diwali. “We were worried the noise might scare him, but he seemed to have no awareness of it. So we realised that there might be something wrong with him and took him to the doctor,” she explains.

The doctors told Teena and Ajit that their son had bilateral hearing loss - he was deaf in both ears. He needed a cochlear implant, a procedure that costs Rs 8 lakhs. The parents had depleted all their savings during Krishna's birth and are still paying back for some of the expenses and can't afford the treatment.

Little Krishna can't express himself because he has never heard speech
Krishna is his parents' miracle. He is a very sweet child, adored by his parents and older sister. He is very happy to play with other children. He has not been to school and is clearly waiting for the day he can start. He pretend-plays with his sister's uniform, bags and notebooks and gets very excited when his family talks about school.

The parents hoped that Krishna would begin speaking and even sent him to a private school for a short while. But at 6, they are worried. Will he ever be able to express himself? “He understands everything we say to him. He just doesn't speak. How he will make it in life if he cannot communicate,” says Teena.

His parents have found a special school where he can learn sign language which will help him communicate. Because he is deaf in both ears, his parents want him to get some hearing which will help him navigate everyday life without being in danger. This is possible only through a cochlear implant.

The parents are struggling to give their children a better life
Ajit came to Bangalore from Assam to work and send money to his family back home. But for the last  5 years, he has not been able to send money back because of his child's medical expenses. He works double shifts from 9 a.m. to 10 p.m. at a furniture factory. But he is happy to do all the hard work if he can save enough for Krishna to get a better life.
With his current monthly salary of Rs 15,000 he does not have the funds to help Krishna hear. He will be grateful for any support that can improve his child's life.
Estimation letter 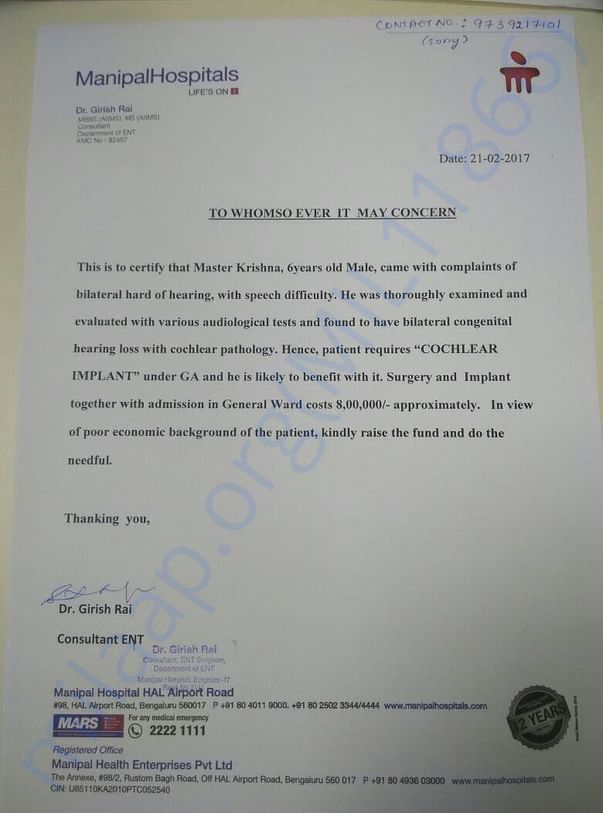 WISH YOU ALL THE BEST

WISH YOU ALL THE BEST 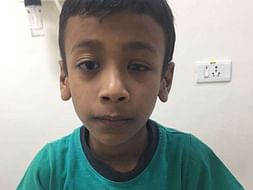