This Young Boy's Blood Disease Has Turned Into Deadly Cancer | Milaap
This is a supporting campaign. Contributions made to this campaign will go towards the main campaign.

This Young Boy's Blood Disease Has Turned Into Deadly Cancer 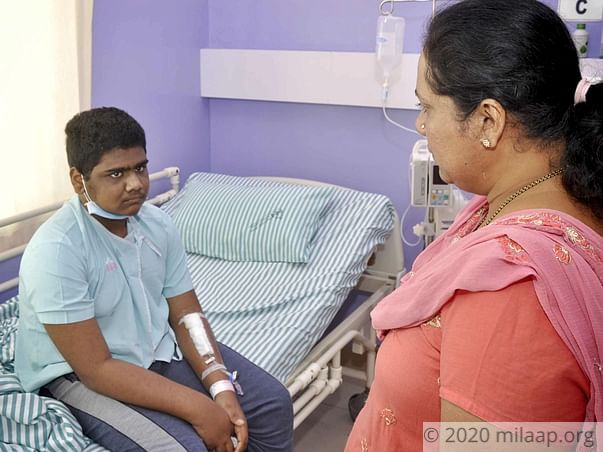 When Vignesh’s friends call and ask his mother, Vandana, if they can talk to him, he just brushes the phone aside. “I don't want to talk to anyone,” the sullen 12-year-old says. Vignesh is weak and tired. He’s in a lot of pain due to the boils in his mouth, but most of all he’s sad because he overheard his parents saying the word ‘cancer’. Vignesh has been fighting a blood disease for over a year now, and like most of us, his parents too didn’t realise the seriousness of the disease. Although they did everything they could to get him treated, the disease proved to be aggressive.

“We found out that the blood disease has progressed into cancer. The doctor told us that it’s very rare. We're in shock. I can’t let him see me in fear. I want him to stay strong because he has a big fight ahead of him.” – Vandana, mother

Vignesh is a class 6 student, who before his diagnosis, was extremely active. When doing school work or playing with his friends, he would spend his time pulling apart parts of his toy car and learning what each part does. Vignesh loves cars, and his dream is to grow up and own the ‘best car in the world’. However, in November 2017, after days of fever, he was diagnosed with aplastic anemia – a condition in which the body stops producing enough new blood cells.

“He started blood transfusions, but since his condition was serious he had to undergo a bone marrow transplant in February 2018. We used all our savings, borrowed from everyone.” - Vandana

The disease proved to be deadlier than they expected

Vignesh slowly began recovering. He started feeling better, but would still have fever, cold and cough occasionally. The only thing he asked Vandana and Vinayak was if he could watch Jurassic World in the theatre, now that his ‘infection’ was gone. But it was too much of a risk for Vignesh to step out. While all his friends went for the movie, Vignesh stayed at home, watching the old Jurassic Park films. Unaware that his fight wasn't over yet.


Vignesh with his father, Vinayak

“From then on he’s been very withdrawn and quiet. I think he realized then that he wasn’t like his friends.” - Vandana

They have exhausted everything on his earlier treatment, they need your help to save him now

Vignesh now needs a bone marrow transplant to fight cancer. He’s undergoing chemotherapy, and needs one more cycle before he can get the transplant. It’s his final chance to live a healthy life. However, Vandana and Vinayak are at a dead-end. They have spent everything on his treatment so far. Vinayak is a small-time retailer and makes a modest income, enough to afford his children’s education and three square meals a day. 40 lakhs for a bone marrow transplant is an unimaginable amount for this family. They’re desperate to save their son and give him a fighting chance to beat the disease.

UPI: rzpy.givetomlpvigneshm004@hdfcbank (Copy to clipboard)
Or
Click here to read the instructions before you make a bank transfer. 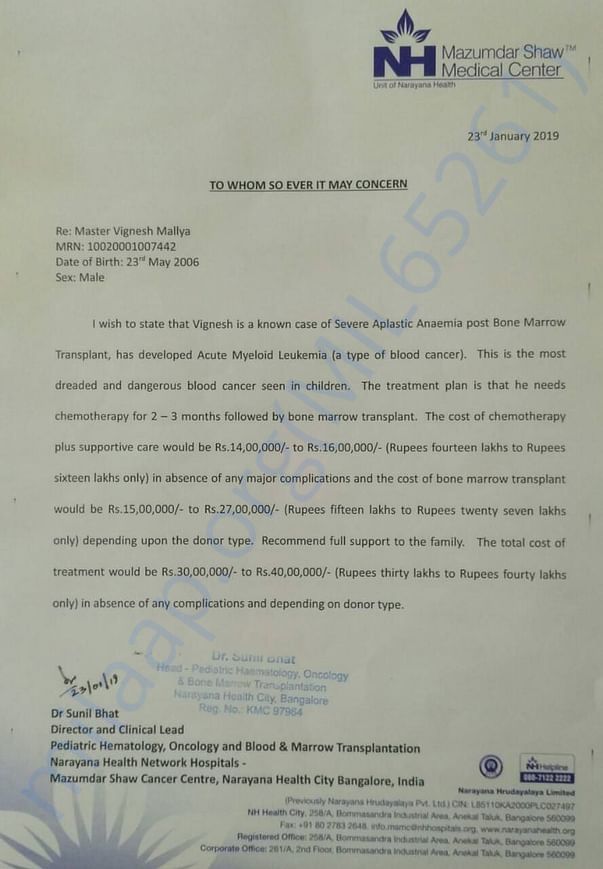 UPI: rzpy.givetomlpvigneshm004@hdfcbank (Copy to clipboard)
Or
Click here to read the instructions before you make a bank transfer.

Vignesh has recovered well and he is happy at home. He is thankful to all the donors who have supported him. Thank you! Here is a recent picture of him:

Vignesh has completed his Chemotherapy and Bone Marrow Transplant. He is recovering an dis responding well to his treatment.

Vignesh I wish you all the happiness in the world

Vignesh I wish you all the happiness in the world

You are sending a message to
Nikita Ramakant Shinde
Go back 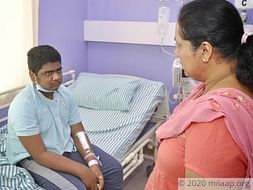 This Young Boy's Blood Disease Has Turned Into Deadly Cancer