I Need Help Fighting Cancer And Staying Alive For My Family | Milaap
This campaign has stopped and can no longer accept donations.

I Need Help Fighting Cancer And Staying Alive For My Family 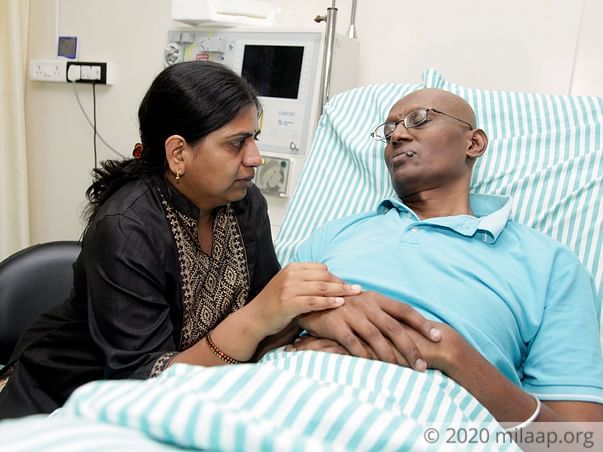 At the age of 42, I used to take very good care of my health. Every weekend, I went for either jogging or swimming with my daughter Varsha. But even that did not prevent me from falling so sick. My daughter keeps asking her mother when I will come back. Going jogging or swimming every weekend was our special time together. I try to keep her away from me so she doesn’t somehow catch my sickness. She feels sad that her father is pushing her away.

Three years ago, I was content with my life with my wife, Sridevi, my daughter, and my parents. I had a modest income to support my family. Our life turned topsy-turvy when I went to the doctor because I felt I was tired.

There was vigorous coughing and sweating and my family wanted me to get checked by a doctor. The doctors saw a big drop in the WBC. They also found slight infection in the lungs.

Doctors suggested I get admitted in a hospital. It was very difficult to find out what was wrong with me. After carrying out tests for a week, they told me I had severe blood cancer. I was shaken from within. More than death what I feared was my family ending up on streets if I didn’t live.

My parents and wife were shattered but I knew I had to fight back. Doctors said I had high-risk cancer. I started my chemotherapy. After a year of treatment, doctors said that I was fine and cancer-free. But after the harsh treatment, my bones were so weak, I could barely stand. My body had not even recovered from the chemotherapy effects when I had to undergo an operation for bone restoration.

The relapse was worse than I could handle

Two years after the operation, I started having severe leg pain and headaches. Visit to the doctor again took away the ground from beneath my foot. My WBC count had risen to 137 (normal range - 4-10). My cancer came back haunting me.

I was admitted immediately to the hospital and was given high-level chemotherapy. After a few days, tests revealed that my kidneys were failing. Due to the aggressive chemo, there were chemicals choking my kidneys.

Chemotherapy was stopped for a few days to clear the kidneys. Three days before restarting the treatment, doctors observed that my WBC had alarmingly dropped to 100 (normal range - 5,000-10,000).

I started getting admitted to the hospital more frequently. My work took a backseat. I tried to continue working from home. My salary was reduced and I started having a tough time maintaining my family. I wasn’t paid for the times that I couldn’t work.

My daughter is just in the second standard. She misses me too much. But more importantly, I am missing out on important years of her life. All the times, I return from the hospital, it seems that she has grown up in my absence.

After a gap of 6 years, Sridevi started working again. I tell her that I might not live. She has to take care of herself and our daughter. She sometimes just wants to quit her job and take care of me. She is too worried but never says anything.

I have seen the darkest side of life

It’s difficult when I am kept away from people in the private ward. I want to be around people in the general ward who are struggling with cancer. Seeing people struggle gives me a greater urge to live - I feel less alone.

So what if my cancer has relapsed? I am determined never to give up. My wife gets a little hope when she sees my confidence. I tell my family that I can die of any disease, but I refuse to surrender to cancer.

This is my last chance to live. Only a bone-marrow transplant can help me live now. I want to live so that I can return all the help that I am getting now. If I live, I will quit my job and work towards giving mental stability to those who think they are dying.

In the last 3 years, I have spent Rs 20 lakhs. Last time, when I was admitted to the hospital I spent Rs 7 lakh in a month. I have used up everything that I had. My friends have helped me a lot and now even they don’t have money.

A bone-marrow transplant is the only answer to beat cancer. But the cost required to win over cancer is Rs 15 lakhs. I have no money now to live.

Your support can save Lakshmikanth
Estimation letter 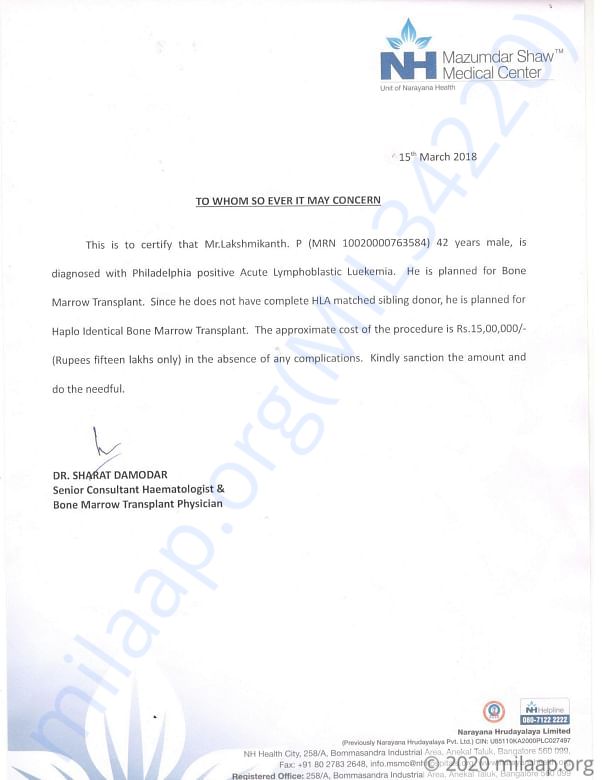 We have some unfortunate news to share with you all. We regret to inform you that Lakshmikanth is no more with us. Despite the transplantation, he could not recover. We pray for his soul to rest in peace.

All the funds raised have been utilized towards his medical expenses.

Thanks for your love and support. This couldn't have been possible without you.

It gives us immense pleasure in informing you all that Lakshmikanth is currently hospitalized and successfully underwent the transplant on the 20th of May'18.

He is recovering and we are all hopeful about his health. Thank you everyone. Shall keep you posted.
Dear Supporters,

Thank you for the wonderful love and support that you have shown towards my fundraising campaign on Milaap. I am doing better now compared to earlier.

I have successfully completed all the prescribed chemotherapy cycles. I had side effects initially but otherwise, my overall response to the treatment has been positive. I am currently undergoing radiotherapy.

The doctors suggest that by Monday I can undergo the bone marrow transplant procedure. My daughter is a match and she will be donating a part of her bone marrow to me. She has been advised to visit the hospital on Friday and Saturday to do the initial tests and extract the bone marrow that will be transplanted to me.

Thank you for the wonderful support. Please do pray for my health and speedy recovery. Will keep you posted.

Donated to this campaign via Bank transfer/QR Code? Click here if you can’t find your donation listed below.
R
Rachna donated Rs.10,000

Donated to this campaign via Bank transfer/QR Code? Click here if you can’t find your donation listed below.
R
Rachna donated Rs.10,000 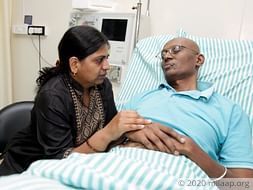 I Need Help Fighting Cancer And Staying Alive For My Family