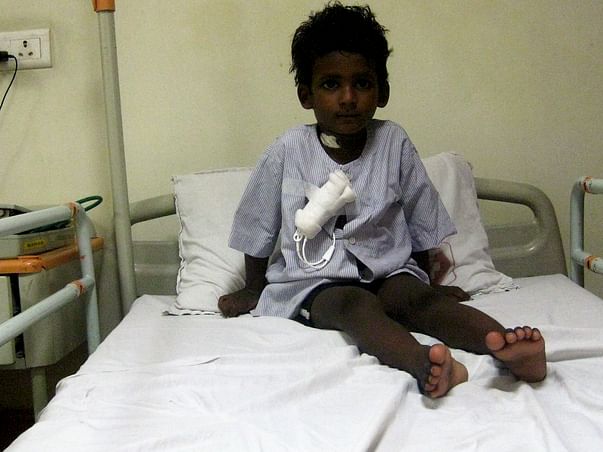 When Kavinesh was born, his parents were extremely happy that their second child was also born healthy. Little did they know that their nightmares would begin soon. When Kavinesh was 10-months-old he was diagnosed to have a rare blood disorder. He has spent much of his life in hospital since the diagnosis. The only curative option is a bone marrow transplant. Unfortunately, the family cannot afford the treatment.
The disease leaves him with higher  risk of infections and uncontrolled bleeding

Kavinesh hasn’t had the easiest start in life. When he was 10-months–old he had high fever and vomiting. They had to visit several hospitals before the diagnosis which almost depleted their resources. They were totally shattered when the tests confirmed that he has aplastic anemia, a rare blood disorder meaning his body stops producing enough new blood cells and it leaves one feeling fatigued and with a higher risk of infections and uncontrolled bleeding.

Little Kavinesh has gone through immense pain, a series of hospital admissions, blood transfusions, and daily medications. Despite the hardship, the little boy’s spirit remains as strong as ever and this makes the parents hope that he will overcome this terrible disease and live a normal life.

Bone marrow transplant is the only solution to save his life

“Sometimes he becomes so weak and starts bleeding, for a moment my body would tremble and I’ll have nothing to hold on. Ill rush to hospital, after the blood transfusions he would smile as if nothing had happened, only then I’ll begin to breathe” says Veeraselvi

Father has exhausted all his sources and now struggling to continue the treatment
For the past 2 years, he has been given blood transfusions every month. Recently, his condition became very critical and doctors insisted that only a Bone Marrow Transplant can save his life. Fortunately his brother Raj Karan, who is 6–years–old is a 100% matched donor.  He has a very little time on hand and has already exhausted all his savings. However, he is determined to save his son from this dreaded disease.

“I don’t really understand what the disease is but all I know is that it is a life-threatening disease. He cannot even express his pain. I have no strength to see him at all, he smiles at me, he believes that I’ll be with him every time. My first son can save his life by being a donor. I’ feel ashamed that I’m not able to help him at this crucial time” says Ramarajan

He needs a bone marrow transplant at the earliest

How can you help
Ramarajan is a daily wage worker and he earns only Rs 250 per day, with that meager amount he has to take care of the family and the treatment. He has borrowed from his relatives and friends. Transplantation would require Rs 12 lakhs which he cannot afford. He cannot even imagine raising such an amount.

Your generous support and contribution would save Kavinesh and give him a chance at a normal life. 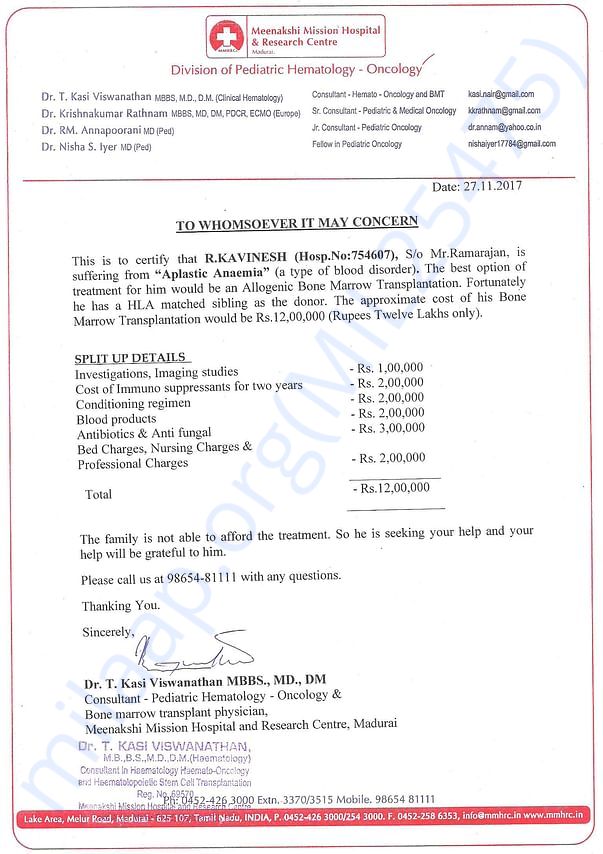 Scan & donate with any app
check_circle_outline Download payment receipt
Report fundraiser
Know someone in need of funds for a medical emergency? Refer to us
Rs.37,920 raised

Donated to this campaign via Bank transfer/QR Code? Click here if you can’t find your donation listed below.
N
Naina donated Rs.500

Donated to this campaign via Bank transfer/QR Code? Click here if you can’t find your donation listed below.
N
Naina donated Rs.500

S
You are sending a message to
Sathya
Go back 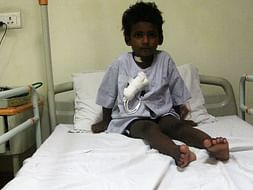