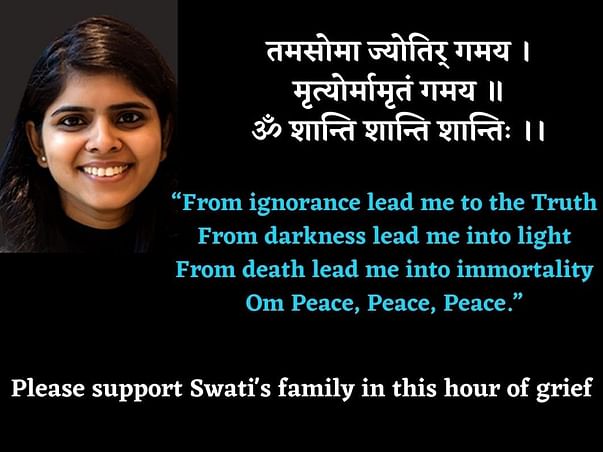 Share
Our dear friend, Swati Sharma, was allegedly reported hanging at her husband's house in New Delhi, India, on 19th Jan 2021. This happened in less than 1.25 years since her marriage. Her husband, Harsh Vardhan Tripathi, was present at home during that time and informed us about the sudden demise of Swati over the phone. Harsh & his family offered a contractual agreement to settle the case in lieu of money that we refused. His family allegedly made arrangements with police preventing the filing of FIR and post-mortem. After a lot of pressure from Swati's colleagues, post-mortem was finally conducted on 22nd Jan 2021. Swati's funeral, held on 22nd Jan 2021, was devoid of her husband and her in-laws. FIR was filed on 25th Jan 2021 and Harsh was released on bail on 26th Jan 2021. So far, police have shown extreme negligence in investigation and collecting any evidence. Swati's and Harsh's phones have also been accessed recently, which raises further suspicion of evidence tampering.
Everyone who knew Swati clearly knows that she was a fun loving, sincere, independent and self-made strong woman working at Google Singapore. Her father had passed away when she was a kid and her mother passed away in 2016, leaving her alone with her 2 siblings. She got married to Harsh Vardhan Tripathi in Nov 2019. After the wedding, Harsh moved to Singapore to be with her with the promise to find a job over there. However, Harsh has been on sabbatical leave ever since then and Swati had been bearing all the expenses. Swati was constantly pressed to buy property, expensive gifts etc. before and after the marriage. Being a person she was, she never cared about the money and happily did all of that without making any fuss. However, soon after the marriage, her husband along with her in-laws started to abuse her both mentally and physically.
As if that was not enough, Harsh flew back to India in Sep 2020 leaving Swati alone in Singapore. He mentally harassed her by refusing to return to Singapore and threatening to divorce her. Swati immediately flew back to India to save her marriage despite Covid-19 restrictions. Swati went to Manali along with her husband for a month in the hope to rekindle their relationship. And then,  on 19th Jan 2021, her own husband reported her dead hanging to the ceiling.
Given the unusual circumstances that led to Swati's demise, we would like to investigate the case and seek justice for Swati. She didn't deserve this, but deserved a much better much happier life. Please help us in this situation so that justice can be served to Swati. We never thought this would happen to her, but this is life and we need to accept the order of God. Least we can do is bring justice to Swati. Hence, I, on behalf of Swati and her siblings, her friends, her colleagues and all the loved ones, request you with the folded hands to donate generously to this fund and pray to the Almighty to let her soul rest in peace.
We pray to God to give us strength to give back to humanity whatever we have in terms of our blessings, service, teaching and research.