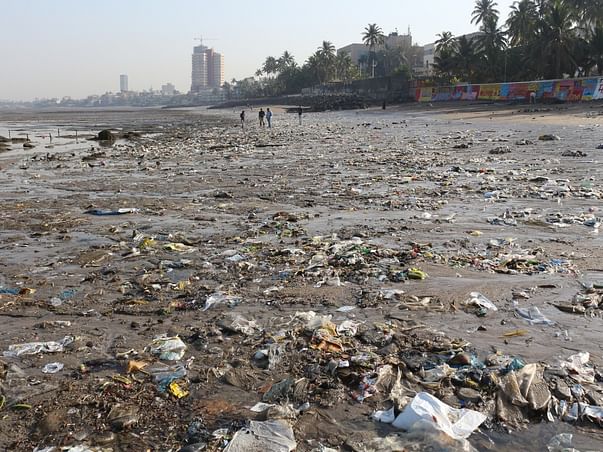 Share
“Clean our oceans” campaign
Plastic is an avoidable externality. In the last seven decades 8.3 billion tonnes of plastic have been produced. A single plastic bottle takes around 450 – 1000-years to decompose. 50% of the plastic produced is single-use plastic. 5 trillion plastic bags are used every year. In India, 80 % of total plastic consumption is discarded as waste and official statistics say the country generates 25, 940 tonnes of plastic waste daily. At least 40% of this waste is uncollected.
The Global Garbage Bin
Water the most essential fluid on which life is dependent has become a global garbage bin.  According to the recent study, an estimate of 90% of plastic ends up in our ocean. The annual input of plastic into the ocean is estimated to rise by 17 million tonnes by 2025. Today the world’s plastic problem is bigger than the ocean. The plastic debris kills an estimated 100, 00 marine animals annually. At current rate the plastic is expected to outweigh all the marine life by 2050.
Our work:
We started our program of ridding oceans and hence beaches of plastic from Dadar beach over two years ago. Consistently, week after week cleaning drives were undertaken to remove all the plastic waste thrown by the sea on the beaches. Over 2000 tonnes of plastic waste was removed. Our house to house plastic collection drive helped us remove plastic from homes before it found its way to the ocean or to dumping grounds.  The problem is however huge and while these cleaning drives would continue it has now become mandatory to build capacity of all other stakeholders to make the entire campaign more sustainable.
We currently work with MCGM who picks up waste removed by us from beaches and unfortunately sends it to dumping grounds.
Our Agenda:
Breaking the vicious cycle of sending all waste to the dumping grounds and adding to the already burgeoning menace. We are raising money to create a separate supply chain where plastic collected  from oceans and homes will be sorted, segregated and sent for scientific disposal. This will make the campaign more sustainable. We need all like-minded ocean and nature lovers to come together and contribute generously to making this campaign a success. Help us nip this plastic waste problem in the bud and create a better world for us and for our children.
Our Appeal:  In the first phase we wish to raise Rs. 1,00,000/- to ensure scientific disposal of all plastic waste collected. Money raised will be spent on putting in place a system for this which would include capacity building of personnel involved in clean ups and collection and on fuelling the vehicles needed for the process. Every single rupee contributed will help us save our oceans and make our beaches better and cleaner.
Follow our campaign on FB :
For contribution in kind and becoming part of our mission, do write to us.

Donate
4 supporters
5%
Raised
Rs.5,250
of Rs.100,000
Only INR donations accepted towards this cause
Card, Netbanking, Cheque pickups
Or Donate using