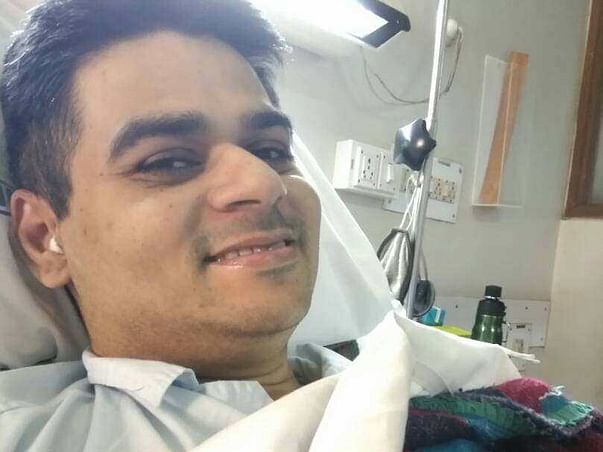 Share
This is Jason. Husband, brother, son, loyal friend and all-around amazing human being. He is cheerful, loving, unbelievably strong and always puts his friends and family first. If you know Jason, you know the amount of heart, compassion, and humor he possesses—and how much of a light he is for all who know him. To this 38 year old, no one is a stranger but just friends in the making.

6 months after our wedding in 2015, Jason started having stomach pain. Several rounds to local doctors over a span of 5 months led to misdiagnosis and treatment for infections. When the pain worsened, weight started dropping,  was unable to pass motions and blood being visible in urine, we visited a specialist who immediately advised a colonoscopy.

We got the results of the biopsy of a mass found during colonoscopy on our first wedding anniversary. The verdict: stage 3 colon cancer. It shook us to the core. He was scheduled for immediate surgery and then underwent 12 rounds of chemotherapy, which ended in Jan 2017.  A blood test after this showed that he had beaten it.

Imagine our horror when a month later, he had to be admitted to the hospital due to intestine obstruction during which a Pet CT scan was done. It showed that the cancer was back in several more places. Since then it has spread very aggressively and rapidly metastasizing in his stomach and pelvic area. He is now stage 4.

But Jason is a fighter and refuses to admit defeat. In the face of terrible pain and multiple treatments he has remained strong. He had been advised chemotherapy along with targeted therapy to address the cancer. However the latter is very expensive and beyond our means. He needs 8 lakhs just for the targeted therapy for 6 months of this treatment

If you are able, please consider making a donation to help lighten the financial load and cover any extra expenses the months ahead may bring. Money aside, your love, support and prayers are needed and appreciated most of all.

We appreciate any donation. No amount is too small, and every contribution will be used only for Jason's treatment and recovery.

Thank you for your love and generosity.  If you are not able to donate, your prayers are desperately needed & warmly appreciated!