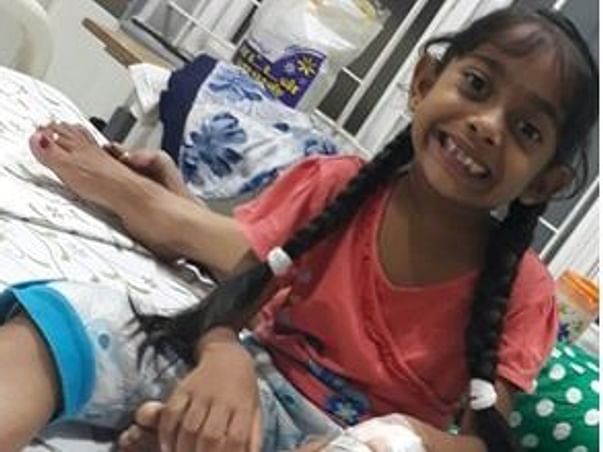 Share
When my husband shut my shop down and threw me onto the streets with both my daughters, I thought that was the end of life, but then I realized I need to live for them, and give them a better future. I had to educate them well. That would be the greatest asset!”
Manjula is a single mother with incredible courage. She overcame her helplessness and became independent, sending her daughters Lekhika (17) and Veditha (8) to good schools. While the three were slowly beginning their new life, Manjula’s younger daughter Veditha was suddenly diagnosed with a kidney failure. Now, the single mother’s life threatens to fall apart if she is unable to arrange funds for her daughter’s transplant

It was a sudden, unusual fever.

8-year-old Veditha suddenly developed a terrible fever. When the fever did not subside in 2 days, Manjula took her to a doctor. She was told it was a urinary tract infection (UTI) and given medicines. Seeing no result still, she took her daughter to the hospital. The doctors were shocked when they saw the intensity of the infection. Veditha was admitted to the hospital to be kept under observation. The diagnosis shocked Manjula.

The little girl’s kidneys had failed. In fact, her only functioning kidney was at less than 20%. The diagnosis was the greatest shock for the family.
“I would have known if there was any other symptom. I bathe and dress her everyday,” Manjula is still bewildered she had no idea her daughter had been living with a threat to her life all along.
The only way Veditha could now survive was with an urgent kidney transplant. Manjula has been found to be a match, but the procedure would cost them around 6 Lakh, an amount too big for the single mother who has just started her life over.

With a little support from everyone, it should not be very difficult.

Manjula has already raised a little over Rs. 3 Lakh with the support of friends, family and colleagues. Little Veditha is gentle, but brave. She does not know what an operation really is, but keeps telling her mother she will be fine very soon. The mother is now struggling to collect only the final Rs. 1.8 Lakh. If she gets it on time, she can save her daughter’s life.
Your contribution can help this single mother save her daughter's life!