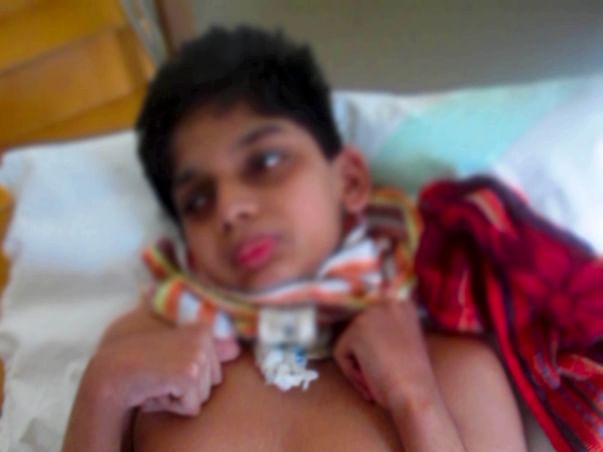 Phanindra was suffering from fever and throat infection when he was admitted in the hospital, the doctor suspected it would be diphtheria and he underwent tests. Before the reports arrived, he was given wrong treatment with heavy dosage of 9 injections, his condition became serious since his blood got poisoned and kidneys failed. In an emergency at midnight, he was sent to KIMS Hospital and there he got dialysis for five times. They cured him and sent him home.

After 10 days at home he started vomiting regularly and we took assistance from a doctor who suggested a capsule. After he swallowed he was unconscious and admitted in hospital, vomit reached his lungs. Doctors cleaned and did trichotomy but at that time his food pipe was damaged and arranged a pipe through nose for his feeding and oxygen through throat, The pipe became so small for him as he could not breath. The doctor made his throat operated and arranged a big pipe for oxygen without any anaesthesia.

He went into a coma and there was no oxygen going to his brain, patches had formed and 40% brain got damaged.Therefore we took him to CMC Vellore for his treatment.  It will take about 3 to 4 months. The doctors haven't informed that any surgery will be made, if at all they do any surgery, we are not in a stage to pay that amount.

We are requesting you for financial help. Every 3 months now, 10 days of Stem cell therapy treatment undergoing in Mumbai.

So far two sittings are completed and more 6 to follow. Next appointment date is December 6th,2016. Every Month his medical expenditure is around 40,000/- ( Food , Medicines and physiotherapy ).

Phanindra is recovering very well. Now we are planning to take him to 5th Sitting of stem cell therapy at Mumbai Hospital in Sept 1st week.

Thank you for the wonderful support all of you have shown.
Donate

You are sending a message to
kishore kumar
Go back 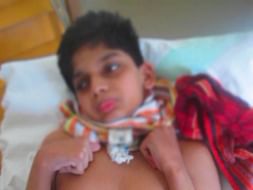