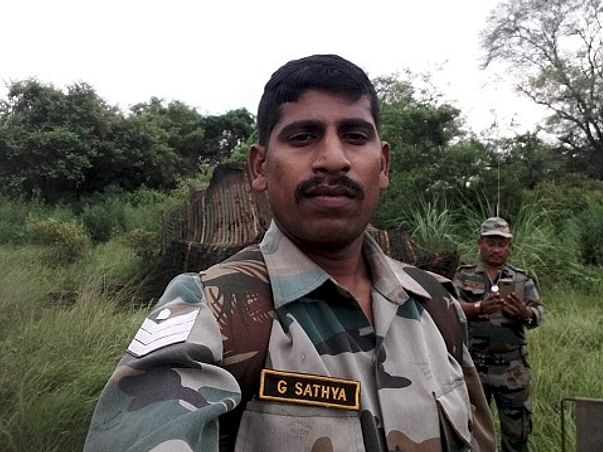 It is time to protect him, who has protected our country's borders for close to 2 decades.

Satyanarayana. G, a 36 year old ex Indian Army Serviceman is in dire need of funds to get an urgent heart transplant.
Ranked as a Havildar, he joined the Indian Army and served the military for a long span of 18 years and has contributed to some of the major victories of India. A young dad of 2 kids, Satyanarayan religiously devoted himself to the service of the nation.
Unfortunately, life took a turn for the worse when he was diagnosed with Dilated Cardiomyopathy, a critical heart disease. For 6 years, he has been suffering with this disease and had to reluctantly quit his service.
When he was diagnosed with DCMP (DILATED CARDIOMYOPATHY), the doctors believed that he could be treated through medication. However, another twist that turned the life of his family upside down was the cardiac arrest he underwent, earlier in the year. He was immediately brought in to the ICCU and was treated for 15 days rigorously  by the doctors. The doctor, however, suggested to go for ICD (Implantable Cardioverter Defibrillator) and successfully implanted the ICD. Yet, there was no improvement. His health only deteriorated with time, and the doctors have finally asked us to go ahead with a Heart Transplant, which was the only way to save Satyanarayan. After a long struggle, we have finally found a donor who matches with the needs of Satyanarayan.

The family has been able to gather partial funds out of the 20 Lakh requirement. Though he is an Ex-Serviceman, and has a medical insurance, the ECHS (Ex-Servicemen Contributory Health Scheme), the insurance does not cover organ transplants and therefore, we are looking for some support from all of you. He has been admitted to the hospital and is going to undergo a transplant in a few hours. Post the transplant, Satyanarayan will have to be admitted to the hospital for at least the next 15 days in order to recover.
It is time, we pay back to our Jawan. It is time that we come together and serve our real hero who has done nothing but serve India, selflessly. Please come forward and donate for the campaign. We must stand for Satyanarayan, at this time of need.

Come together and donate! 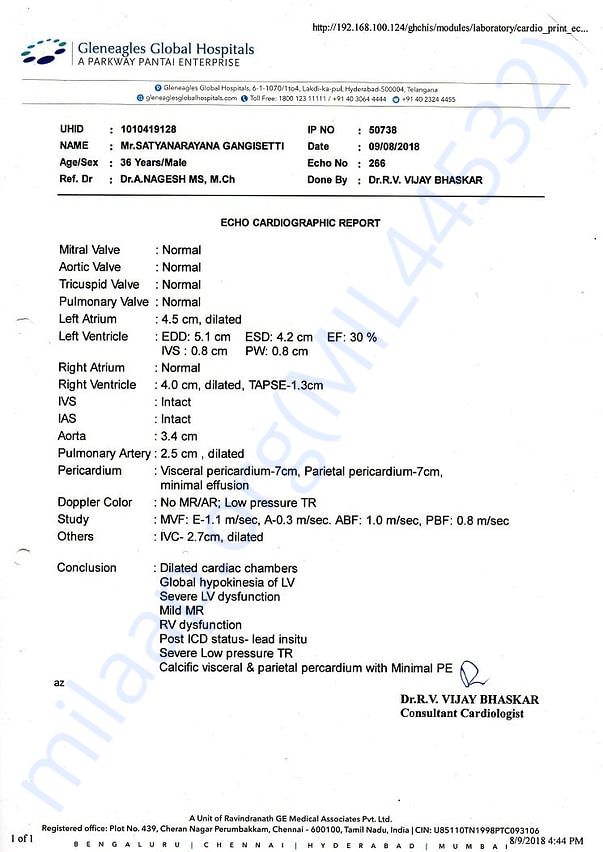 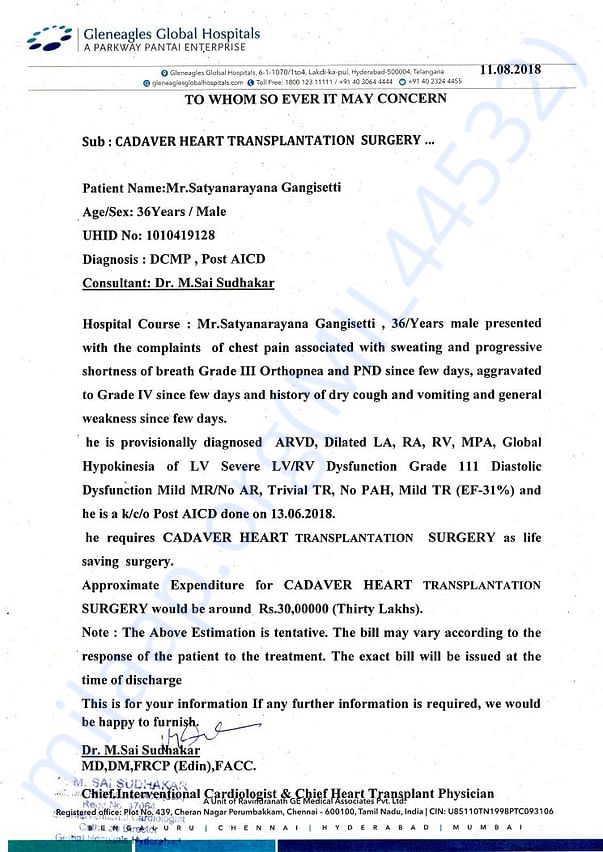 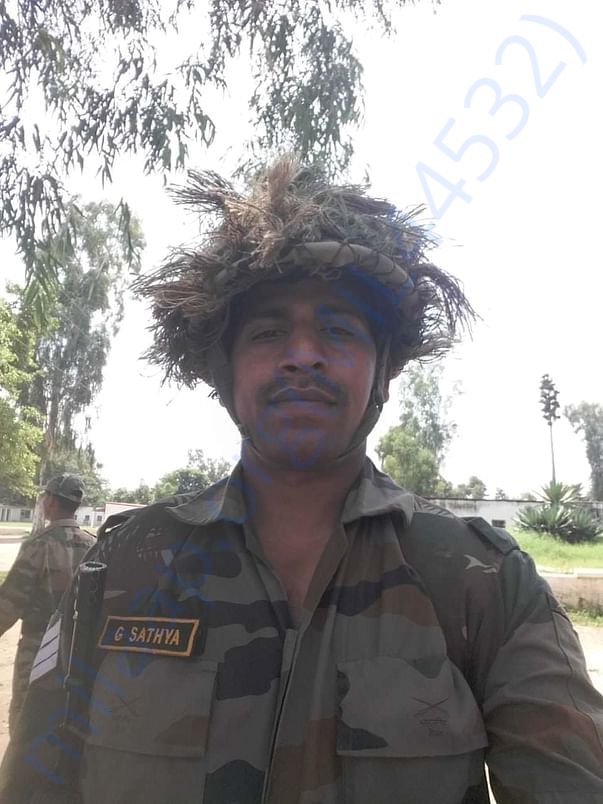 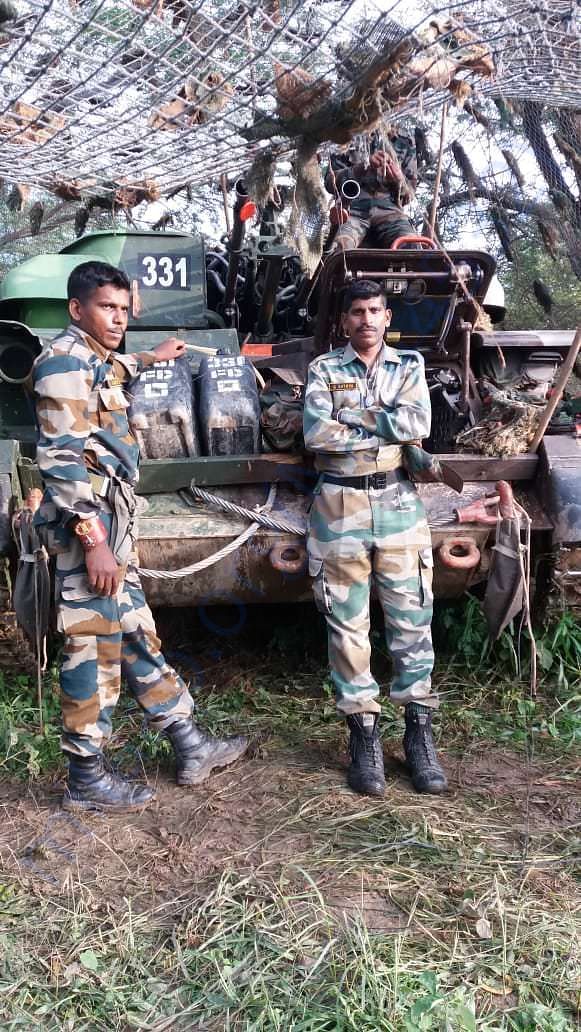 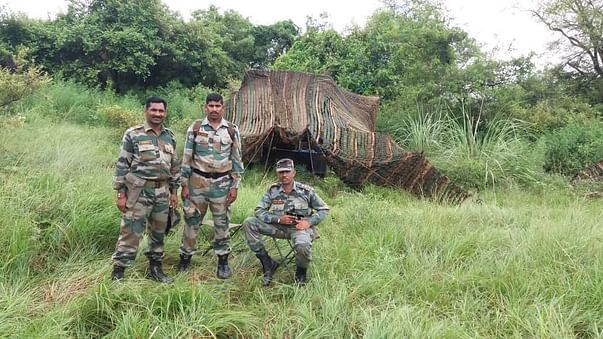 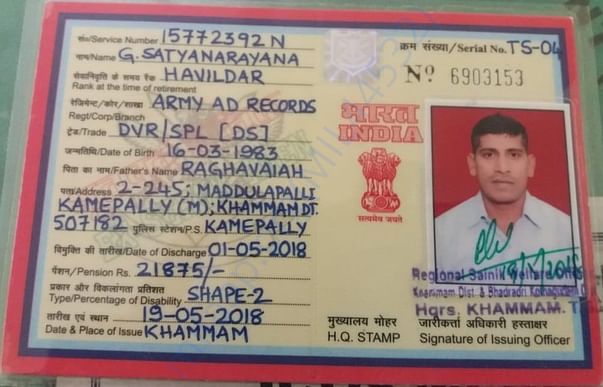 Satyanarayana is almost completely cured and he is taking some minor medicines and following up with the doctor. Here is his latest picture.

It gives me great pleasure to share this good news with you.

Satyanarayan is doing great. He was discharged and is at home now. His health is perfect. There were no complications after the surgery.

He goes for regular check-ups, once in every 10 days. He went for a check up a week ago.

We are all very happy for him and we are extremely grateful to all of you for making this possible. Thank you all so much.

Thank you for the love and support. Here is a quick update on Satyanarayana's health.

He successfully underwent the surgery and is currently at the hospital. There are no post-surgery complications and he is recovering well.

As per the doctors, he needs a ten days rest at the hospital before he can go home to ensure there are not even minor complication.

Thank you once again for your generous contributions.
Regards,
Raja
Donate

Scan & donate with any app
check_circle_outline Download payment receipt
Report fundraiser
Know someone in need of funds for a medical emergency? Refer to us
Rs.195,843 raised

Donated to this campaign via Bank transfer/QR Code? Click here if you can’t find your donation listed below.
Bm
Balavenkatesh donated $27.34

Pray for the well being of this brave soul !

Donated to this campaign via Bank transfer/QR Code? Click here if you can’t find your donation listed below.
Bm
Balavenkatesh donated $27.34

Pray for the well being of this brave soul ! 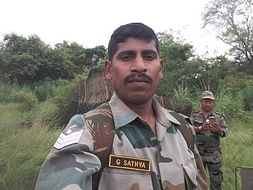