Death Penalty Research Project,'s online fundraiser for Human Rights | Milaap
This campaign has stopped and can no longer accept donations.
11 years in prison-8 years on death row-A family's struggle for survival. Support Adambhai and his family to rebuild their lives after his acquittal.
play_circle_filled 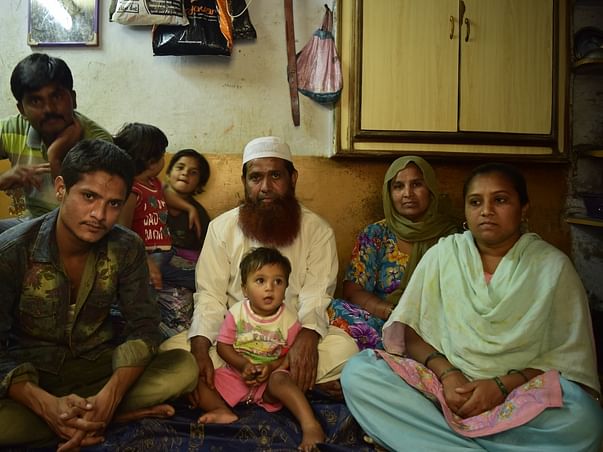 Adam Suleiman Ajmeri lives with his family of seven, consisting of his wife and six children in Ahmedabad, Gujarat. Twelve years ago, he was an auto driver plying in the streets of Ahmedabad. He is presently unemployed, his family subsists on a meager 5000 rupees per month.

Adambhai's arrest and hardships faced by the family

In August 2003, eleven months after the Akshardham Temple Terrorist attack, Adambhai was arrested as an accused in the case. He was illegally detained for close to a month and tortured in a heinous and excruciating manner.

At the time of his arrest, Adambhai’s wife, Naseem, was pregnant with their sixth child. His eldest son, Mohammad Almas, discontinued his studies soon after the arrest, and later set up a small sewing unit.  Adambhai's wife worked as a domestic help, and his elder daughters were forced to quit school to attend to household chores in their mother’s absence. Adambhai’s son, Almas, is now the sole earning member of the family, earning around Rs. 5000 a month providing for 7 members of the family.

In 2006, a special court convicted him and sentenced him to death, and the death sentence was confirmed by the High Court in 2010. Having lost all hope for justice, Adambhai waited helplessly while his appeal was being heard by the Supreme Court of India. 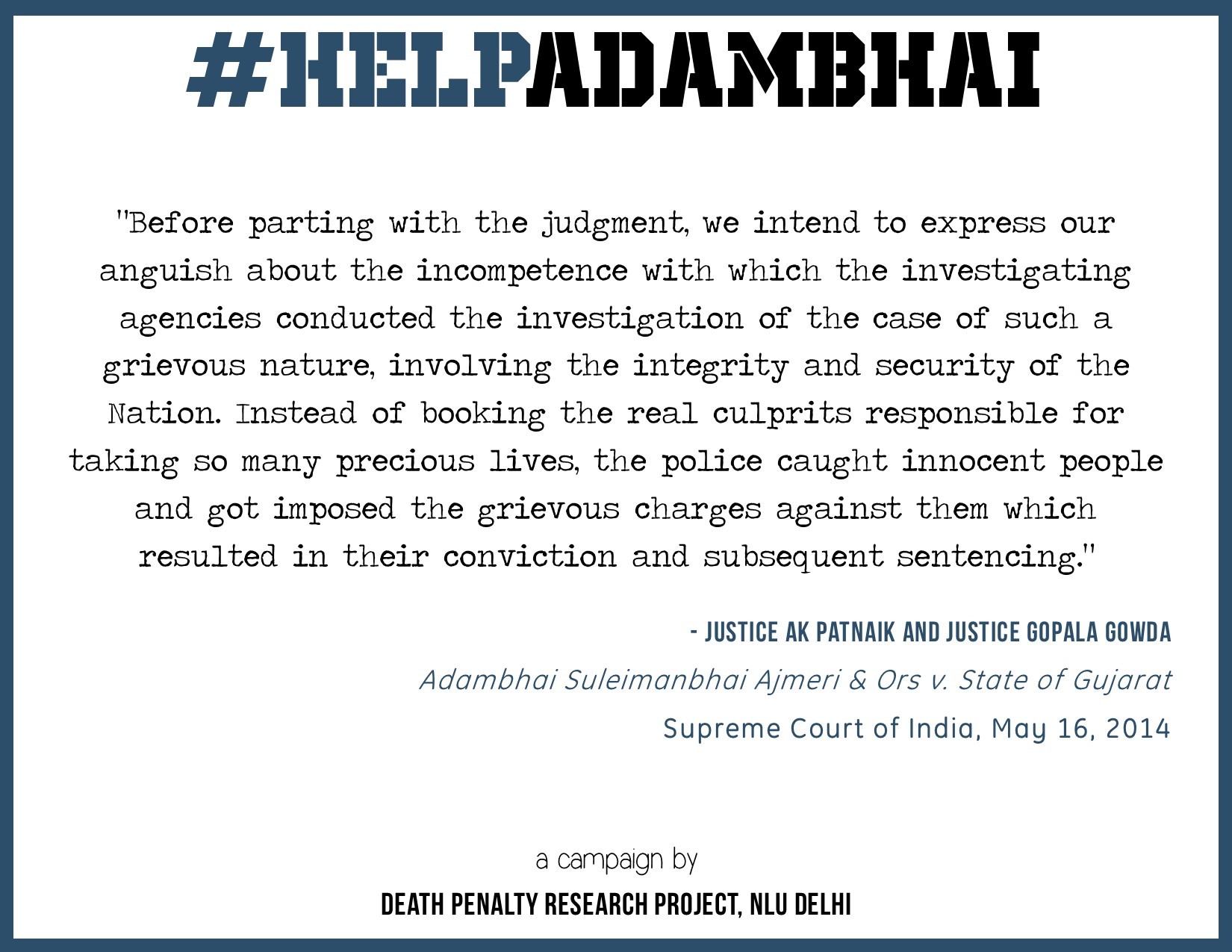 In May 2014, after Adambhai had spent eleven years in prison and eight years on death row, the Supreme Court of India exonerated him of all charges, expressing  “anguish about the incompetence with which the investigating agencies conducted the investigation of the case… Instead of booking the real culprits responsible for taking so many precious lives, the police caught innocent people and got imposed the grievous charges against them.”

Although Adambhai was free to return, he was overwhelmed by the changes that had transformed his city in the past eleven years. In this time, gadgets such as mobile phones had acquired ubiquity, leaving Adambhai unable to grapple with the mundane realities of daily existence. Adambhai was struck by the hardship borne by his family in his absence, and overcome with sorrow for his inability to take care of his wife and children.

Grim memories are woven into Adambhai’s past, proffering neither solace nor escape, and the future does not seem to hold in its uncertainty the promise of a better life. He does not have the means to eke out even a meager living, much less the ability to reconstruct his life from the shattered remains of what is left of his past. Let us help Adambhai start afresh. 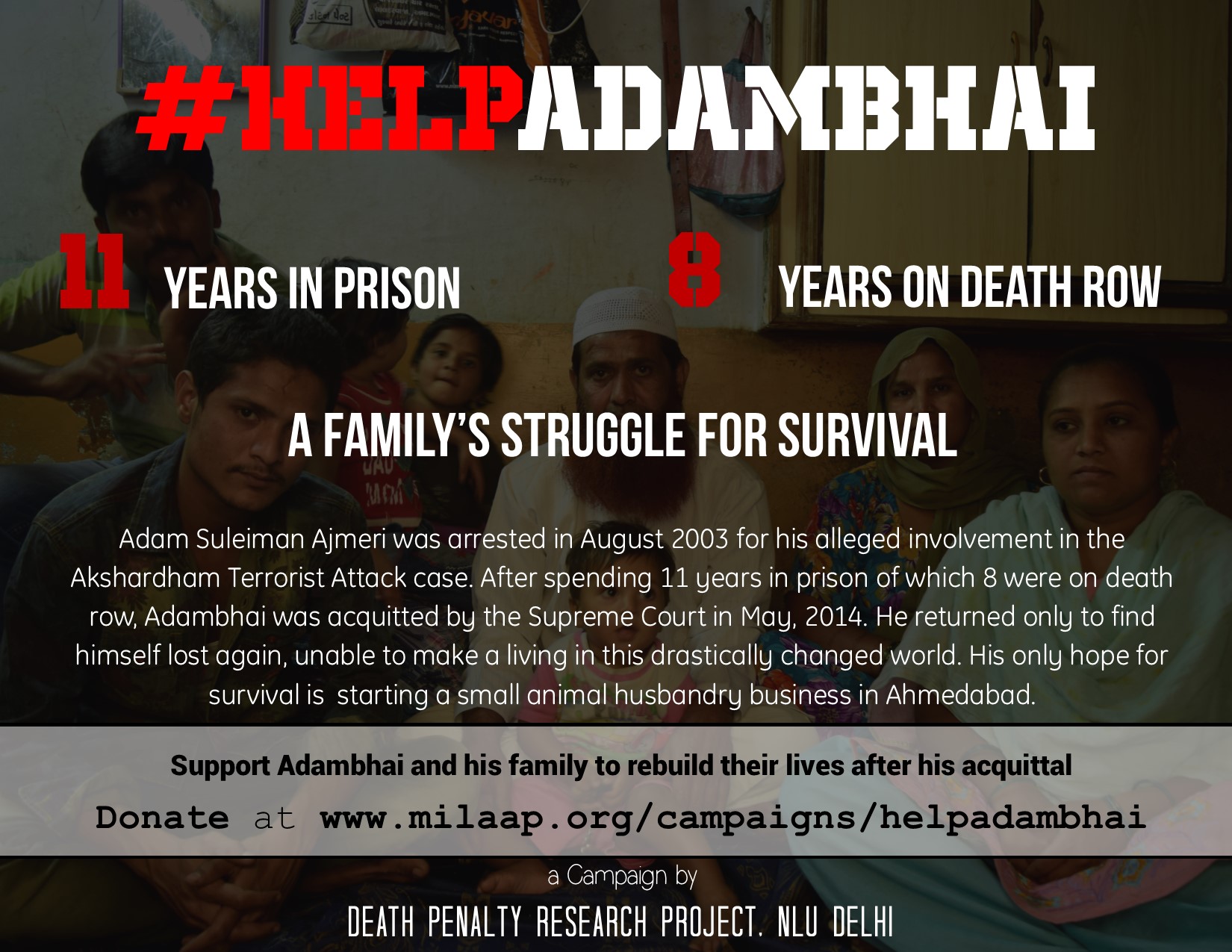 How will your contribution be used

Adambhai plans to set up a small dairy farm to earn his livelihood. He plans to rent a small area of land on the outskirts of Ahmedabad, and to rear goats and cows to sell milk and local milk products. To start this enterprise, Adambhai requires initial capital to the tune of Rs. 7,00,000 (seven lakh rupees) to set up his dairy farm.

Your contribution towards setting up Adambhai’s business will help sustain him and his family. Support Adambhai and his family to rebuild their lives and reclaim their lost years. Please donate.

You can also show your support by sharing his story. 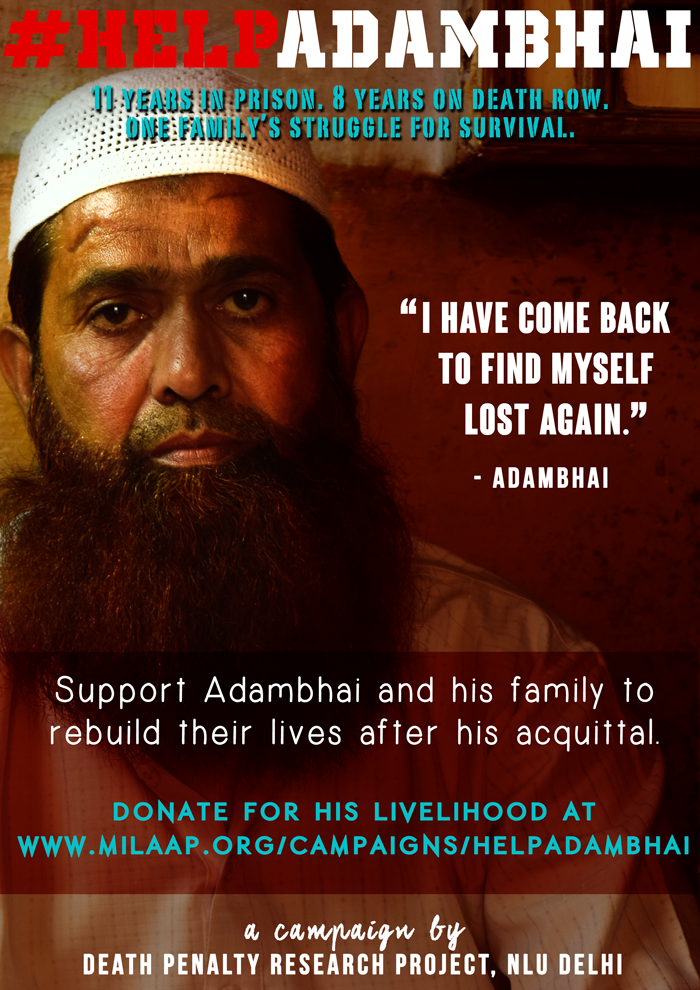 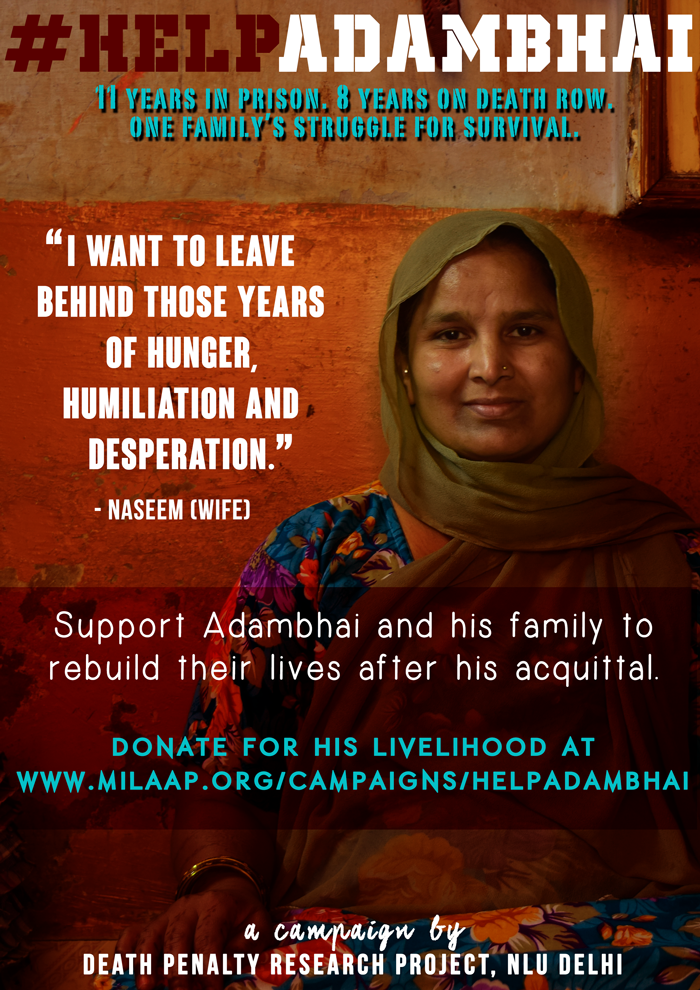 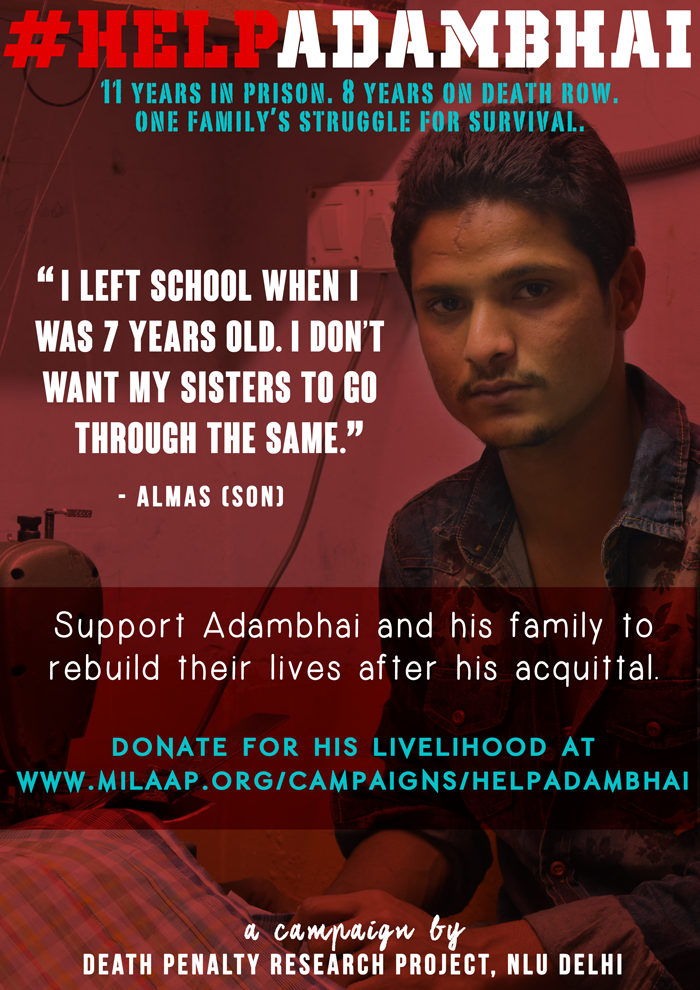 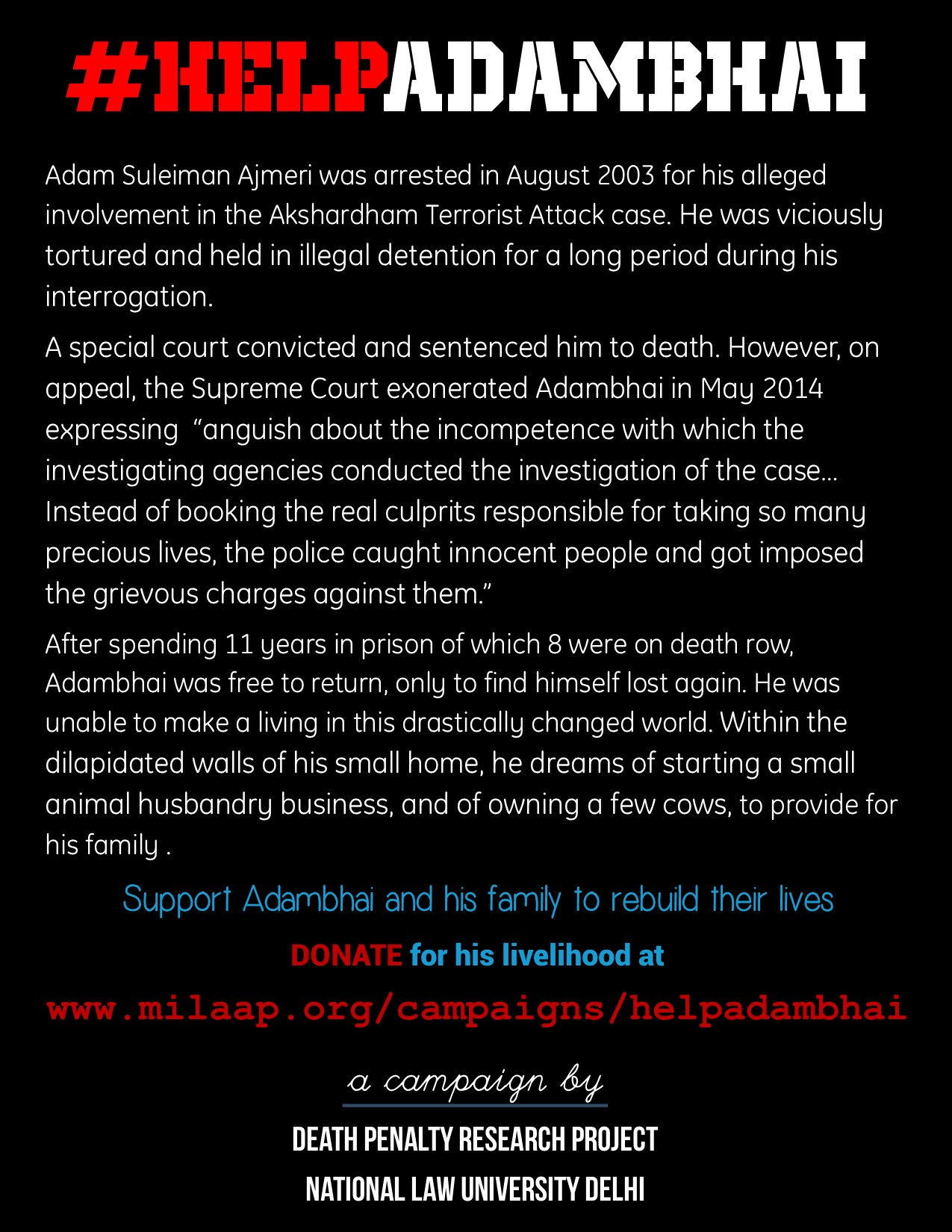