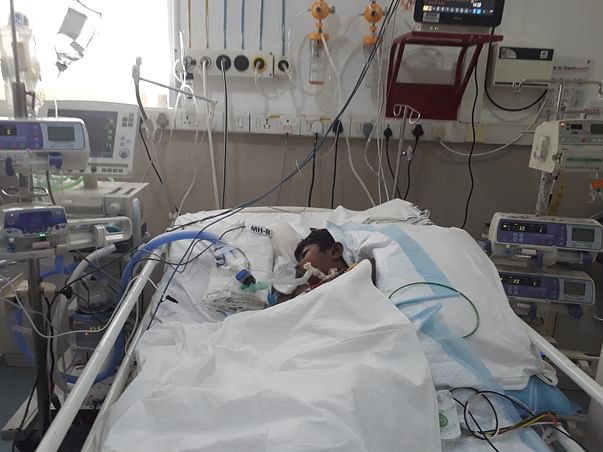 Share
Appa, why are you crying? I always pray to god that pain should never touch your life, let him give me how much pain and sorrow he want. "- these are the words of 11 years Varshith who is suffering from acute dengue and multi organ failure

Varshith is the most kind-hearted young child we will come across. He gets deeply moved seeing poor people suffering on the road. He never quarrels with friends. Sometimes even if two friends are fighting in school he would go up to them and ask them to stop the fight. Little did his family realize that the little boy who cannot bear the pain of others have to suffer so much pain.

A light fever turned into a multi organ failure and slowly taking away the life of Varshith
On 27th July 2017, Varshith was down with fever, his father had taken him to a local hospital where he was given paracetamol and sent home thinking it was nothing but a viral fever. Varshith condition continued to deteriorate and he fell unconscious. He was taken to another hospital and a blood test report revealed he is suffering from Dengue which has led to multiple organ failures.
Varshith is from a village near Kolar where the treatment facilities are not so advanced. His parents had no options but to bring him to Bangalore on 31st July. It’s been more than a month that Varshit is suffering every day in the PICU and his parents are helplessly watching him fighting for life every single day. For over a month the waiting room of the hospital has become the new home for the family. The whole day they stay in the hospital praying for Varshit to get better.

Varshith’s condition is improving but needs Rs.20Lakhs to continue his treatment

Varshith’s condition is slowly improving with time, now his kidney and liver condition has improved from before. If the treatment continues he will recover soon. But the family is finding it very difficult to cope with the medical expenses.

Varshith’s father is a teacher in a private school with a monthly income of Rs.9000. He has taken a loan 13lakhs which already spent in the expenses so far. He has exhausted all his savings. Now he has no source left which can be used to manage the expenses.All his school friends and teachers are praying for him. Everyone has come forward to help him as much as possible but it is not adding up to the amount needed for his treatment.
Varshith is recovering but it will be of no use if the treatment is not continued

Varshith has started gaining consciousness, recently he is even trying to speak. The doctors have told them that Varshith is responding well to the treatment. But the family needs Rs.20 Lakhs to continue with his treatment.

Varshith needs your help for his treatment to get back a healthy life. His parents can in no way manage to continue such an expensive treatment. His father can never forgive himself if Varshith cannot survive. He has always empathized with people in pain and sorrow. Now it’s our turn to give him a healthy life