Help Me Pay Fathers Medical Bills and Repay Medical Loan | Milaap
Milaap will not charge any fee on your donation to this campaign. 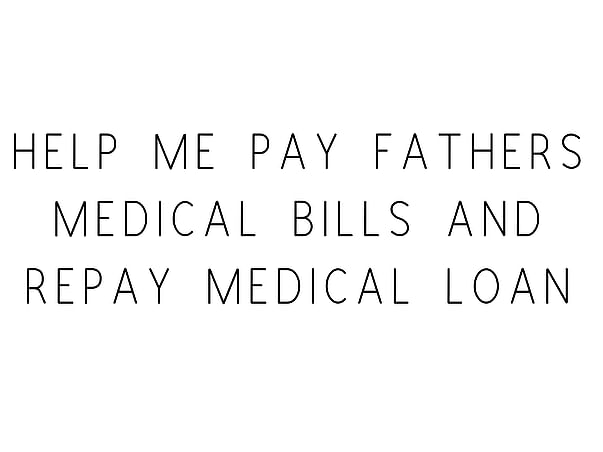 Hi everyone,
My name is Utsav Kamlesh Devalia, I reside at Kalyan (Kongaon). My father was unwell during ganpati, and had admitted in ICON HOSPITAL (DOMBIVALI), he was suffering from ARDS (Acute Respiratory Distress Syndrome) which had progressed from Viral PNUEMONIA & SWINE FLU (INFLUENZA A - NIHI-2009, INFLUENZA B & RSV) and have been on MECHANICAL VENTILATOR support on Wednesday (12/9/18). It has damaged lungs very severely.
Since it was swine flu, it was not easily detectable & had detected on Thursday (13/9/18) via reports of Hinduja Hospital. Afterwards my dad was on VENTILATOR SUPPORT & ECMO SUPPORT (can be called as dialysis of lungs).
ECMO machine being a costly affair is rarely available in Mumbai , that too maximum 3-4 machines only, so we had to transport it from Hyderabad on Sunday (16/9/18).
It had per day cost of 60,000 (excluding hospital ICU exps, medical expenses and ECMO insertion charges).

My father had expired on 29th September 2018 due to multiple Organ Failure. We still have an outstanding bill amount of RS. 12,00,000 /- which has to be paid off or else we won't be receiving any type of help from government/NGO institute in repaying the medical loans.

It's my kind request to help us to close the bill amount, so that we could receive help from NGO institutions. 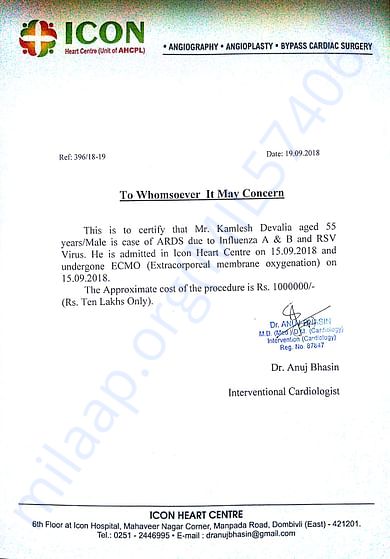 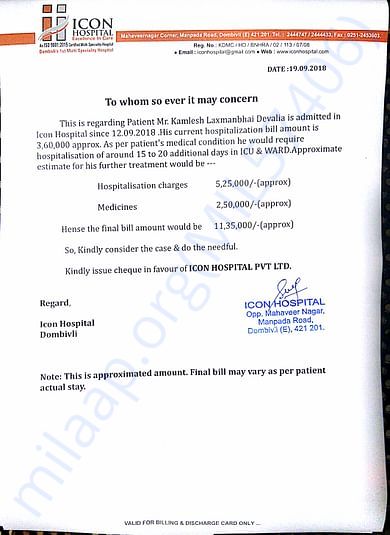 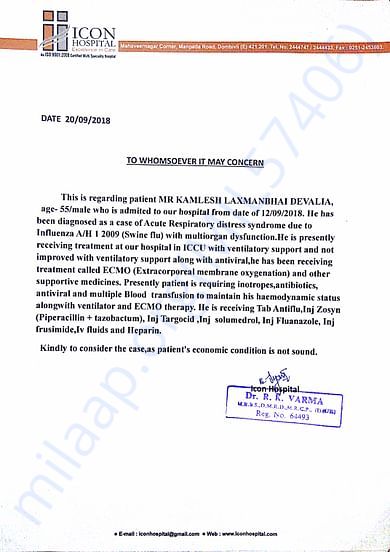 Scan & donate with any app
check_circle_outline Download payment receipt
Report fundraiser
See how thousands are crowdfunding for their causes on Milaap
Rs.100 raised

Donated to this campaign via Bank transfer/QR Code? Click here if you can’t find your donation listed below.
A
Anonymous donated Rs.100
Report fundraiser

You are sending a message to
Utsav Devalia
Go back 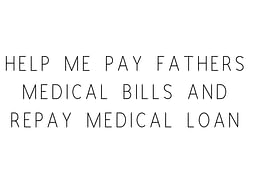