Pregnant Mother Will Lose 3-Year-Old Baby Girl To Cancer Without Help | Milaap
This campaign has stopped and can no longer accept donations. 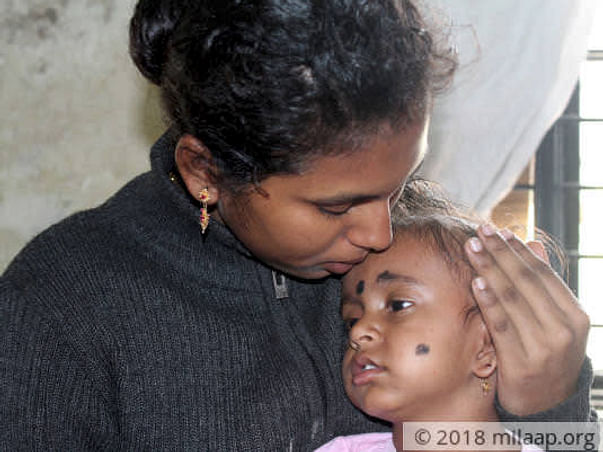 Whenever Lakshmi had worrying thoughts, little Tejashree’s giggles and incessant chatter was enough to make her feel better. Tejashree loved nothing more than running behind her mother when she did household chores, squealing ‘Amma, Amma’ in her cute voice. But now, those very squeals of joy have been replaced by cries of pain. Cancer has not just taken away Tejashree’s hair but also her vigour and enthusiasm. Lakshmi, who is 9 months pregnant now, cannot do anything but watch helplessly as her baby girl falls prey to this dangerous disease.

“She is weak and has lower levels of energy, but she still tries to smile once in a while. She wants me to hug her all the time now, and cannot stay away even for a moment. She keeps asking me when her new sibling will arrive in this world, but I am worried that she will slip away from us before she gets to meet him or her.“-Lakshmi, with tears in her eyes.

Tejashree was her usual self that day – she had been playing with her toys and jumping around her small house when she suddenly fell ill by evening. She developed a high-grade fever along with unbearable headache. Her parents took her to the local clinic, but she did not get better even after two days. The opposite happened – her fever was now accompanied by diarrhea. She couldn’t even open her eyes from tiredness.

“She couldn’t even tell us what wrong – she had become that frail. She had stopped eating completely as well – my attempts to feed her liquids were not successful as she had begun vomiting everything. We wondered how our seemingly-happy child had gotten sick in a few days; we knew we had to take her to a good hospital as her condition was looking very bad.”-Somashekar, father

After a couple of tests, Tejashree was diagnosed with Precursor Acute Lymphoblastic Leukemia (T-ALL), a severe type of blood cancer that results in the production of excess white blood cells. Lakshmi could not believe what she was hearing – she had heard from relatives and friends that cancer was a deadly disease that often results in death. When the doctors said the word ‘cancer’, she could not control her overwhelming emotions and fainted. She has still not come to terms with the fact that her innocent baby may be taken away from her as a result of her family’s poverty.

“I was in my early months of pregnancy and already going through a sensitive patch, emotionally and physically, when I learnt of Teju’s illness. A certain fear took over me that day – I have not been able to escape it till this day. I can’t imagine losing my baby.”-Lakshmi

Injections make little Tejashree scream in pain, she begs her parents to take her home

Cancer has made Tejashree cranky and irritable. Her day begins with eating medicines, followed by more medicines. This poor child asks her parents to give her parathas to eat, but they try to change the topic because all she is allowed to eat is idli and milk. Her father tries to tell her stories to make her at ease, but Tejashree absolutely hates the hospital environment. All she wants is to go back home – her helpless parents have no words to calm her.

”At the sight of injections she says, “Amma, beda, beda” (Amma, no, no). She thinks we are punishing her for a mistake she didn’t do. She is going through a lot of distress, but how can we take her home? How can we tell our dear child that she will die without these painful injections?” - Lakshmi

Somashekar has been jobless for 4 months, he cannot afford to continue Tejashree’s treatment

Somasheka used to work as a daily wage labourer, earning as little as Rs 200 a day before Tejashree’s diagnosis. He had to beg and borrow money to start her treatment, and even stop going to work to take care of his pregnant wife and sick child. Now he is left with absolutely nothing.

“I have spent almost 3 lakhs till now – it is an amount that I had never seen before in my life. But I need 5 lakhs more to keep her in the hospital – I don’t know how and from where I will arrange that. We are living at the mercy of people who feel bad for us and get us food to eat. I cannot even afford her injections and medicines now. Please help me.”-Somashekaran

A happy Tejashree before cancer affected her.

Baby Tejashree is suffering from severe blood cancer, for which she needs chemotherapy and supportive care. She has undergone 2 cycles of chemo till now, but she needs 2 cycles more to survive. Her heavily pregnant mother and jobless father cannot afford to buy food at this point, after exhausting all the money they had borrowed for her treatment. This child can survive with proper care, but these parents need your help to fund it. 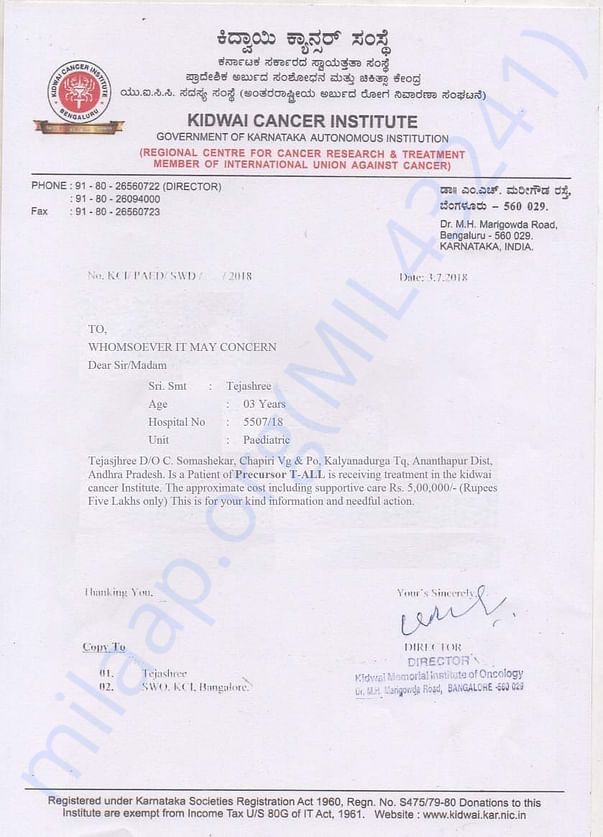 We regret to inform that  Baby Tejashree passed away one month ago despite all the efforts as she had  suffered from cancer again and was undergoing treatment for the same in hospital. There are partial funds left, and we would like to utilize that for another child- Jhansi.

We thank you all for your support and contribution.

We are delighted by the support shown towards Tejashree.

Please keep her in your prayers!

Thank you all for your support and love!

Tejashree is still undergoing her third cycle of chemotherapy for which she has to take 20 injections in total. Her fever continues to be a side effect of the treatment, however is normal as per the doctor. Depending upon the reaction to the treatment, future course of action will be decided soon.

Please continue to pray for her good health. Will keep you posted.

Scan & donate with any app
check_circle_outline Download payment receipt
Report fundraiser
Know someone in need of funds for a medical emergency? Refer to us
Rs.637,188 raised

277 Supporters expand_more
This campaign has stopped and can no longer accept donations.
$150 Million +
Raised on Milaap
Are you in need of financial support for medical or personal emergencies, or a social cause?
Start a fundraiser
Or
Know someone in need of funds for a medical emergency? Refer to us
Campaign organizer contact_mail
T
Tejashree
Beneficiary: Tejashree info_outline

May God gives her a normal life

Get well soon. God will b with you

May God Bless Her

May God gives her a normal life

Get well soon. God will b with you

May God Bless Her

T
You are sending a message to
Tejashree
Go back 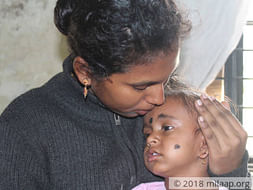