An Injection Damaged Her Kidneys 13 Years Ago, And Now She Needs Help | Milaap

An Injection Damaged Her Kidneys 13 Years Ago, And Now She Needs Help 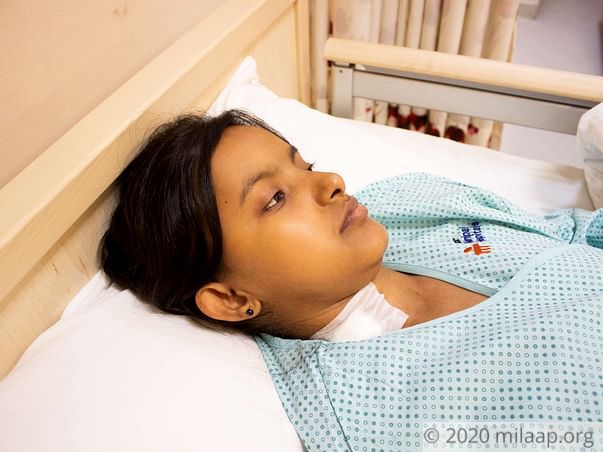 "The doctor told us to inform our relatives. They gave us 24 hours time, saying only a miracle could keep Supriya alive." - Nandita

Supriya is 25. She looks more like a 13-year-old. For the past decade, she has been barely alive, surviving on dialysis or medicines. Her kidneys were failing, and finally in November, she was rushed to the ICU after falling unconscious. A miracle saved Supriya that day, but she may not be so lucky again.

"In 2006, Supriya got malaria. She got an injection that damaged her kidneys. They told us she needs treatment but we could not afford more than 15 dialysis sessions. We went home." - Nandita

Nandita and Sudip Sen come from a poor economic background. They are illiterate and did not comprehend the seriousness of Supriya's condition. Since she bounced back after dialysis, they believed she was cured. As the months went by, Supriya got weaker. She was not growing as teenagers normally do. They believed it was normal. If Supriya had gotten help at the time, she would not be in a grave situation today.

She felt like she was dying every single day

"In 2012, she had UTI (urinary tract infection). We went to Vellore where her tests showed that her kidneys were in a bad state. We thought it is just a UTI and went home with medicines when she needed dialysis and transplant at that time."

Supriya's weakness took over. She was unable to attend school or college. She tried to pursue distance education, but had to discontinue. A prisoner in her own bed, Supriya's hemoglobin count dropped to 2, and she collapsed in November 2018. The family had no option but to rush her from city to city, hospital to hospital, for a solution.

"It was a miracle she survived. Now she needs dialysis at least twice a week. Her kidneys are not working anymore. I will donate but we don't have the money."

Supriya is frustrated. All her life, she has only known the walls around her. She has been in pain for over a decade without any relief. She was even ridiculed by the children in her neighborhood for being underweight, while the truth is that she just cannot put on weight. At just 38 kilos, Supriya is struggling to stay alive.

Her only wish is to live, not just survive, and you can help fulfill it

Sudip Sen is a tea-garden worker in Assam. He works all day long to get a few hundred rupees. They had only one child hoping to provide her with everything she wanted. The only thing she wants is to live, not just survive. This wish is something both Sudip and Nandita have been struggling to fulfill. Nandita can donate one of her kidneys, but having moved to Delhi for treatment, the family is having a tough time trying to find a job.


"We would have lost her that day in November. Our family in Delhi got us the help we needed. There's only so much everyone has been able to do. Money is a problem. I can never arrange Rs. 8.5 Lakhs. Not now, not ever. Help me save my daughter." - Nandita 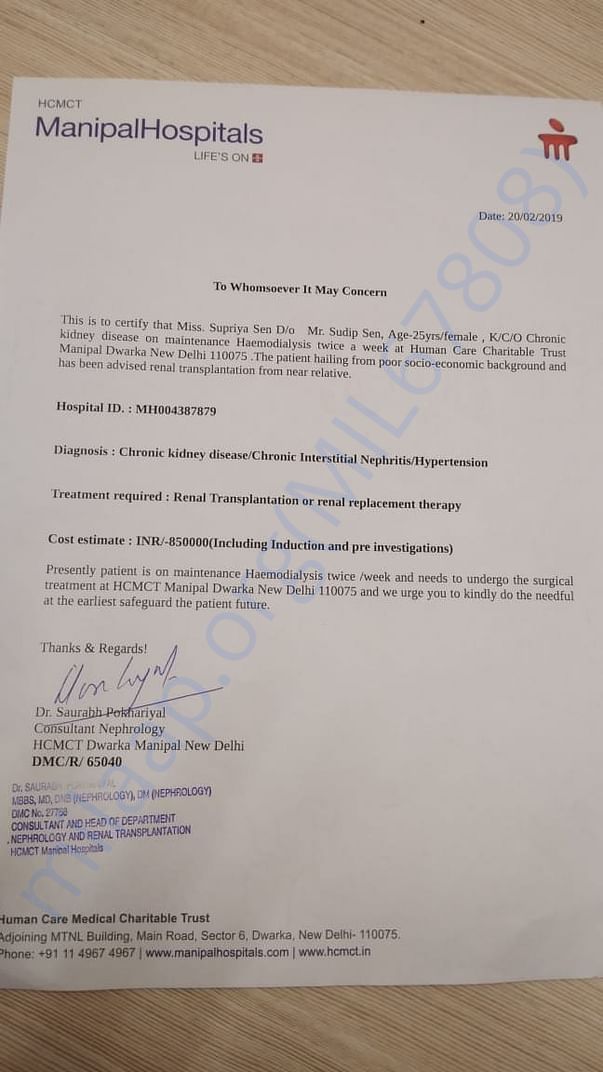 We would like to inform you that Supriya is doing fine and is at home. She will be under doctor's supervision for 3 months. We shall keep you posted on Supriya's health.

Thank you for all the support and blessings.

Thank you for the love and support you have shown Supriya Sen.

Supriya has successfully undergone the transplant and she is doing well. There are no post-transplant complications, she has to visit the hospital for follow-ups to ensure speedy progress.

Sharing a few pictures of her taken at her home:

Report fundraiser
See how thousands are crowdfunding for their causes on Milaap
Rs.422,061 raised

May Sai show his miracle and heal you, give you a long happy life with family. On Sai Ram

You will get well soon. Good will bless you.

God bless you and heal you!

May Sai show his miracle and heal you, give you a long happy life with family. On Sai Ram

You will get well soon. Good will bless you.

God bless you and heal you!

SM
You are sending a message to
Shamshuddin Manipal
Go back 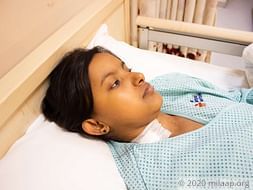 An Injection Damaged Her Kidneys 13 Years Ago, And Now She Needs Help