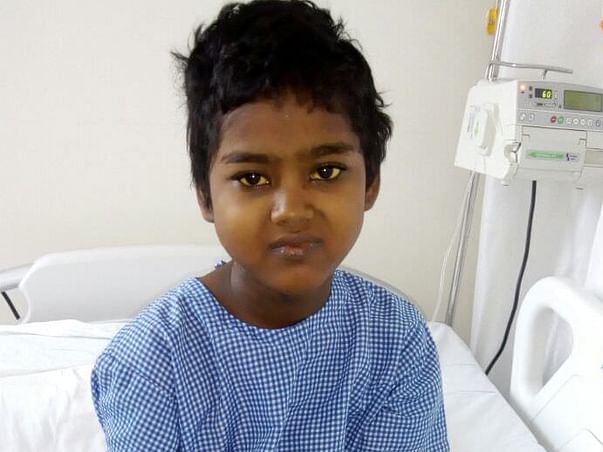 8 year old Sivarthana has been diagnosed with Acute Liver Failure. She needs an urgent liver transplant to live. Her father has come forward to donate a part of his liver. He is a daily wage laborer from Tamil Nadu. He has no means to afford this surgery. This is their story.

“We have already lost a month trying to find a way to save her. Now we just have 1 week left to fund a liver transplant. If we can’t, our 8-year-old daughter will die.”

Sivarthana is in 4th standard. She is way more intuitive than other children her age. While she should be terrified, crying and throwing tantrums from excruciating pain, this little girl is biting down and braving acute liver failure without a sound, to reduce her parents’ suffering. Now, in a critical stage, Srivarthana needs a transplant without which she will lose her life in a week.

We did not feed her because we thought she had indigestion

45 days ago, Sivarthana was affected with jaundice. The villagers always preferred naturopathy, but the medicine caused her to bloat up. They consulted an allopathy doctor in Salem who was concerned about a liver disease as there was fluid accumulation in her belly. He referred the family to Kanchi Kamakoti in Chennai.

“We thought her stomach was bloating from indigestion. So, we started feeding her less hoping it would resolve itself. She used to complain of hunger all the time, but we controlled her diet thinking she would get better. Now our daughter is weak and can’t even stand her treatment.

At Kanchi Kamakoti, a liver function test revealed that Sivarthana was suffering from Wilson’s disease. Copper accumulation in her liver had damaged the organ. She was immediately admitted to the hospital and started on treatment. Medicines did not help, and within a week, she began to vomit blood.

“The doctor said a transplant is our only option, and referred us to Global. The problem was that we could not afford the surgery. Hospitals were not getting the government fund for transplants so they turned us away. We tried few other places, and eventually landed at Aster in Kochi.”

How can we afford lakhs when we make just Rs. 350/day?

Having lost over a month already, Sivarthana’s condition has gotten worse. She needs a liver transplant within the next week. Her father was found to be the only match, and if the funds are in, she can have the surgery as soon as possible.

“My wife and I work together as Kaicheri weavers. We make Rs. 350/day. I must give up work for at least a month, but if that can save my daughter then it is what we must do. For now, my brother-in-law has helped us in funding her treatment. He took a loan of Rs. 4 lakhs, and all of it is gone. We do not know how we are going to afford this surgery without help.”

Sivarthana, being deprived of food for over a month can only think of satisfying her cravings. She is begging her father for sweet corn, dosa, and mother’s sambhar. She does not like Kerala rice and she is afraid she may die without having one last good meal.

“She overheard us talking about her condition, the surgery, and she has seen my wife crying. Unfortunately, she eavesdropped on a conversation where my wife said she will commit suicide if my daughter dies. Since then, Sivarthana has not shown weakness because she does not want to hurt her mother. All she does is just act like a little child who wants chocolate. It is just tantrums for food, as if she won’t get a chance later.”

Ganesh and Ambika, the parents understood their mistake after talking to the doctor. They have been giving Sivarthana all she needs to gain strength for the surgery. Rs. 7.5 Lakhs is the cost estimated for the surgery, and these parents cannot afford it. They were turned away from so many hospitals, and now they just hope for a miracle to save Sivarthana within the week.

Your contribution can do more than just save her life.
100% of funds raised will be transferred towards Sivarthana's treatment. Every contribution will be matched to raise funds faster and help this.
8-year-old.
This fundraiser campaign is supported by The Pravin Agarwal Fund.