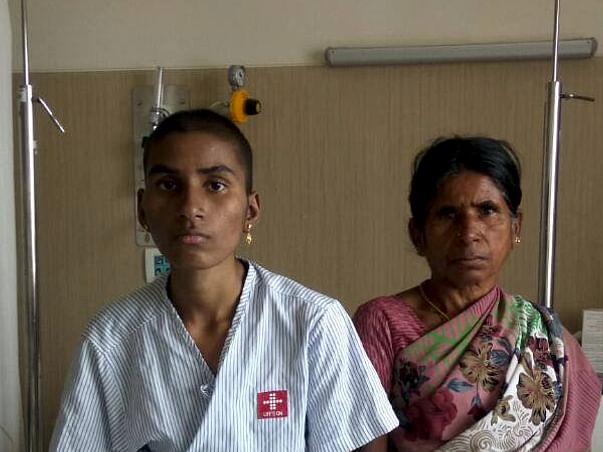 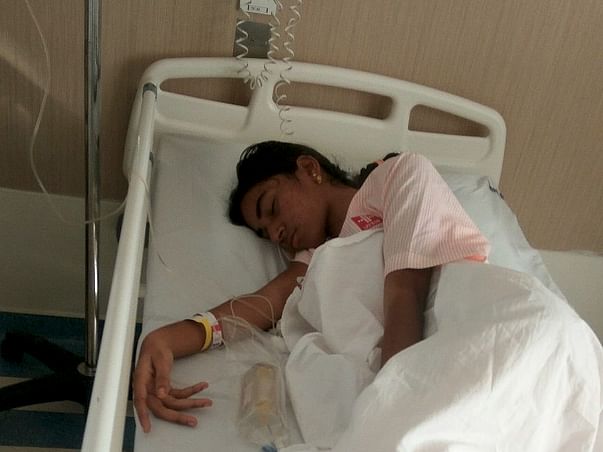 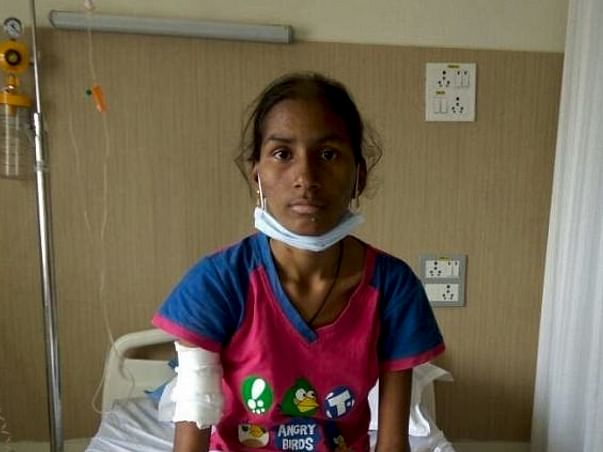 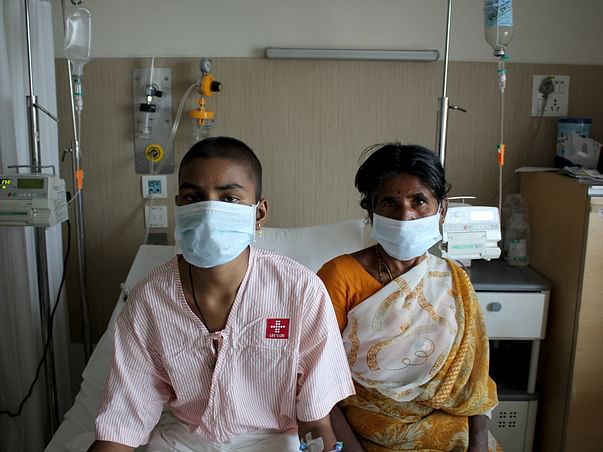 Previous Next
“Sirisha is just too fragile to know about her condition. She refused to comply with tests because of the pain it may cause. We do not want her to know she has cancer because that will cause a lot of trauma. Yes, it is very hard to see her battling the disease and the effects of chemotherapy. But we have no other choice for now. Everything we do is to save her life.”
17-year-old Sirisha complained of a back pain when she was studying for her 10th standard exams. Although she was prescribed medicines, the pain intensified until it was unbearable. What they hoped would be something related to the muscle was, in fact, a diagnosis of acute leukemia. Ever since then, Sirisha has been battling the worsening symptoms of the disease without even know what is ailing her. Venkat, her brother is going to the ends of the earth to keep her alive and help her win this fight.

“My parents worked as laborers on agricultural lands. We had nothing growing up and they toiled hard for us, together earning Rs 250/day so they could educate us. If it was not for them, I would not have a job at IBM today. After all these years, I have been able to slowly drag them out of struggle, stabilize the financial situation at home, take care of my aunt and her children as well, and help Sirisha achieve her dreams. Just when we thought things were getting better, this happened.”
Sirisha lived with her older brother Venkat and her parents, Venkateshwara and Kichamma in a small village nestled in Andhra Pradesh. Now 34, Venkat is married, has a baby girl and is living in Bangalore where he works.
Last April, Sirisha began to complain of back pain. They visited a local doctor who prescribed medicines. Although she was on the treatment, the pain got worse until it spread to her thighs and she began to scream all day and night asking to be taken to a different doctor. The family rushed her to Manipal Vijayawada where on suspicion, the doctor tested her bone marrow and confirmed that she had Acute Myeloid Leukemia – an abnormal growth of white blood cells in the body. She was advised to opt for induction chemotherapy and a consolidation treatment which would cost Rs. 20 Lakhs.
“It was too expensive for us. So we went to a hospital in Adyar, and even Vellore. The minimum cost estimate we were given was Rs. 10 Lakhs. Unfortunately, the doctors said they had to perform the bone marrow test to confirm again. Sirisha refused to cooperate. She was so afraid and threw a big tantrum. They said they could not help us if the patient does not cooperate. So we came to Manipal Bangalore."
In January, Sirisha had the first consolidation therapy. Her parents, unable to afford the treatment costs went back to work in the fields. Venkat liquidized all his saving. Friends and relatives came forward to help the family. Venkat also applied for a loan. On the whole, they have been able to pay Rs. 12 Lakhs to the hospital.
"Sirisha is closest to our father. They share a very beautiful father-daughter bond. He is also very attached to her. We have not been able to tell either of them about her actual diagnosis fearing for what it might do to them. They would both not handle it well. How can I say Sirisha’s life is in danger? I can’t face either of them with this news! Instead, we said it is a stomach issue, and she needs to be in the hospital until she recovers. My father is back in the village and they keep talking over the phone.”
Over the past 5 days, Sirisha’s condition has deteriorated with low platelet count. Her dosage was reduced so she could gain back her strength. She has not been allowed to eat anything, and she is only on saline. Sometimes, she cannot even have water as she has constant vomiting. The hospital is still trying to find a matching donor for Sirisha to perform a bone marrow transplant. In a few weeks, she will have to start her 4th cycle of chemotherapy.
Venkat does not have any more leaves left to sit by his sister’s side. Out of sheer goodwill, people have helped this family, but they are now out of resources and need your help to save this girl.

At the end of it all, she is a 17-year-old teenager, missing out on the best phase of growing up, writhing in intolerable pain, incapable of understanding what has happened to her.
You can help Venkat save his sister.
Supporting document 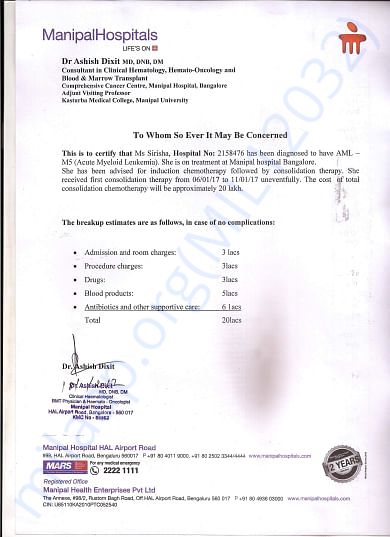 Sirisha is still under chemotherapy and needs to undergo Bone marrow transplant soon. Please do share the campaign with your friends and family too.

Here are some recent picture of Sirisha-

Donated to this campaign via Bank transfer/QR Code? Click here if you can’t find your donation listed below.
NR
Namrata donated Rs.5,000

Wish you a successful treatment and recovery.

Donated to this campaign via Bank transfer/QR Code? Click here if you can’t find your donation listed below.
NR
Namrata donated Rs.5,000

Wish you a successful treatment and recovery. 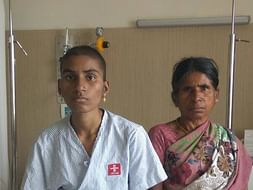