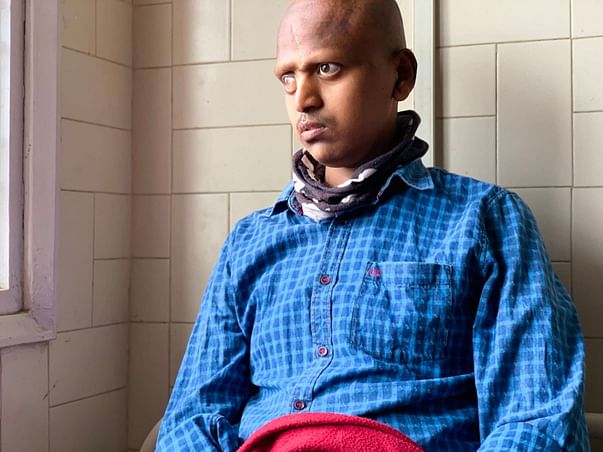 22-Year-Old Shreyas Gurav sits all alone in his room these days. He refuses to see his parents because of the guilt that is eating away at him. They’re having to spend so much money on him and it upsets him. Seeing Shreyas slowly spiralling into depression, Sunil Gurav asks some of his son’s friends to come by the house every day. But that does little to lift the young man’s spirit.

A year ago, Shreyas was diagnosed with Acute Lymphoblastic Leukemia, a severe blood cancer. His only chance at survival is prolonged chemotherapy and bone marrow transplant - a treatment that his parents are struggling to afford.

There was something else besides kidney stones

Shreyas had always been high-spirited and lively. In his spare time, you would find him with a wrench and screwdriver in his hand, hunched over a broken-down car. In April 2020, Shreyas had been only months away from starting his college course, when tragedy struck.

“His face had swelled up as if it were bee-stung, and he would hold his tummy or his hip, complaining of pain. I took him to a urologist, thinking he had a kidney stone - which he did, but the doctor refused to operate because she suspected there was more to his condition than just kidney stones. Shreyas had never been one to fall sick so suddenly, so I was already feeling a little unsettled, but this alarmed me even more. We were then referred to a bigger hospital and asked to get a bone marrow test done. There we were told that my son was suffering from cancer." - Sunil, father

He didn’t know he was sick, until recently

Immediately after his diagnosis, Shreyas started his chemotherapy. His kidney stones persisted, but his cancer treatment took priority. The surgery to get the stones removed was postponed until his first cycle of chemotherapy was done. He is due to start his second cycle soon. All this while, Shreyas had no idea of the disease that is afflicting him. But he found out about it accidentally.

“At first, we hadn’t told Shreyas about his diagnosis. He’s young, and we were afraid of the impact it would have on him mentally. We didn’t want him to worry about anything else and focus on getting better. But he found out about it accidentally and he couldn’t grasp it. He was very shocked and scared knowing he has such a dreadful disease. But we managed to calm him down by assuring him that it is manageable and treatable.” - Surekha, mother

Only transplant can save him, but it is beyond what his parents can afford

Through all this, Shreyas has been showing great improvement. With continued treatment and subsequent bone marrow transplant, he will be able to recover from this disease. But his parents have exhausted all their resources and have no money to pay for his treatment. His father, a cab driver, has spent about INR 9 lakhs on his treatment so far by borrowing from their relatives, selling their 2 vehicles and mortgaging their home. The current pandemic situation and lockdown has also made it difficult for Sunil to find work.

“I am struggling to pay for the one thing that will save my son. I have used up everything I had, but it is still not enough. Where will I get another INR 16 lakhs from? I see how brave he is, fighting this disease with all he has got. It is taking a huge toll on him, yet he doesn’t let us see him suffering. Sometimes he talks to us about his cancer and tells us to stop the treatment because it costs a lot, and that we won’t be able to afford it. But we refuse to give up on him. I just want to save him, but I can’t do it on my own. Please help me..” - Sunil

Sunil’s only wish is for his son to recover from the disease that is claiming his life. Shreyas wants to go back to how life was before his diagnosis. He wants to be able to go to college and do the things he loves. You can make that happen for him, with your contribution. Click here to donate.