Help Sanjit fight Cancer | Milaap
This campaign has stopped and can no longer accept donations. 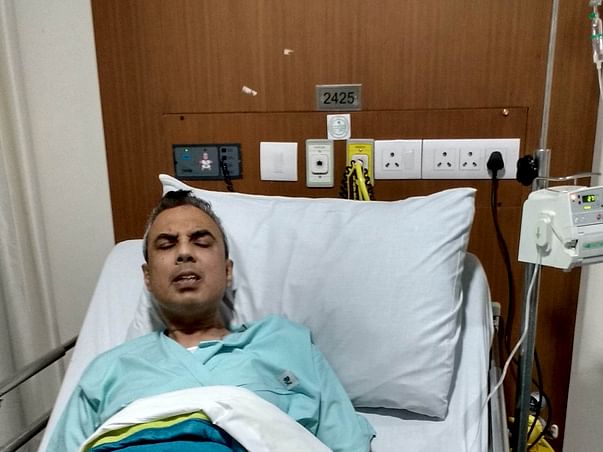 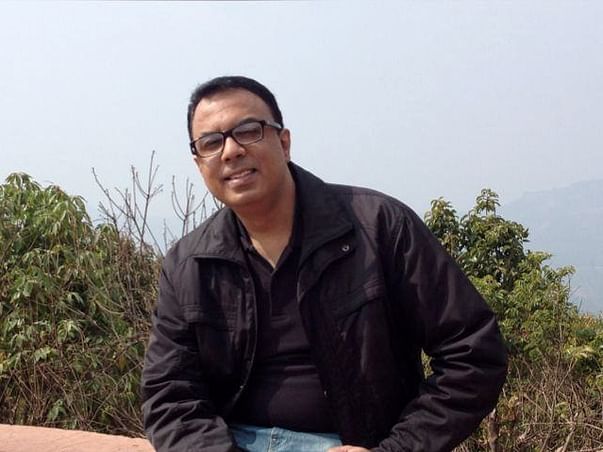 Previous Next
47-year-old Sanjit has cancer in his colon and it is at risk of spreading fast. He requires undergoing an expensive immunotherapy to survive. Unmarried and living with his aging parents, Sanjit and his family have liquidated all of their savings. Looking for help from all possible quarters, Sanjit family is desperate to save their eldest son.

In April 2017, Sanjit started experiencing some discomfort in his stomach. He went to a local doctor who, in turn, recommended complete body check-up along with an ultrasound. Upon finding the presence of water in his stomach, the doctors conducted a colonoscopy, only to find a tumor in his colon.

"We didn't waste any time, we immediately gave a go-ahead for the chemotherapy. Despite everything, his condition kept getting worse. Over course of the hospital stay, his cancer began spreading to different parts of his body. After realizing that his condition isn't likely to get any better at Apollo, we recently shifted him to Max hospital. It's just, I feel, that we are nine months late in doing this", says his brother.

After shifting him to Max Hospital, the doctors here recommended immunotherapy -- a treatment that is mostly at an experimental stage in India. Although expensive, it the best shot Sanjit has at containing his cancer and thereby eliminating it. As of now though, the doctors have started with slow chemotherapy to gauge his body's reaction to the centralized treatment

While happily settled until a year back, both Sanjit and his younger brother have no source of income at present. So far, they have spent close to Rs 60 lakh on his treatment and are expected to arrange for more Rs 25 lakhs. They have liquidated all of their saving and have nothing left now.

"My brother has been sick for past nine months. He did not marry and has only our parents to look after him. But they are also old and unable to extend the care required for a cancer patient. For quite some time, my brother was put on a liquid diet as he couldn't stomach the solid food. Even today he requires a person's support to use the bathroom.

Sanjit has largely led a lonely life. He has worked hard and been a good son to his now aging parents. He deserves a life that is not shrouded in pain and suffering. In order to survive, he needs to undergo a treatment that is prolonged and expensive. Even your smallest contribution can be of immense help to him. 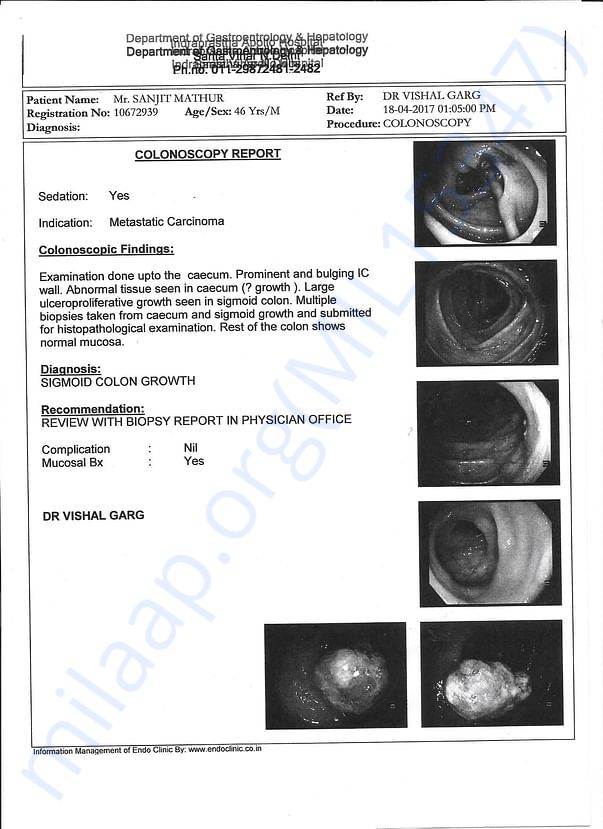 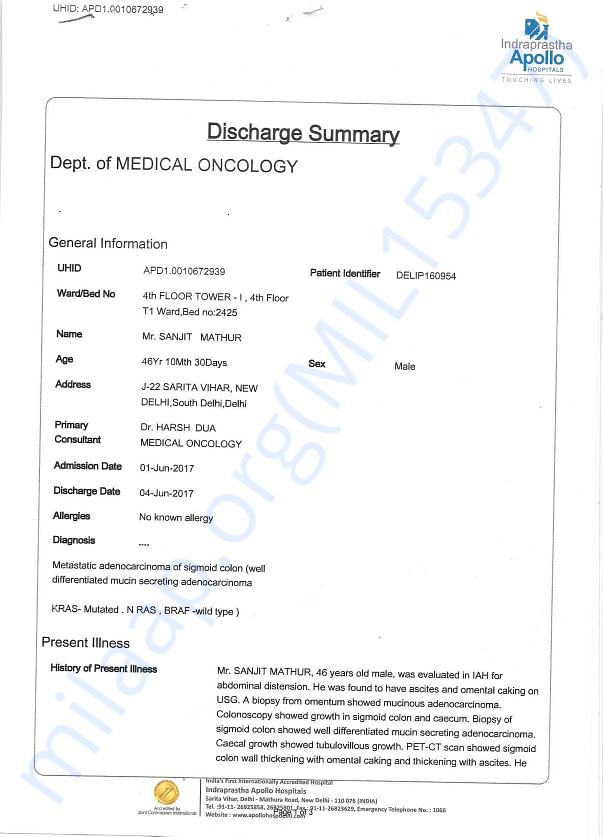 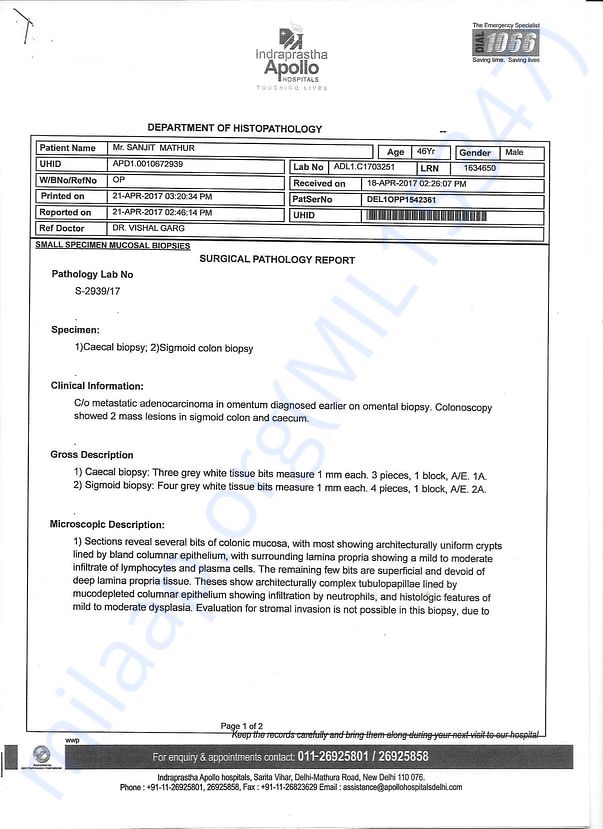 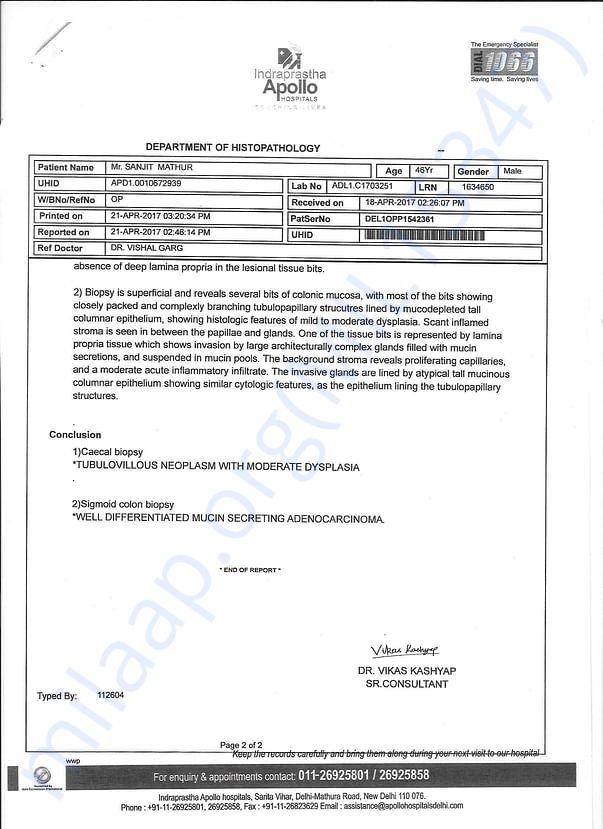 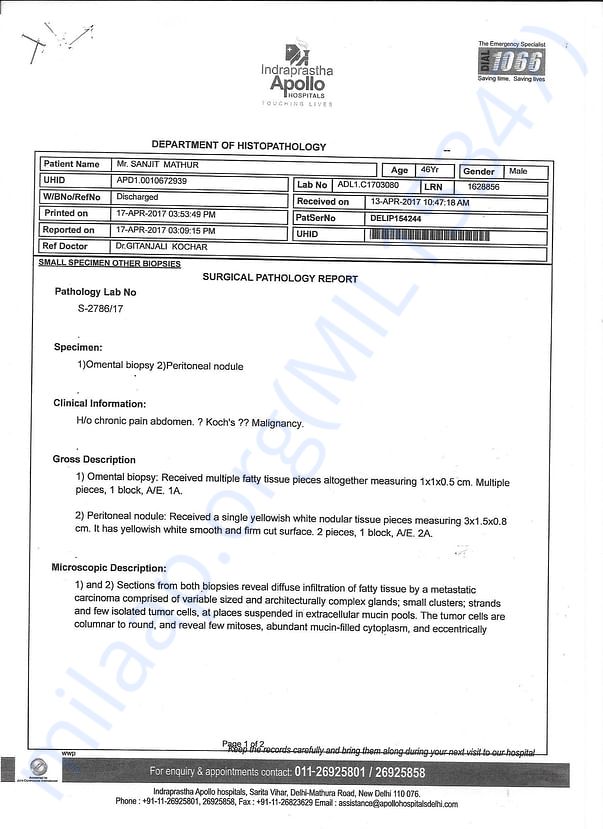 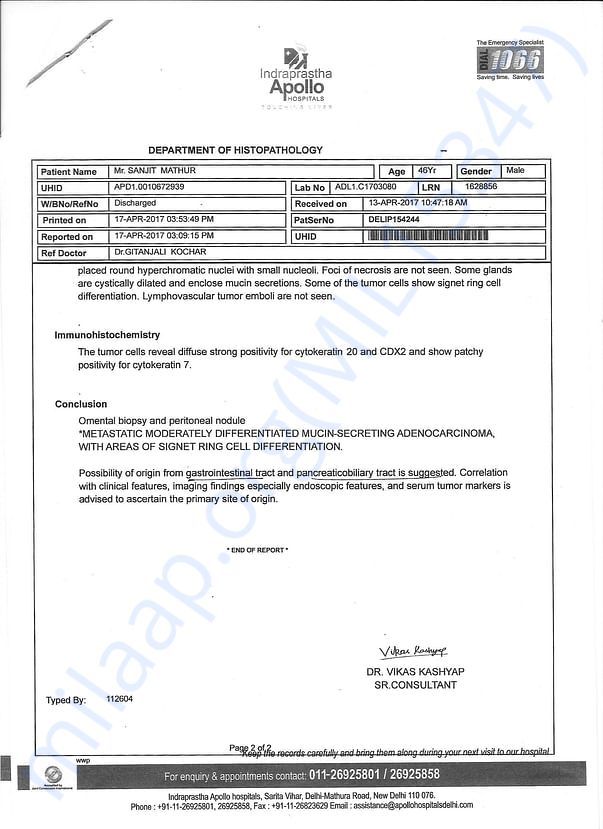 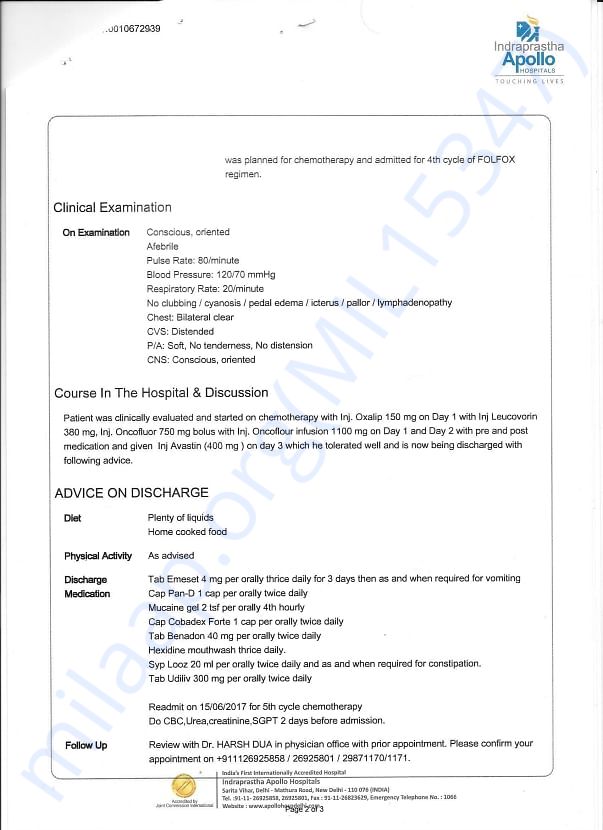 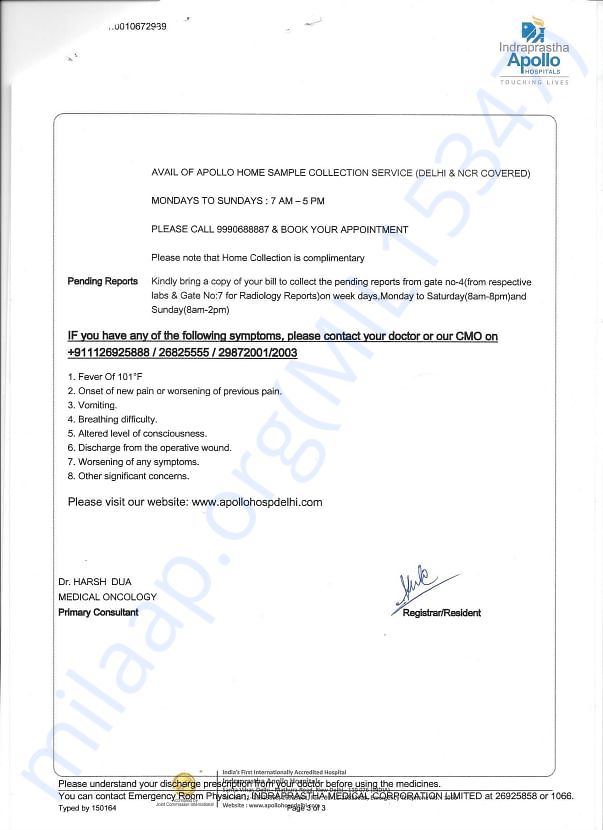 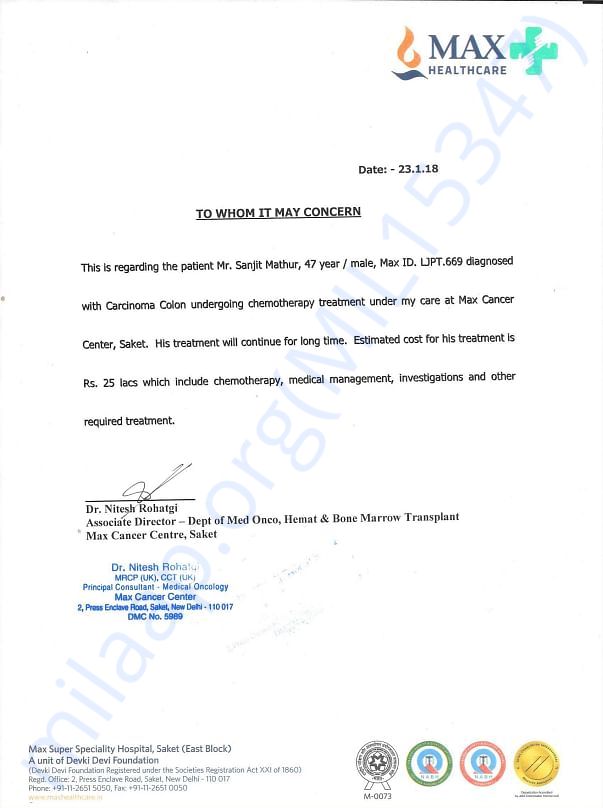 I regret to inform you all that my brother Sanjit Mathur passed away on 11th May 2018 at 2:30 am at Max Hospital Saket.

He fought a brave battle with cancer,but ultimately succumbed to the disease.I would like to take this opportunity to thank everyone for their love and support during all these months.I would like to assure you that your prayers have not gone in vain as I strongly believe that my brother is in a better place,as the last couple of days to his demise,he was in a lot of pain and discomfort.

Thanking you all again.

With inexplicable grief, I'm having to inform all of you that Sanjit passed away on 11th May, 2018 after fighting a strong battle.

He was in the ICU for about 25 days and underwent 18-19 cycles of chemotherapy. His body became weak and started giving complications. He started bleeding and also developed jaundice. His acidic level in his blood started rising. He eventually went into coma in his last days. His cancer started spreading and reached his liver. All of this made it impossible for him to digest food and even water.

Hence, his body started giving up and we lost him. Thank you so very much for your continued support and love. We will forever be grateful to you for enabling us to give him the best of treatment possible.

I am doing much better with your prayers and good wishes.I am still in the hospital but overall my health is picking up as I have been administered new drugs in my chemotherapy session.

It is a long and arduous road ahead, with its fair share of ups and down. I am fighting on and hope to come out stronger, and with a greater understanding of life.

Thanks
Sanjit Mathur
Load more
Donate
Report fundraiser
See how thousands are crowdfunding for their causes on Milaap
Content Disclaimer: The information and opinions, expressed in this fundraiser page are those of the campaign organiser or users, and not Milaap.
If such claims are found to be not true, Milaap, in its sole discretion, has the right to stop the fundraiser, and refund donations to respective donors.

Donated to this campaign via Paytm? Click here if you can’t find your donation listed below.
A
Anonymous donated Rs.5,000
SB
Samrat donated Rs.10,000

Best wishes for a speedy recovery, Sanjit. This comes from Samrat Bose, SCS, Batch of '89.

All the best, Sanjit!

Prey for speedy recover of Sanjit

Donated to this campaign via Paytm? Click here if you can’t find your donation listed below.
A
Anonymous donated Rs.5,000
SB
Samrat donated Rs.10,000

Best wishes for a speedy recovery, Sanjit. This comes from Samrat Bose, SCS, Batch of '89.

All the best, Sanjit!

Prey for speedy recover of Sanjit

A
You are sending a message to
Rekha Pratap
Go back 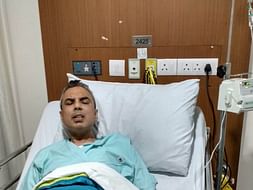