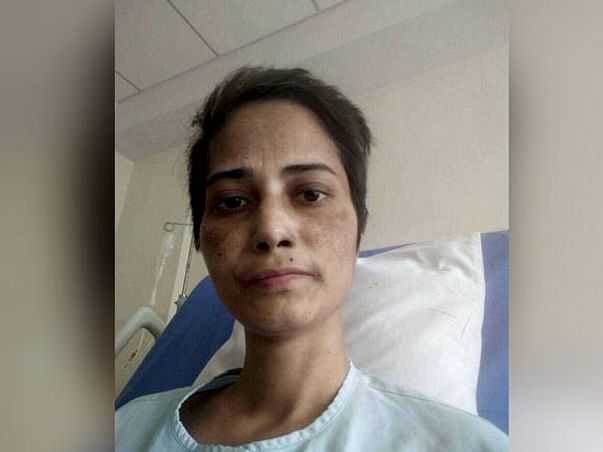 Hello ,
I am Atul Ahluwalia and I seek your support for financing a new line of treatment for my wife, Rita Dey who has been suffering from stage IV cancer for almost two years now. Immunotherapy, is a line of treatment which uses certain parts of a person’s immune system to fight diseases including cancer. We hope that Immunotherapy would give a new lease of life to Rita and help her achieve her sole dream – to see our 5-year-old daughter Aariya, grow.
Ever calm and smiling Rita has been the anchor of our small family. We had a love marriage and she quit her job around the time we became parents to be a full-time mother to Aariya. Aariya has been the center of Rita’s life since she was born and of all the things that cancer has robbed her of, the inability to participate in her daughter’s life during her formative years hurts her the most.

It all started in July of 2015.
What began as a regular cough for my 35-year wife turned into an affliction which would not go away even after several rounds of antibiotics. Soon she started experiencing a dull pain in her upper back which over-time became so bad that she could not even lie down on the bed. We consulted several orthopedic physicians and ENT specialists, but the doctors could not diagnose Rita’s ailment as she has been a non-smoker and a non-drinker all her life.
While Rita was still grappling with the worsening cough and the excruciating back ache she started feeling progressively weak. It was a Sunday around Diwali, I remember, when I got her admitted in emergency ward of the Fortis hospital in Mumbai. Upon investigations, it was revealed that there was significant fluid build-up in her lungs. Further scans revealed the real nature of her ailment - lung cancer which was later confirmed by means of a biopsy as well.
Studies show that lung cancer is not easy to detect as it doesn't show any symptoms till it reaches stage IV which essentially means that the cancer has spread to other organs in the body. Rita’s cancer is a stage IV and is primarily in lung and has also spread to brain, liver and adrenal glands.
We admitted Rita to Tata Memorial Cancer specialty hospital in Mumbai for further treatment. Her lungs were tapped for fluid. To our horror, we realized she had 5 liters of fluid in them, which is significant considering she has always been thin.
Oncologists at Tata Memorial advised certain molecular tests on the tumors. If the tests came back positive, Rita had a chance to survive beyond 2 months. While we waited for the reports she was given radiation for the brain mets. Molecular test results were positive and her treatment was started with targeted therapy. The tumour responded to the treatment initially. However, our happiness was short lived. The tumour soon became unresponsive to the medication. Several lines of treatment have been tried over the past two years, these work for a couple of months and then the tumor relapses.

The treating oncologists at Tata Memorial doctors have now shared with us a new line of treatment for Rita - Immunotherapy. This treatment received an FDA approval in 2016 and has shown good results in significantly increasing life span even in stage IV cancer patients. Immunotherapy uses certain parts of a person’s immune system to fight cancer and this can be done in couple of ways  - by stimulating person’s own immune system to work harder or smarter in attacking cancer cells and giving immune system components, such as man-made immune system proteins to bolster it.The key challenge of this treatment is the cost associated with it. The treatment in India costs about INR 72 lakhs. (approx. USD 111K) for a year. We belong to a middle class family and this treatment , as critical as it is for Rita ,  poses a significant challenge to our resources already under stress from two years of conventional cancer treatment.
Apart from this fundraiser, I am currently working with other organisations which fund cancer treatment including the Ratan Tata Trust. Here Rita’s case was given a special consideration and an amount of INR 6 lakhs (USD 8K) was released for commencing the treatment. I have also submitted my application to Pirojsha Godrej Trust and have written to Wadia Trust, however I still await a positive response from them.
We have already started Rita on the Immunotherapy basis the funds received. I request your support and contributions in order to continue the treatment and help Rita see our little daughter grow up.
Thank You.
Regards
Atul Ahluwalia
Diagnostic and hospital reports 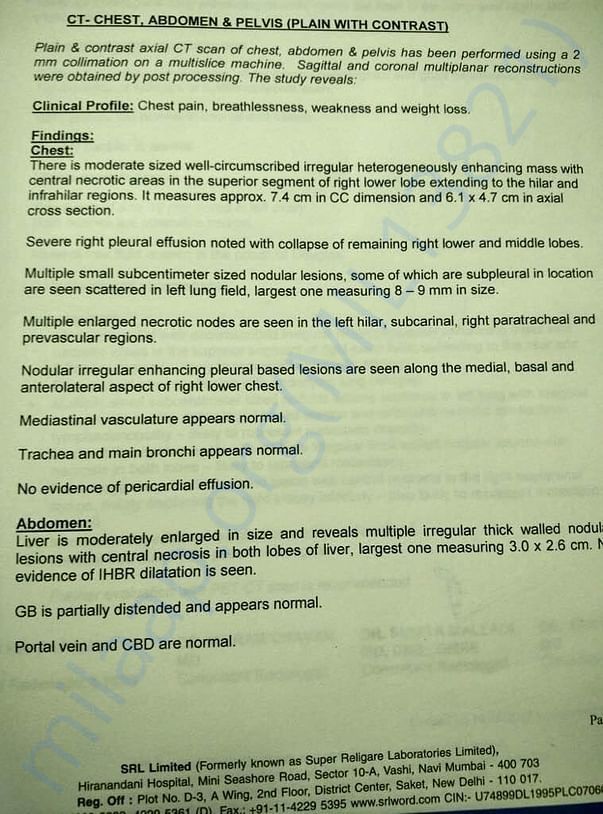 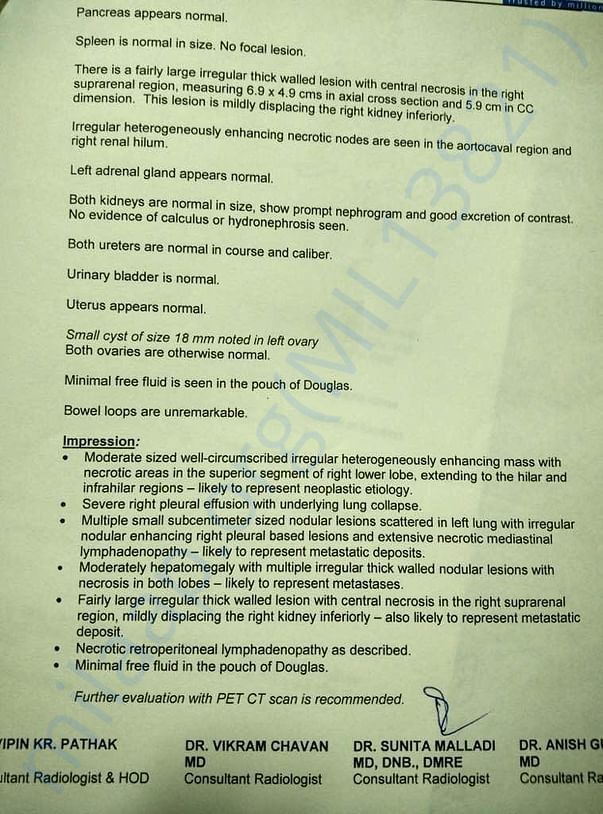 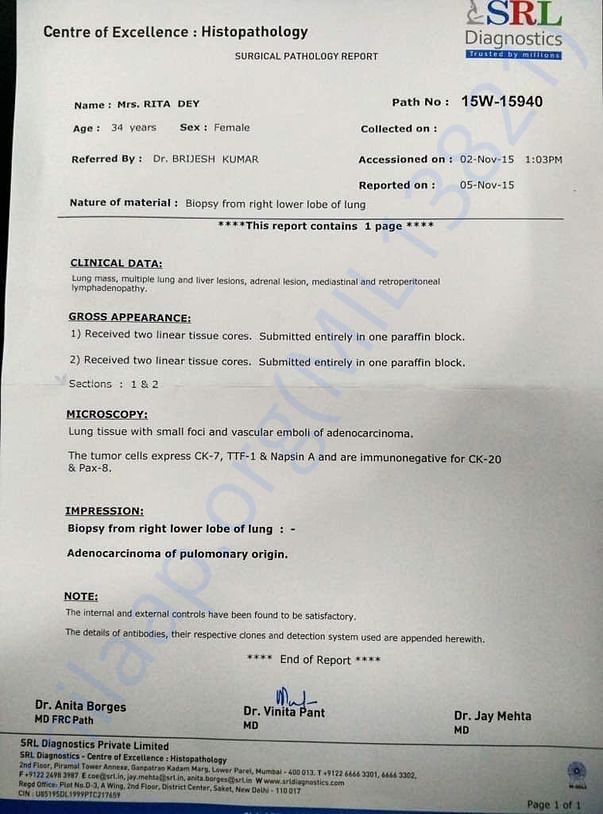 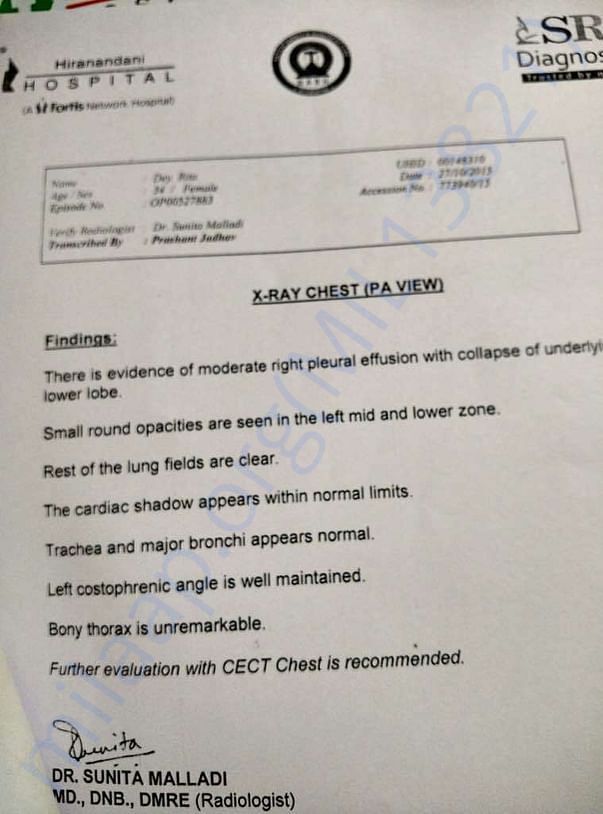 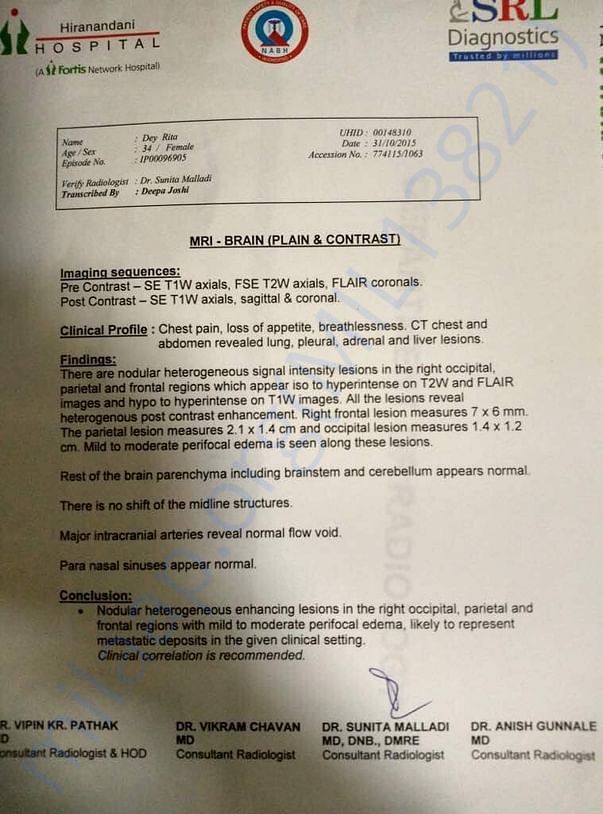 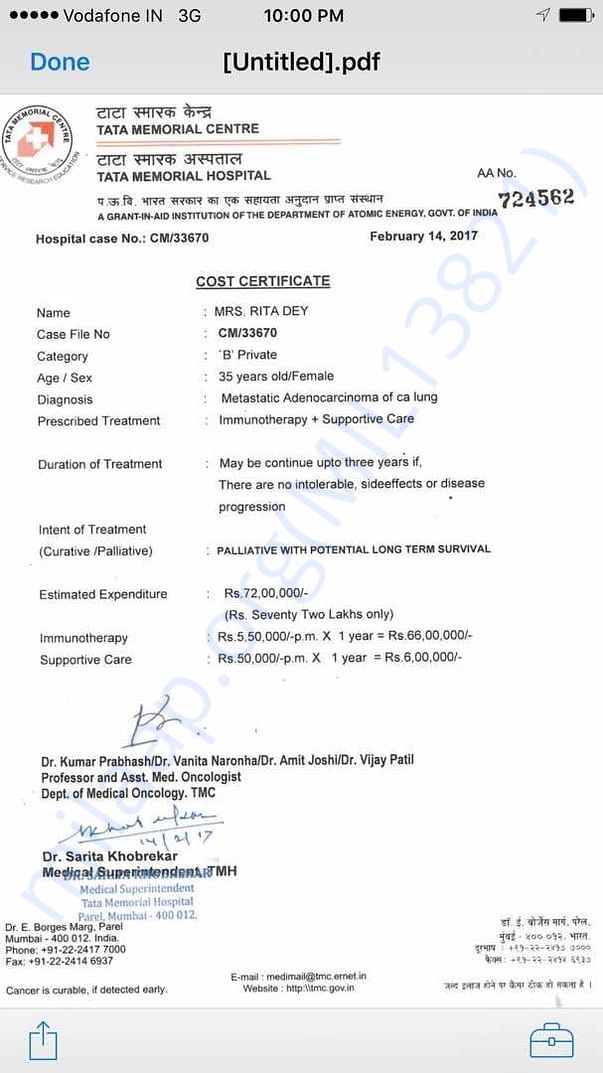 We have some unfortunate news to share. Soumya, Rita's close friend informed us that Rita passed away. Our hearts go out to this mother who endured so much pain and fought so hard for her life. Atul will soon post an update with more details.

Atul is thankful for all the care and support that you have shown to Rita. The past couple of years were the most difficult ones for the family. We hope they find strength in this time of grief. May Rita's soul find peace. Please keep the family in your prayers.

A big thank you to each and every donor who has come out in support of Rita.  A big thank you to all those who have shared this request and helped us in reaching out to so many people in such a short span. It's overwhelming and humbling to witness such generosity in spirits.

We have raised 9 Lakhs plus in a day's time and with your continued support hope to reach the target of INR 72 Lakhs soon.

As an update on Rita's health. 3 sessions of Immunotherapy have been completed till now. She is currently hospitalised in Tata and is undergoing Radiation for her brain mets. We hope that she would be discharged by this Friday.

Regards
Atul Ahluwalia
Donate
Report fundraiser
See how thousands are crowdfunding for their causes on Milaap
Content Disclaimer: The information and opinions, expressed in this fundraiser page are those of the campaign organiser or users, and not Milaap.
If such claims are found to be not true, Milaap, in its sole discretion, has the right to stop the fundraiser, and refund donations to respective donors.

Donated to this campaign via Paytm? Click here if you can’t find your donation listed below.
A
Anonymous donated Rs.1,000
N
Nope donated Rs.100

Donated to this campaign via Paytm? Click here if you can’t find your donation listed below.
A
Anonymous donated Rs.1,000
N
Nope donated Rs.100

AA
You are sending a message to
Atul Ahluwalia
Go back 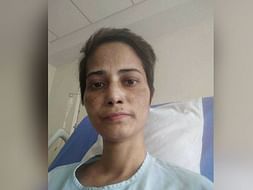