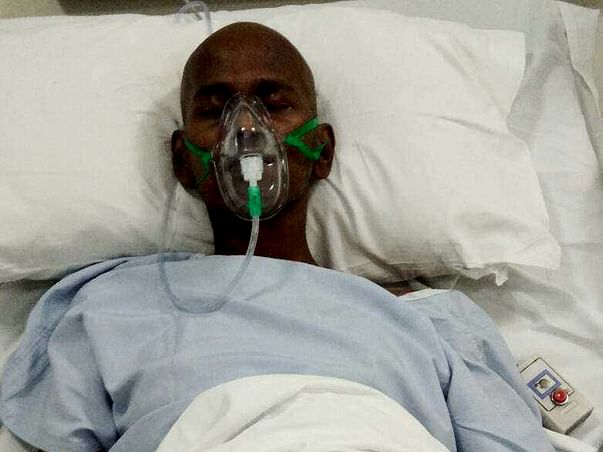 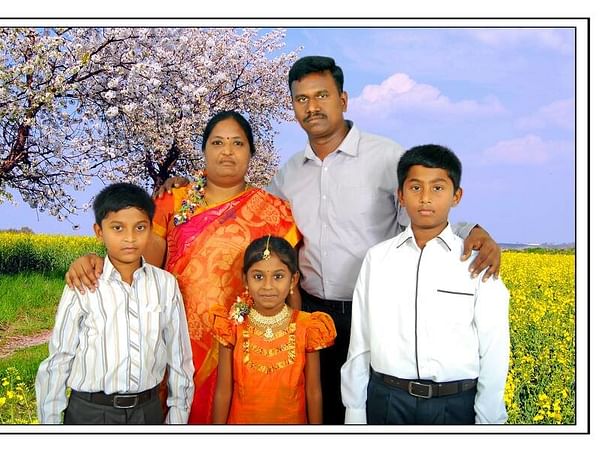 Previous Next
A year ago, when Rajasekar, an ordinary salaried employee started having stomach pains, and had started throwing up frequently, he dismissed it as an ordinary indigestion. However, as time passed the episodes became more frequent and the pain started going beyond his tolerance.
He consulted a doctor, who gave him some medicines, but the pain kept worsening. Desperate for some relief, he consulted another doctor. Another set of medicines was prescribed. The pain in his abdomen went beyond tolerance, and as days went by, he ate lesser and lesser.
43-year-old Rajasekar was a happy father. He has 3 little children, the eldest one being 11 years old. Rajasekar has a disability that causes him difficulty while walking. Despite this limitation, his family of 5 led a happy and satisfied life within his income.

He never imagined that a stomach pain could shatter his picture-perfect life.
As the stomach pain worsened, despite consulting multiple doctors and changing the medication multiple times, Rajasekar started going from hospital to hospital, still not even suspecting that the condition was life threatening. He started taking more and more leaves making trips to different health centres, but got no diagnosis.
A vacation, and finally a diagnosis:
It had been a couple of months, and by now he had lost a lot of weight. His condition had started bothering his wife Sandhyaveni, who shared the problem with her family. During their summer vacations when they visited Sandhya’s family, they decided to consult a hospital in Kolar. There was finally a diagnosis: Rajasekar had a blockage in the intestine, and had developed Cancer on this growth. He needed an urgent surgery, that cost the family 5 lakh.
“Akka is a simple housewife. She has barely seen the world outside. When her husband had to be operated, she was so lost and broken. She urgently needed money. We all tried to pool in, but were still short of money. She even borrowed money on interest from some people. She is still paying those debts,” says Sandhya’s sister Shweta
Battling Cancer for a year:
Post the surgery, follow-ups revealed that the cancer had already spread into his intestine. Now, Chemotherapy was the only way out.
“He had to stop working. The only source of income in their house was stopped. We relatives are trying our best to pool in some funds every month, but that barely suffices for their day-to-day expenses. The debts kept building, as did Akka’s helplessness. The children are really scared. They are not big enough to understand what is happening.”
Rajasekar’s 3 small children were in the hospital for 3 months, looking at the shrunken, unrecognizable bony structure of their father with pipes and tubes all over him.

They were scared and kept looking in through the glass, as though expecting him to transform back into his old self.

Rajasekhar underwent 6 cycles of chemotherapy:
“The injections were given on the right side of the chest. Due to his disability, he leans a little to the right, while walking. Because of this, the pain of the injections was too much to bear and he requested an oral chemotherapy. That switch was the worst decision ever. After that, it was again just being sent from one hospital to another,”
In March, his condition worsened further:
Now, Rajasekar had reached a stage where he cannot even drink water. Upon checking, his intestine had almost disintegrated. His kidneys and gall bladder had also been affected. A bag was inserted to his system instead. This bag requires to be cleaned once in 2 hours and changed once in 2-3 days.
Why they need your help:
“There is no night when we sleep peacefully. It was just 2 days back, at 2.30am: his condition worsened. He could not breathe. He was put on ventilator support. Now, they have moved him to the ICU.”
Sandhya and her family are drowning in debt, and have no source of funds to continue Rajasekar’s treatment. On the other hand, his children are still waiting for their father to come back home one day.
Any small contribution on your end would mean a lot to Rajasekar and his children. 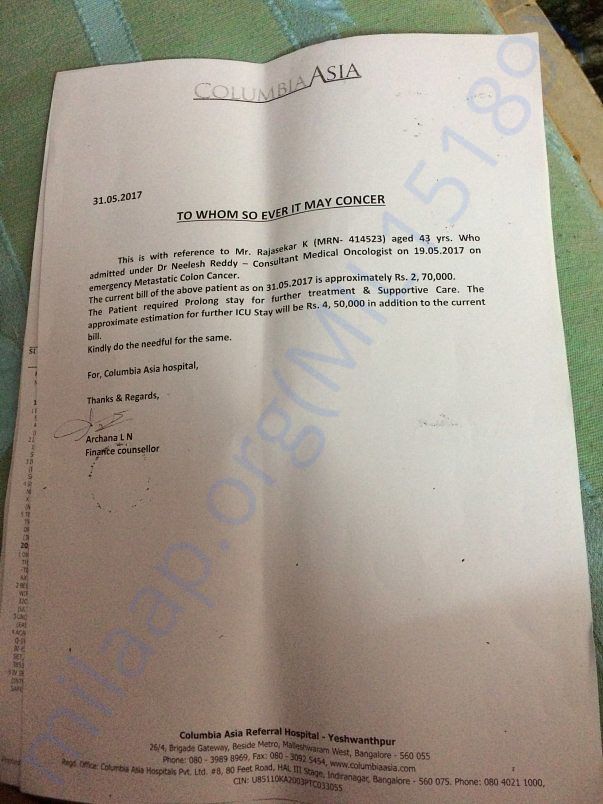 We deeply regret to inform you that Mr.Rajashekar passed away yesterday. We shall proceed to stop the campaign.

May the family find strength in this time of grief.

Scan & donate with any app
check_circle_outline Download payment receipt
Report fundraiser
Know someone in need of funds for a medical emergency? Refer to us
Rs.118,851 raised

god bless him and his family

god bless him and his family

l
You are sending a message to
lyonrajesh
Go back 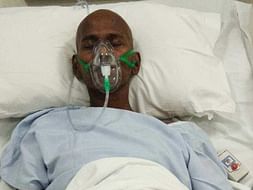