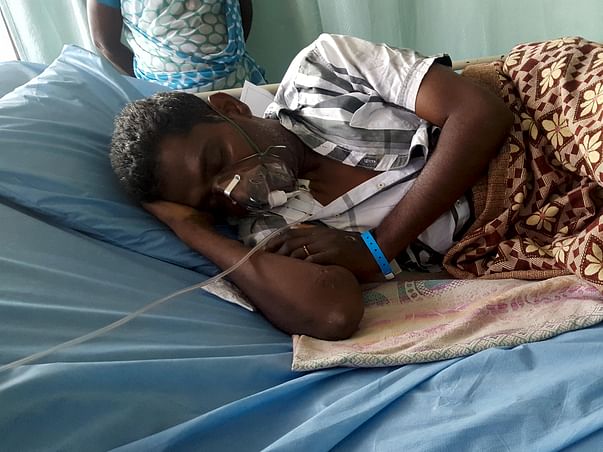 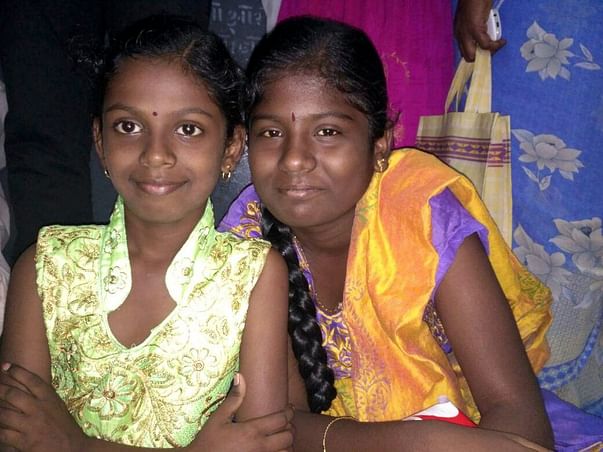 Dear Sir/Madam,
I am Ananth and I am from Ramanathapuram district.
My first sincere request to you is to kindly spare a few minutes of your valuable time to read this.
My uncle, Mr. Selvaraj 41 years of age, has been diagnosed with blood cancer and we are seeking help for his treatment. He is a farmer. And he is a widower and a father of two girl children – one a 10-year old and the other 14-year old. His wife passed away a few days after the second girl was born.
Though he is a farmer by occupation, as the crops failed in the past years, he took to working in a battery recycle factory at Tiruppur to support the two children. The elder is doing 9th std and the younger 6th std.
His ailment began with a simple fever and cold, and the doctors at a private hospital in Tiruppur first treated him symptomatically and when the fever persisted, they conducted further tests and declared that his lungs were affected and it could possibly be the advent of tuberculosis. And they began treating him. However, as the treatment (which by then had already cost us ~3 lac.) was not effective, and as the symptoms were becoming severe, we moved him to the Coimbatore government hospital and admitted him in the ICU ward there.
Unfortunately, his condition was not rightly diagnosed there and therefore we brought him to Chennai, and an Bone Marrow was done at the Apollo Hospitals. The results were analyzed by the chief doctor there and it was diagnosed that my uncle actually was suffering from blood cancer along with his badly affected lungs.
Therefore, we have admitted him in the Kumaran Hospital, Kilpauk, Chennai. His condition has been critical with breathing problems and is on O2 support.
He is the only support for his two children and the only bread earner of the family. As his nephew, from my side (and from my relatives), I have made use of all my financial resources to cover for his hospitalization expenses until now. The doctors have recommended 6 months of treatment for him, which would come to ~Rs. 8 lac.
I will continue to support him within my capacity, and from as much as I could garner from my relatives and friends.
It is my sincere and earnest request to you all to please extend whatever help you can for my uncle to recover from his illness and live for his children.
The hospital can be contacted for any details with regard to my uncle.
Kumaran Hospital, Kilpauk, Chennai.
We hope.
Doctor Letter 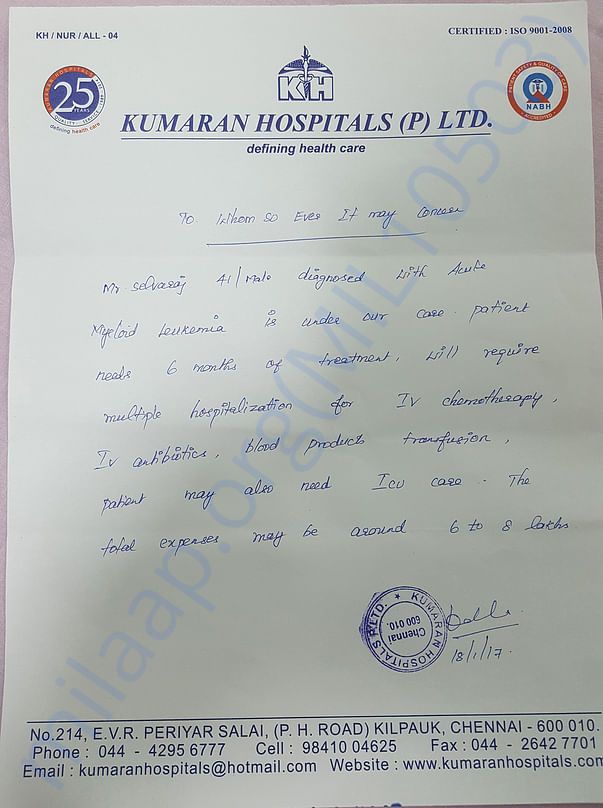 Report fundraiser
See how thousands are crowdfunding for their causes on Milaap
Rs.72,977 raised

Donated to this campaign via Paytm? Click here if you can’t find your donation listed below.
AY
Amar donated Rs.1,000

Get well soon sir ,god will surely help you .

God bless Silvaraj and his family.

Small contribution from my side.

Donated to this campaign via Paytm? Click here if you can’t find your donation listed below.
AY
Amar donated Rs.1,000

Get well soon sir ,god will surely help you .

God bless Silvaraj and his family.

Small contribution from my side.

You are sending a message to
Ananth Xavier
Go back 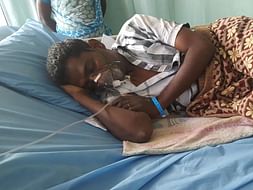