This Laborer Knocks On Every Door After Work Pleading To Save His Son | Milaap
This is a supporting campaign. Contributions made to this campaign will go towards the main campaign.
This campaign has stopped and can no longer accept donations. 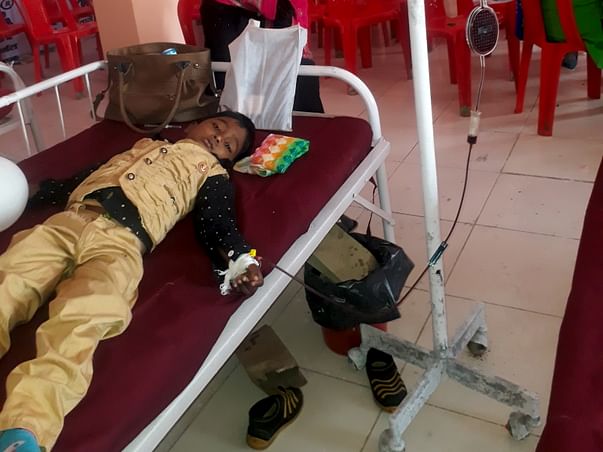 "For the last few months, his (Nazim’s) medicines have cost around Rs 25,000 per month. After work, I go from place to place, home to home, to ask for help and come home at 1 in the morning. I’m that tense about his survival.” – Naeem, Nazim’s father.

4-year-old Nazim has been suffering from Thalassemia Major for almost 4 years now. After years of struggle and hardship, finally, his life-threatening disorder can be cured through a bone marrow transplant. His father, a repairman, has been receiving help for over 3 years and now, has absolutely nothing left to save his son.

Every month seems to be worse than the previous one. Every 20-25 days, the 4-year-old becomes weaker than before, unable to muster the energy to perform normal activities like walking and eating. Right now, he is critical and keeps suffering from frequent fevers and pain.

Nazim has managed to stay alive through monthly blood transfusions, which has not been easy for his father to provide.

“Nowadays, Nazim himself comes to me and says – ‘Papa, take me to the hospital, I need those big needles’. When he utters those words, I can’t describe what I feel. I feel broken from inside because such a small boy has to go through so much.” – Naeem, while weeping.

For over 4 years, Nazim has been undergoing a blood transfusion every month. He simply cannot survive without one. His father, Naeem, has managed to provide for his treatments till now and keep him alive. He has been helped by several people as these monthly transfusions and medications, are much more than his salary.

Apart from the financial difficulties, the 4-year-old hasn’t experienced a normal childhood too.

“Out of fear, I haven’t even started sending him to school. What if he suddenly becomes sick? For the past 4 years, he has been undergoing blood transfusions every month. Immediately after the transfusions, he falls ill for a couple of days, and then he’s okay for around 2 weeks. After that, he starts experiencing weakness, doesn’t feel like eating, moving or playing. I want him to go to school like a normal child and get educated and become successful in life.” – Naeem, extremely disappointed.

In just 6 months from birth, back in 2014, Nazim had loose motions and infections. After treatments failed, Naeem decided to get his son checked up. Since then, Naeem and his family’s lives have turned upside down.

“Back then, I was told that a bone-marrow transplant would help my son live normally. His elder sister (who is now 8 years) wasn’t a 100% match but his younger sister was. She was just 2 years old. I had never heard about Thalassemia in my life before this and other people, who were not very educated too, said that I shouldn’t let my younger daughter be the donor because she is so little. Out of fear, I chose not to but now, Nazim’s condition is worsening. My second daughter is 6 years old and a perfect match, he can survive if he gets the transplant.” – Naeem

Nazim and his elder sisters aged 8 and 6 years old

Only a bone marrow transplant will save Nazim’s life

Nazim’s only hope of survival is to get a bone marrow transplant. The 4-year-old is fortunate enough to have a sibling as a potential donor. But the procedural and surgical costs are way beyond what Naeem can afford. He is running out of time to save his son.

Naeem, a repairman and laborer, is in dire need of help

Naeem works at an electrical shop as a repairman and laborer. He earns just about Rs 8,000 per month and runs a family of 5. His wife, Asma, is a housewife. He has been asking for help for over 3 years now and now, has exhausted all his resources.

“Till now, I’ve spent at least Rs 8 lakhs on his treatments and medicines, out of which, I’ve borrowed around Rs 6 lakhs. I was shocked when I saw that the transplant itself costs around Rs 14 lakhs. On top of that, for treatment, we must move to Vellore (from Bhopal) for 6 months and that’s going to be very expensive. We don’t know anyone there. People in my neighborhood have helped me and so have some people around the shop I work in. My parents and brothers are also poor and can only help me a little bit. I’m so worried.” – Naeem

The total cost of the bone marrow transplant is estimated to be around Rs 14 lakhs, which, Naeem cannot afford even if he works for decades. He is left with no option but crowdfunding.

4-year-old Nazim has not experienced a normal life up till now. He has been suffering from life-threatening Thalassemia Major since he was 6 months old. Now, as his condition worsens, his only hope of survival is to get a bone marrow transplant but his father has absolutely no resources to help him. Naeem needs your help to save his son.

Your support will save 4-year-old Nazim’s life.
This is THALASSEMIA MAJOR REPORT 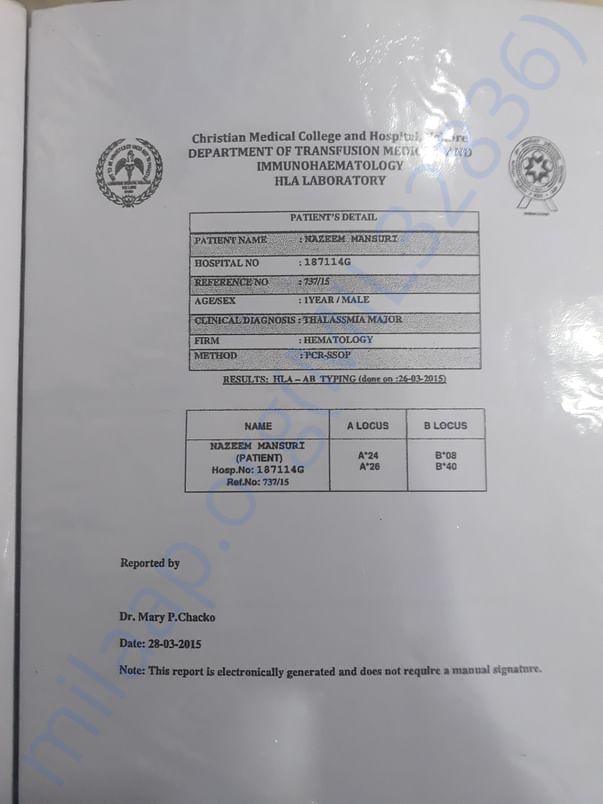 This is DONER HLA MATCHING REPORT 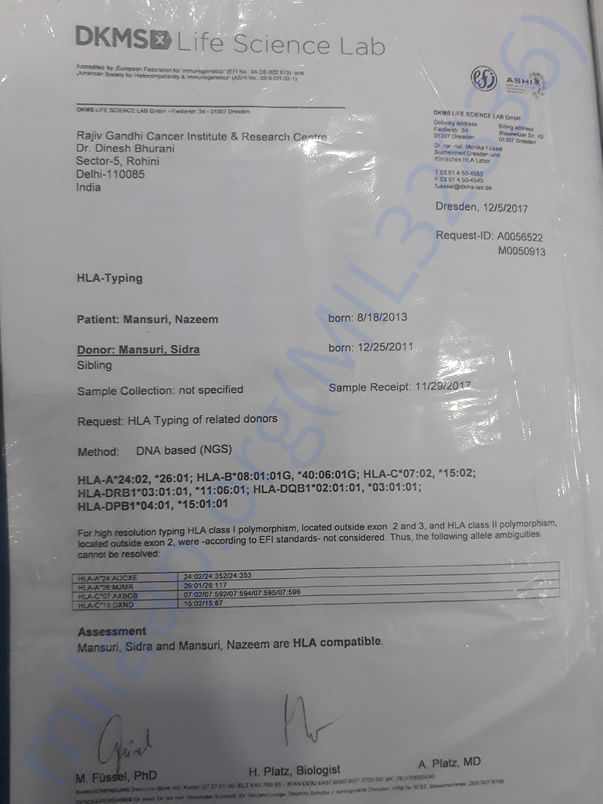 This is estimate CMC VELLORE 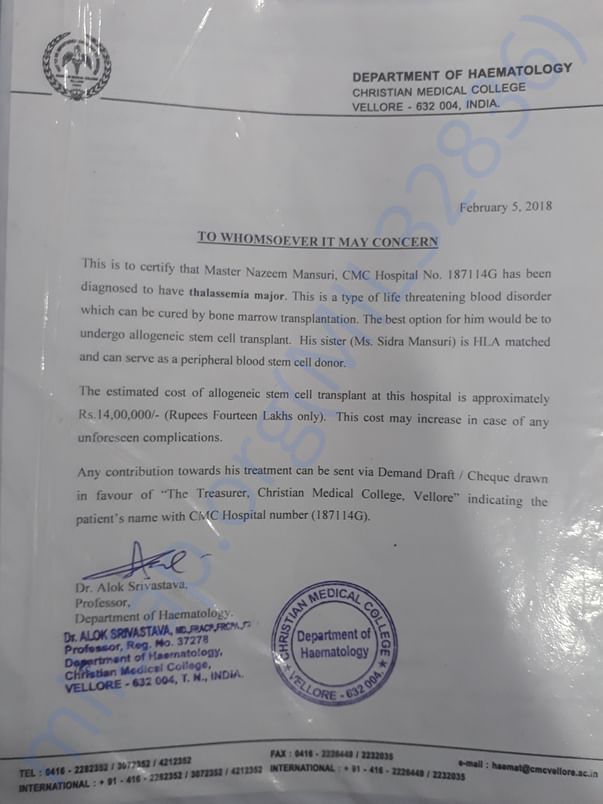 This is patient (nazim) HLA REPORT 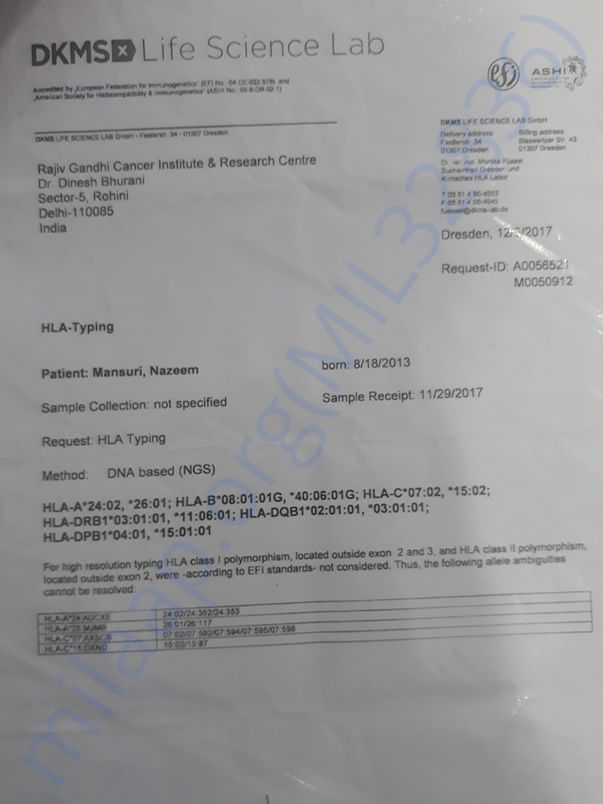 I would like to thank you for your love and support. Here is an update about Nazim.

It has now been six months since he was admitted in the hospital. The first attempt of the bone marrow transplant took place in May and was a failure. The doctors conducted a re-transplant 3 months after that, which took place last week. We are still waiting for his test results.

He is receiving medication and treatment in the hospital and he undergoes various check-ups regularly.

Please keep him in your prayers. Thank you all for your love, support and blessings.

Thank you for the wonderful support that you have shown towards my son Nazim. He has developed a few complications and the doctors have suggested him to undergo some tests. Based on the reports from these tests the doctors will be able to suggest the future course of action.

I would like to thank you for the wonderful support. Please do pray for his health and speedy recovery. Will keep you posted.

Thank you for the wonderful support that you have shown towards my son Nazim. He is doing better compared to earlier and has successfully completed all the initially prescribed cycles of chemotherapies.

Based on his health, he underwent the bone marrow transplant around the 13th of May and his sister donated a part of her bone marrow to him. He has normal side effects like fever, sweating etc and the doctors suggest that this is normal and he would be recovering from them soon.

Thank you for the wonderful support once again. Please do pray for his health and speedy recovery. Will keep you posted.

You are sending a message to
Vic GouR
Go back 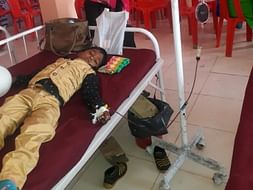