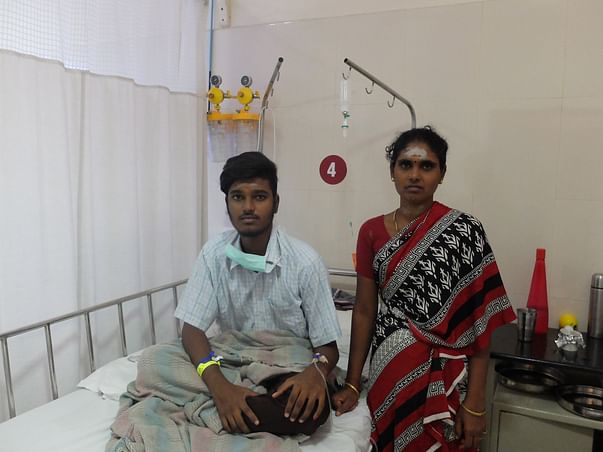 Share
"My son found out that he had cancer through a Whatsapp text. He is trying to deal with the fear all alone because he does not want to cause us pain."
17-year-old Naveen Raj returned from a trip to Kodaikanal, and like it happens with everyone who comes back from a vacation, he caught a fever. Naveen’s fever was not from exhaustion or germs, but a symptom of blood cancer. His parents are distraught, and they are racing to save his life.

When a fever lasts 30 days, you never imagine it could be cancer

Naveen was excited about his last year in school. He was in his 12th grade, and was celebrating with friends in Kodaikanal on a school trip. When he returned with a temperature, his parents did not suspect anything serious. 30 days later, when the fever did not subside, they took him to the local hospital. Upon investigation, Naveen Raj was diagnosed with blood cancer.
“He has been in the hospital for over a month. The doctor has been checking his blood count, and he has been getting frequent blood transfusions. Right now, he needs chemotherapy to beat the disease.”

There is a cure and he has time, the problem is money

Vellaisamy, Naveen’s father, works in a pharmacy in Coimbatore. Her makes around Rs. 9000/month. On this income, he cares for his wife and three children. Naveen is the oldest. This father has not been able to afford chemotherapy and hospitalization charges over the past month. He has taken a loan from the pharmacy, and used his savings to pay the bills.
“I just want him to get better. The doctors say he can be cured with this treatment, and if we can just somehow get the money, then my son’s life can be saved! I thank god for helping us find out at the right time. What if we had found out late? At least we have the time to save him.”

Naveen was looking forward to life, and now he is losing hope

Naveen did not know about the diagnosis initially. Vellaisamy told him that his blood count was low and he needed treatment. Unfortunately, one day, Naveen came across a Whatsapp text on his father’s phone that spoke of his condition. Since then he has not been the same.
“He used to be so positive. I can see that it has changed him. He is always irritated or frustrated. When we talk to him, he acts like everything is ok. He convinces us that he will be alright. I see that my son is dull and he is losing hope.”

Naveen’s treatment is estimated to cost Rs. 7 lakhs and his father cannot afford to fund it. He was looking forward to the end of a new chapter in his life and a start of a new era. He never imagined it could the end of it all.
Your contribution can save his life and make his dream come true.